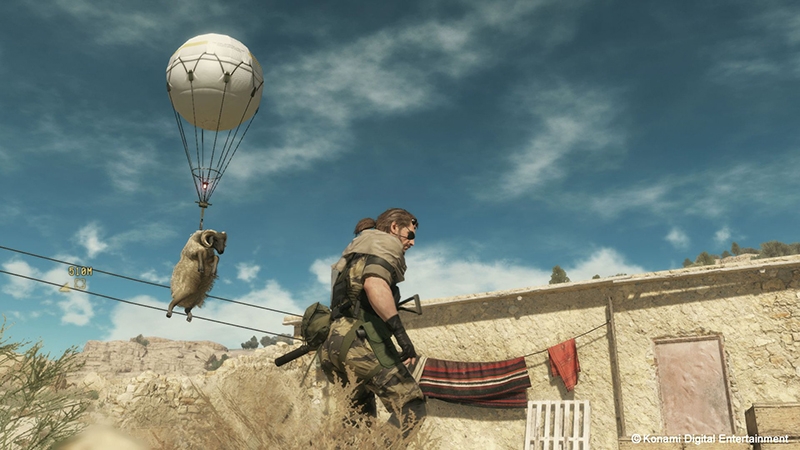 I'll take out the two guys on the left. Ram, be my eyes and ears!

My favorite non-Nintendo game of day two of E3 was Metal Gear Solid V: The Phantom Pain, developed by Kojima productions and published by Konami. I didn’t get any hands-on time with the game, but the presentation I watched has sold me on it. There aren’t a lot of games that can impress me or make me laugh as much as this one did in the 20 minutes of gameplay I saw. Admittedly, a lot of that is my sense of humor, but I’m pretty sure that everyone can have a chuckle after hooking up a balloon-like device to a sheep and watching it rocket away. If you’ve played the previous entry, Peace Walkers, you should be familiar with the Fulton Recovery system. If you haven’t, you are in for a treat. Snake can knock enemies out, attach a Fulton ballon to them, watch them fly away and magically, they’re recruited to your Diamond Dog team once they arrive at the base. I guess a flight like that would change any man. It doesn’t stop with people, you can Fulton virtually anything–vehicles, animals, large containers and it will all be waiting for you when you return to home base.
Your base is a sweet set-up in the middle of the ocean. Everything you Fulton ends up there and you receive in-game currency for all of the things you send back, which allows you to upgrade your base. You can add defenses to protect the base while you’re away, and you can always add more space for all the Jeeps and sheep you’ll be Fultoning. Your home base is always accessible through your little eye-droid buddy that comes along on missions. You can assign new personnel to help you out in a pinch, order an airstrike, GPS, artillery and all sorts of other mission-related things.
The gameplay looks like a ton of fun. Sneaking up on enemies is easier than ever with the new, and improved cardboard box! I couldn’t tell you why this made me happy, but it did. They actually did improve the box to make it more versatile–Snake can now jump out the side of the box and leave it as a decoy in case he gets spotted or the top to surprise enemies. I couldn’t help but think, “Surprise Mothaf***as!” whenever he popped up and grabbed enemies. You can even customize the box to the environment. I know that seems like a ridiculous amount of words to describe a stupid cardboard box, but it’s Snake’s signature, so I feel it deserves they hype. The rest of the gameplay is pretty standard–you can mark enemies, even through objects, to keep an eye on them, you can use a prosthetic arm to make lure sounds, and you can react to enemies quickly. If an enemy spots you sans box, time will slow down and you have a small window in which to shoot the baddy without him shooting first. There are stealth mechanics as well–you can crawl through grass and somersault past enemy’s vision, which made me think two things: One, a cheer, “Knock ‘em down, roll around, come on defense, work!” and two, “Dat Snake ass tho!”
The icing on the cake is the beauty of the open world in all of its 1080p and 60fps glory, everything looks as realistic as possible, right down to your horse taking a dump. It doesn’t get more real life than that. Back to the pretty parts of the game–you can see gorgeous mountains and populated villages off in the distance and zoom in on them with your nifty eye-droid. You can explore the world to get the best vantage point to scout out your targets–then mark them to keep track of them as you storm the castle, so to speak. The real-time weather can also play a part in your missions–such as sandstorms start up to obscure not only your enemy’s vision, but yours as well.
I can’t wait to get my hands on a playable demo of this game. The Fulton recovery system alone is worth a play, and it looks like there’s so much there to explore that you could literally get lost in the game. It’s beautiful, funny and smart–everything you could possibly want. It’s rumored to have an early 2015 release, but the pre-orders on Amazon have until the end of this year. I am really hoping Konami brings a tricked out cardboard box to the next convention so I can take a picture in it, being all stealthy and stuff.
Photos: