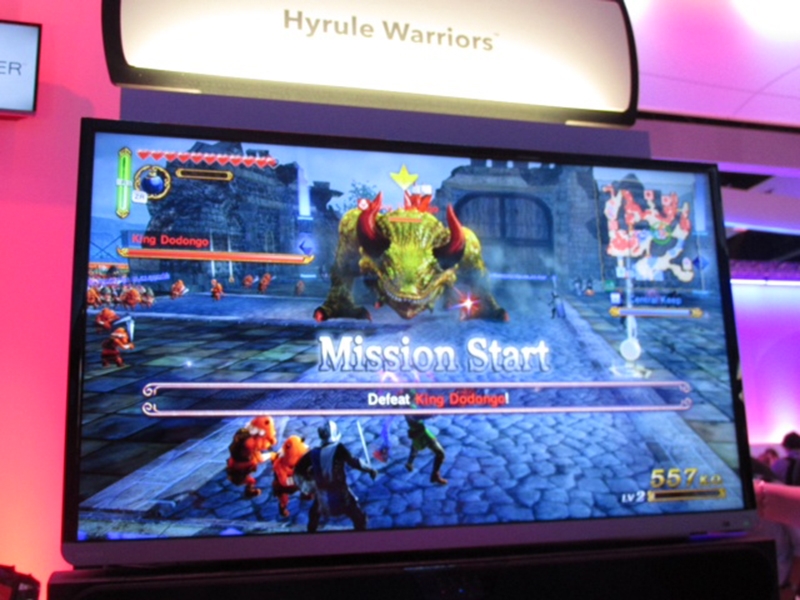 Dude, why are we following this crazy elf into battle?
Day two involved a lot of surprises for me. Metal Gear Solid was never really a game I expected to love. I loved it so much, I ended up writing an entire piece about it. Hyrule Warriors had never really piqued my interest before, but if figured I would give it a shot–it is Zelda, after all. After my play through, I’m stoked that it’s one of the few being released this year instead of next. Atlus had its own surprise in Citizens of Earth–a quirky little RPG with some great dialogue that is sure to make you smile.
Even on day two of E3, I still can’t get to all of the awesomeness that Nintendo announced. Splatoon and Mario Maker are still on my list to check out so here’s hoping that I can get to both on day three. I finally managed to get through the Hyrule Warriors line, and it was definitely worth the wait. Zelda and Link were the only playable characters in the demo, and it’s nice to see Zelda out on the field.
The demo only took you through a few missions, but you could always make your demo last by experimenting with combos while fighting the ever-spawning moblins. The gameplay is easy to pick up–you have a different move set on each of the X and Y buttons, and you can combine them and perform some sweet combos. You also have a special attack that you can perform once you fill up your attack gauge–the attacks look amazing, and they’re done in the Dynasty Warrior tradition of dramatic flair. There’s something satisfying about getting 100 KOs at once as Link. The last thing I got to do was take out King Dodongo–he looks much cooler in this game than he did in Ocarina. It’s the same takedown strategy–bomb in the mouth to stun him, attack like crazy once he’s down. There isn’t the arbitrary hit limit like bosses of old, so I took the king down in one combo. Hyrule Warriors left me wanting more in the best way possible, so it’s a good thing I already have my Wii U.

Next up in the Nintendo booth was Yoshi’s Wooly World. Kirby’s Epic Yarn was such a hit that Nintendo has decided to crochet another one of its beloved IPs. Yoshi was cute before, but all done up with yarn, Yoshi is adorable. The detail in this game is amazing–you can see the little errant hairs that you get with wool and yarn strings as Yoshi wanders through his new world. It looks so good, you forget that it’s on the Wii U and not one of the other next-gen consoles. The co-op play is fun, and reminiscent of the New Super Mario Bros., except here, you can accidentally turn your friend into an egg. You can’t “bubble” like you could before, but if your teammate falls off-screen, they’ll turn into a flying egg. There are new yarn mechanics–things with a bow can be “tongued” and unraveled to reveal secret passages or treasure. Yoshi’s tongue is his most powerful weapon in this Wooly World.

The last I got to play in the Nintendo booth was Captain Toad: Treasure Tracker. This was a series of mini-games that were originally featured in Super Mario 3D World and I couldn’t be happier that he’s getting his own game. Toad is absolutely defenseless in these games so you’ll have to use strategy and timing to get him through his paces. The camera angles are a huge part of this game, as you can only see certain things from particular angles. It takes a lot of patience to move Toad around the map, but it’s a great feeling when you collect everything the map has to offer and get to the star at the end. Looks like our little mini-game is all grown up.
After finishing up with Nintendo, I made my way over to the Atlus booth. Atlus has always been one of my favorite publishers. There’s always some weird RPG or JRPG that they’re involved in that seems weird, but Atlus and the developers make it work. One such RPG is Citizens of Earth. You play as the Vice President of the World–off to a weird start already. You’ve just won the election and you decide to celebrate with your family–your brother and your mother. You walk outside and see that a ton of protestors are wandering your town. They don’t seem to be too happy about your recent win. Naturally, that means a battle – your family uses powerful attacks like Nag and Roughhouse to take down opponents. Everybody in town is either a recruitable friend or an enemy to defeat. Most people need some favors before they’ll join your ranks, but that’s to be expected. Can’t get something for nothing anywhere these days. Citizens of Earth is a quirky RPG that’s amusing and will make you smile in October.
Day three is going to be about finishing up Nintendo’s lineup and then Indiecade! Every time I walk by that booth it looks like everybody is having a damn good time.
Photos: