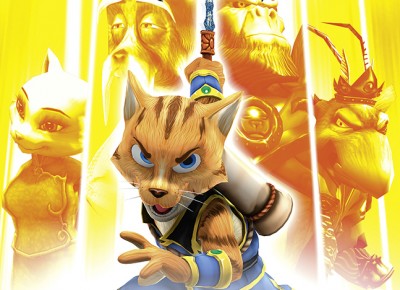 Legend of Kay Anniversary Edition is a remaster of an old Playstation 2 game. While I enjoyed playing Kay in the end, I’m not sure why this game was re-made. It’s a damn fine mix of platforming and combat, with some seriously annoying voice acting and meh dialogue—I played most of the game on mute. The story itself is pretty typical—save the word from the big bads that are trying to run the world.

In the world of Legend of Kay, you explore the island of Yengshing, full of cats, rabbits, frogs, and pandas. Back in the good old days, everyone believed in “The Way”—the belief in essential goodness of life. Whatever that means, it seems more like a way to view life, not a religion. Everyone began to wander, as all sheep in flocks do eventually do, allowing evil to become empowered—gorillas and rats began to take over the world. Gorillas provide most of the muscle (duh) and are led by General Shun. The rats are the brains, acting as alchemists with General Tak at the head—he’s annoying as all get out to listen to. They’re after a hidden power that will seal their grip on the island.

We start in Cat Village, with our main character having a conversation about the good ole days, and how everyone needs to get back to “The Way” in order to fix everything. Kay shrugs it off, saying the gorillas, led by General Shun, only won because they were strong and better fighters—that’s all our little cat cares about, the fighting. His sensei is a drunken old fool of a cat—your first encounter with him is helping him to bed because he is drunk off his ass. He does manage to sober up long enough to teach you what you need to know.

The battles are actually pretty fun. They require a bit more skill than simple button mashing—there’s a move that you can do that gets you behind the enemy to kick their ass, literally. It’s fluid for the most part, some boss battles didn’t go right—without hitting any buttons, Kay would inexplicably attack the boss and get attacked. You can buy armor to double your hit points for the tough battles and you acquire a few different types of weapons—you start with a sword, then claws—think Wolverine, not kitty cat claws—and a hammer. The camera controls were also a little lacking, and frustrating as hell—I could never get the angle I needed, which caused a few unnecessary deaths.

I’m not sure why Kay is a legend. The whole game is based on him chasing after Tak because he shut his stupid school down. It’s rationalized later, but that’s what gets him started—not because the rats and gorillas are encroaching on people’s freedoms or anything important like that. He’s more like a petulant brat with some karate skills, than some legendary hero. He gets less annoying as the game wears on, but he’s real hard to put up with in the beginning. Most of the henchmen you’ll encounter are low-level intelligence—we’re talking stereotypical, “Me like bananas. Hate cats” kind of dialogue, which makes any interaction with them irritating, but it’s definitely satisfying to shut their traps for them.

The graphics update is well done, the game looks great, but the animations of the characters aren’t synced up very well and it made dialogue scenes tough to watch. The game feels a tad bit empty—the backgrounds don’t have a whole lot of detail to them. The cutscenes are still done in the comic book-like style that the original had. I managed to find a game crashing bug, because it’s ridiculously easy to find. After one of the cut scenes, I thought my Wii U gamepad had died—the screen was black and there was only white noise—it’s a pretty big bug to miss. I had to restart and go through 20 minutes worth of re-work, only for the game to fail again at the exact same spot. I hung my head, hit restart and skipped the scene to escape the loop.

Despite the problems I have with the voice acting, Legend of Kay is a lot of bang for your buck. It’s got a decent story length, fun combat and it looks fairly decent. I enjoyed my time with Kay—at one point, you essentially beat up a bunch of turtles that look suspiciously like Michelangelo—so it’s worth a look. $25 is a good price for everything that comes in the package.