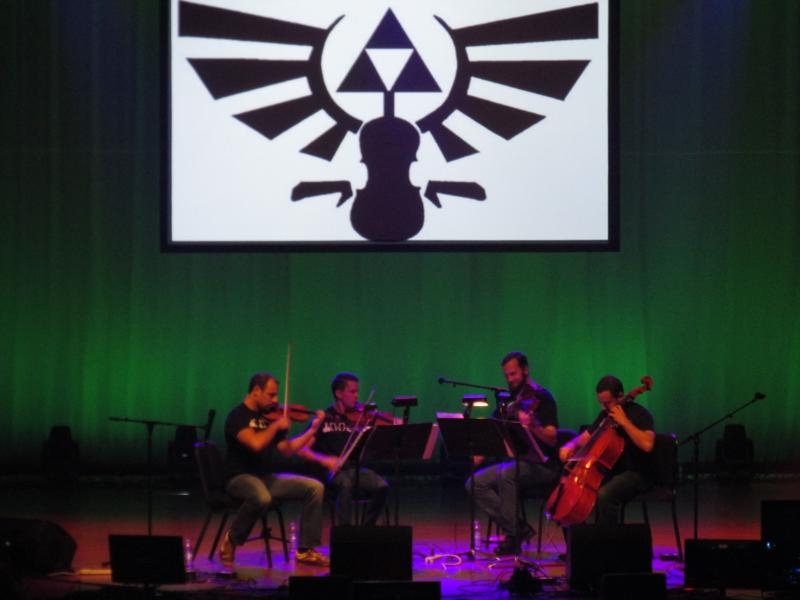 The Triforce Quartet rocking out to a Zelda medley. Photo: Ashley Lippert

This year, Penny-Arcade Expo (PAX) celebrated its ten-year anniversary—for a decade now, PAX has been a gamer haven. During each PAX Expo, the downtown Seattle streets are flooded with people from all over the country who just want to play video games all day. Some of them spend most of their time standing in line waiting to play video games, while others hang out in freeplay areas to play a huge assortment of games in all the different areas of gaming: tabletop, console, and PC. PAX Prime 2014 is also home to the League of Legends (LoL) North American Regionals this year, so a ton of people gathered around giant screens set up in the queue room to watch their favorite teams fight it out.

I’ve written about PAX before, but there is one thing that isn’t mentioned—PAX concerts. I didn’t make it to all of the shows, but I did manage to catch the Triforce Quartet. These guys are a traditional quartet—two violins, a viola and a cello—and they are a fun show. Only at PAX can you cheer and whoop during a classical concert. They played a few medleys from Zelda, Mario and Final Fantasy and a few random songs in between—the Banjo Kazooie theme was a welcome surprise. They engaged the audience and encouraged our cheers—it was a beautiful end to the first night of PAX.

The PAX founders, Jerry Holkins and Mike Krahulik, are big Dungeons and Dragons fans. A few years ago, they started a D&D group called Acquisitions Incorporated. They started off in podcast form and they now do them at the different PAXes with some seriously funny theatrics. The dungeon master, Chris Perkins, was dressed in something that reminded me of one of those old fortune-teller machines. Everyone else had at least one article of clothing their character would be wearing and it really added to the look of the show. These guys are a great team and they know how to make an audience laugh. Along with the Omegathon, this is a PAX event you should experience at least once.

I really wanted to focus on some of the games I sampled while I wandered the Expo hall. I started off with a cute little game I’ve heard about over the Internet, Catlateral Damage. It’s adorable, and you can tell that it’s for all the cat people out there. You play from the point of view of a cat, doing what cats do best—knocking everything on to the floor. It sounds ridiculous, but some cat fans seriously need this game. Using the triggers as paws, you roam around a room, getting points for everything you knock to the floor. It’s out as a demo on their website now, they’re hoping to have it completed sometime this year for PC users.

Next up, I wandered over to the Spry Fox booth. They had a game that caught my attention with just a name—Freerange Dragons. It sounds like they’re relating dragons to chickens, but it’s a fun game. You fly around on a dragon, trying to collect loot and other dragons to tame. You fly faster through foliage, speeding around floating islands like Sonic the Hedgehog. This is a major advantage as you try to outrun dragons that are more than a little miffed that you stole their gold. Stealing their gold isn’t easy either, you have to essentially knock out the dragon carrying your loot with a fiery head-butt, nab their gold and take off. Once you’ve deposited your gold in your handy bank, you can take out the dragon and add him to your dragon mount collection. The art style has brighter colors and differs a little from their other games—the dragons are cutesy with really big heads and eyes and snake-like bodies. I only got to play the alpha build, but I can’t wait to see where the game goes from here.

As I continued to navigate the craziness of the Expo hall, I found a game called Moonrise. Being a Pokémon fan, it’s hard for me to see anything that involves the capturing and training of monsters as anything other than a rip off of one of my favorite franchises. Moonrise sets itself apart from Pokémon with a definitively different art style and updated battling. The monster and world design is beautiful. It won’t be as free-roaming as Pokémon, but it has such a gorgeous world to explore, I don’t think I’ll mind. In the game, you play as a warden that’s trying to cure the Solari from the dark powers of the moonrise. It infects the Solari, turning them into dangerous and violent Lunari. The battles are in real time instead of turn-based—you attack whenever your attack meter regenerates from the last attack. Even the trainers, or wardens, as they’re called, get involved in the battle. They learn attacks and new skills as they level up as well. It’ll be free to play, but it won’t be a pay-to-win kind of game. It’s set to come out in the spring of next year, right around the time I get finished with the new set of Pokémon games.

The last game I managed to squeeze in was one I’ve been curious about for a long time, Disney Fantasia: Music Evolved. It comes off as just another dancing game, but instead of the stereotypical follow-the-lead gameplay, Fantasia took a different route. You use sweeping hand motions for a more fluid experience. There’s no real dancing involved, Fantasia goes for experience rather than the whole dance craze. The only demo they had at PAX was of their songs, they didn’t have any other gameplay available, so I didn’t get a look at any of the single player campaign or check out the worlds that Fantasia has to offer. I will say that based off the music gameplay, it’s an interesting twist on the music genre.

It was a great show this year with a ton of great games. Some of the lines were a bit ridiculous, but with 20 minute demos and only eight stations, it’s to be expected. I know I missed out on a lot of big games due to the sad state of the lines. It’s not on PAX, but it did make it hard to play a lot of the games I wanted to. That’s my only criticism, and it’s one that nothing can really be done about.