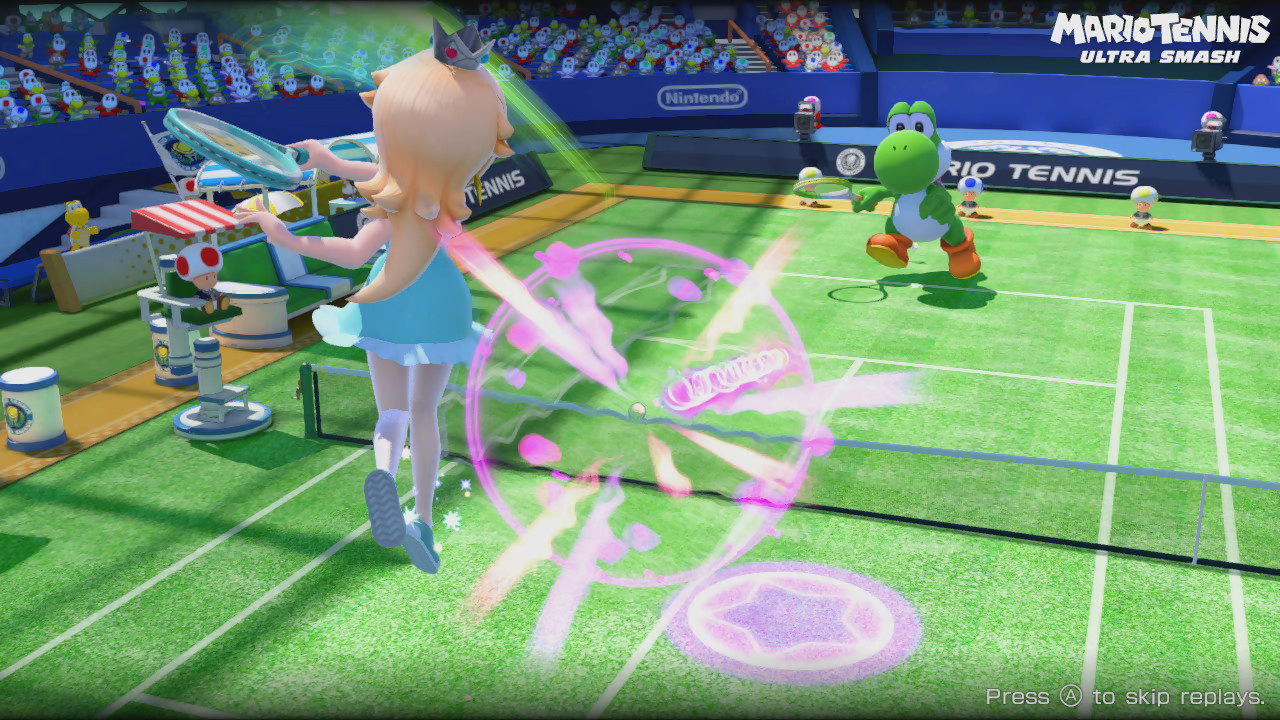 Nintendo’s been trying for years to make good games out of some of the more uneventful sports, like golf and tennis. It’s weird that those are the only two specific sports games that have made it past the Wii (so far). Golf is a notoriously boring sport that doesn’t seem like it would work well as a video game, but Nintendo made some great Mario Golf games and the series has done well. Tennis is a hard to make interesting as a video game—all you do is hit a ball back and forth. Mario Tennis: Ultra Smash may be the last we see of the Mario Tennis with how little there is to do, no matter how beautiful it looks on the Wii U.

The biggest addition in Mario Tennis: Ultra Smash is the Mega Battles. Instead of a simple match, Toads throw mega mushrooms from the sidelines that supersize you into quite the formidable foe. You’ve got more power and obviously more reach, but you’re more susceptible to getting smacked in the face by a ball. While it’s quite a spectacle, it’s more of a distraction than anything. There’s a small scene every time someone runs into a mega mushroom, whether it’s right in the middle of your stroke or you rushing to get the ball, stopping the game dead in its tracks. 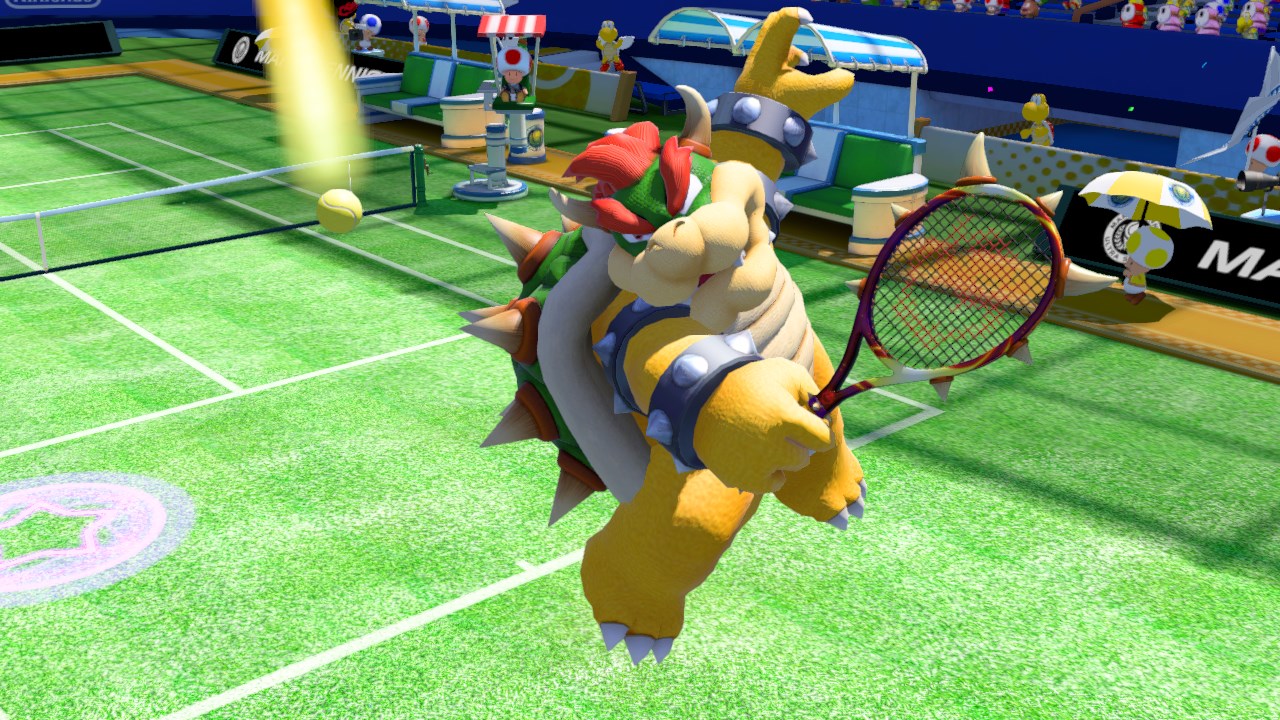 The other, more interesting addition is the new shots you can perform, especially the sweet jump shot. Just like in the other games, a circle appears around the general area the ball will fall to—except that now there are two areas, one for the jump shot and one for the actual ball drop. Catching the ball mid-air and smashing it to the other player’s court was extremely satisfying, especially because they’re pretty hard to send back. It’s the best part of the game but it’s not quite enough to keep the matches interesting. After each match you play, you earn coins that you can use to buy your way out of challenges or upgrade your amiibo.

There are only a few ways to play on your own—Classic mode, Mega Battles, Mega Ball Rally and Knockout Challenges. Classic and Mega Battles are where you can go up against your friends to see who’s the best. The Mega Ball Rally is simply trying to keep the volley going as long as possible—better described as a really pretty version of Pong. It’s the silliest game mode that highlights the most boring part of tennis. The Knockout Challenge mode is you facing opponent after opponent to see how many you can beat consecutively.

The amiibos make their appearance as your doubles partner in the Knockout challenges and online matches. They can be very frustratingly underfoot in the knockout challenges until they’re trained up, and it takes five rounds for them to gain one random ability—such as ball control, skill, agility, curve, speed, acceleration, better serves or stronger strokes. There’s 10 slots to fill up, which amps up the abilities that duplicate—you can also re-roll the abilities in amiibo training to get the abilities you want, for a price. It’s a costly process, in both time and money, and truth be told, they’re not worth it. They don’t play a whole lot better, even with the skills, and it just felt like a waste. 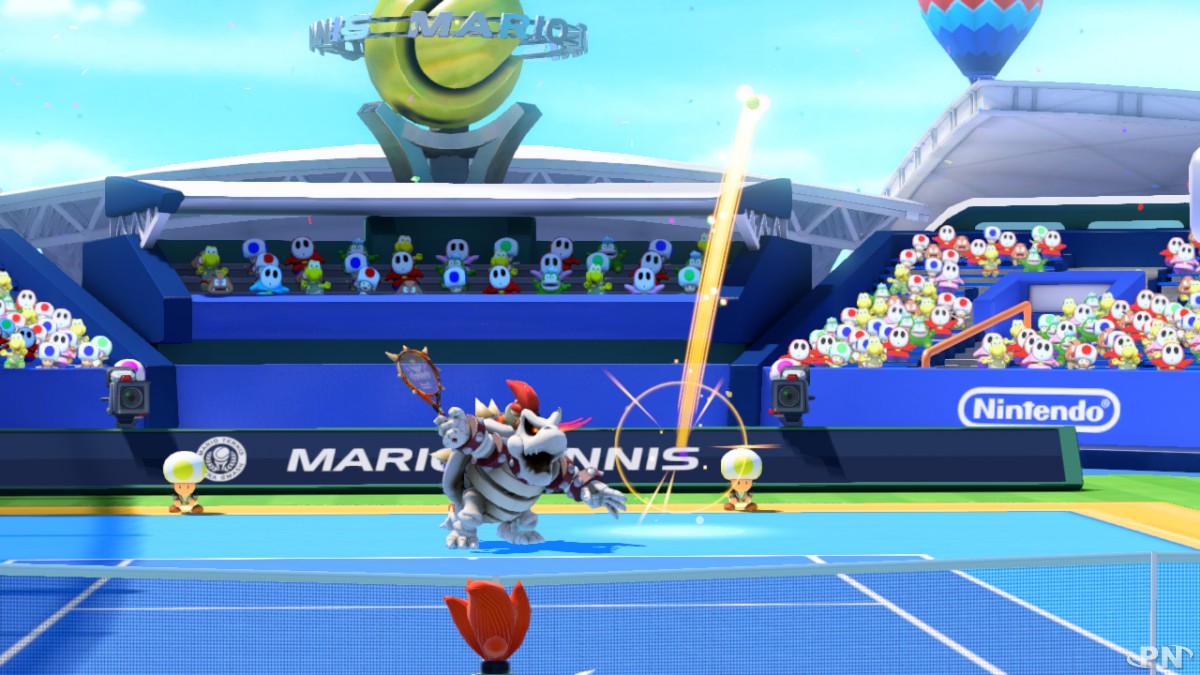 I was really disappointed in Mario Tennis: Ultra Smash, since it was the same developer that handled Mario Golf: World Tour, which I loved. Nothing was really improved upon, there was just the addition of a gimmick that doesn’t add anything to your experience. The amount of content is abysmal for a Wii U game and it’s not enough to keep you playing for more than an hour or two. Even with friends, it’s not all that fun and I wish that that Nintendo had chosen to give Mario Golf the Wii U treatment—Ultra Smash has the gorgeous graphics going for it. Ultra Smash is just that, all smash and no substance.