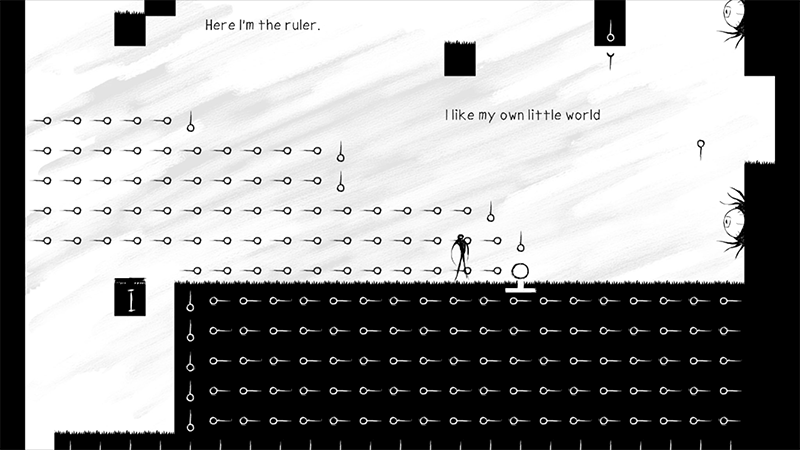 Here I rule over eyes and black-and-white blocks!

The fear of interacting with people can be crippling for those with Social Anxiety Disorder—Sym is about Josh, a boy suffering with this disorder. The whole game feels like you’re walking through Josh’s sketchbook—the graphics look hand drawn, some things are constantly moving and there are words everywhere. You play as two different versions of Josh—a black, stick-like figure that runs around in the world, and a white, cocooned version of himself that delves into the ground, hidden from the world. It’s a great metaphor that happens to make this platformer one of the most interesting games I’ve played—and a little disconcerting at the same time. The gameplay is simple, but it’s far from easy. You have to be very precise to get through all of the levels—one wrong step, and you’re done. My computer is a little too expensive to throw against the wall, but believe me, swear words were yelled. Once you manage to beat the main game, there’s a level editor so you can create your own levels, share them with your steam peeps and play theirs. It’s a great platformer for $8 that may open your eyes to a different perspective. –Ashley Lippert