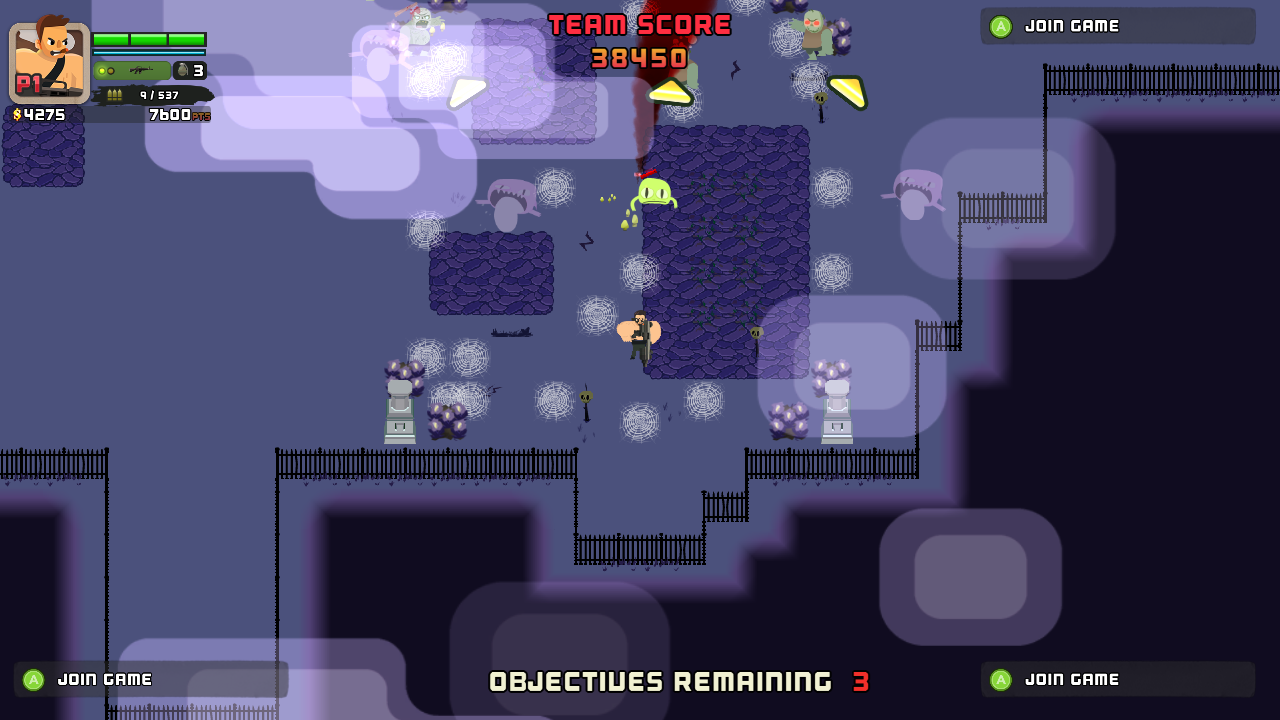 Every time I completed a mission in Tango Fiesta, I did that fist pump with a “Hoo-hah!” It felt like the right thing to do because I felt like Rambo—kickin’ ass and taking names. This is a top-down shooter with all sorts of crazy character stereotypes, hilarious dialogue from an older era and the old-school graphics to match. This may sound like it’s an awful game, but just like you would enjoy a bad ’80s movie, I enjoyed Tango Fiesta.

John Strong is your typical macho hero—buff and only good for killing things. Tango Fiesta is narrated by his older self, who is, obviously “too old for this shit” as he tells you about his most insane adventure through time and space, with you playing as his younger self. You can also play as other people that you meet on your missions—Bionic Cop, Conchita, Dr. Henk, etc. They’re all stereotypical, and each has their own set of one-liners that are pretty great.

The story in Tango Fiesta starts off pretty normal—an old friend kidnaps Johnny’s girlfriend and he has to rescue her. Pretty standard stuff. It starts to get weird after you confront your old “friend.” He tells you of a queen that corrupted him, which obviously means she needs to be slain at all costs. John manages to track her down, but she’s more than he expected—more than anyone is going to expect, I reckon. She’s a bitch to kill, but once you do you’re transported into the future where you’ll meet with the KIllionaire—which is such a great name. The Killionaire has a dungeon full of guards, spikes and an audience to watch you scramble for survival.

Once you escape the dungeon of horrors, you move on to the zombie apocalypse part of the game. There’s something about a Twinkie that is causing all of your problems (no joke), and it’s ripped holes in continuums and all that mythical junk that brings the zombies and ghosts around to murder you. That’s not all folks—we’re missing one more classic ’80s movie trope—a robotic cop. Bionic cop makes his appearance in the last part of the series and it’s a fantastic way to end the game.

There are only two different types of objectives on your missions: Seek and destroy or signal jamming. Sometimes you’re just blowing up houses. Other, more annoying times, you’re taking down helicopters. The signal jamming is a pain in the ass since you have to remain stationary while your enemies descend upon you. Between you and these objectives are many a different minion that will follow you until they’ve either been taken out or they succeed in taking you down, and each level is procedurally generated to keep it from being too boring. You can even destroy everything that stands in your way in the levels—pesky trees and shrubberies, for example.

Your arsenal is also easily upgraded and purchased so you can be all you can be. You get the classic guns—shotgun and its sawn off counterpart, Uzis and Hong Kongs. You also get things like the chainsaw, and a few weird things like a ghost trap and sludge grenades for all your otherworldly needs. It’s a shiny array of weapons that you can unlock and use to destroy your enemies.

Tango Fiesta is a game to play with your friends to simply destroy all the things in sight. It’s a quick connect process and it’s god damned fun with friends. It’s a good shoot ‘em up game, with wacky and terrible dialogue that’s straight out of all those macho man movies from the old days. It’s more fun than I thought it would be and it’s worth investing some time in for the crazy ass story alone.