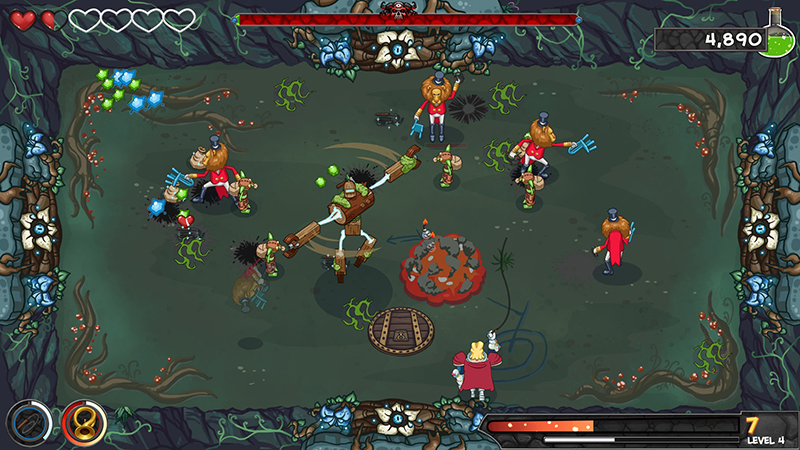 It’s clear that The Weaponographist is hoping to insert itself as a new entry in the rapidly diversifying roguelike genre. It’s got a town full of upgrade-peddlers, progressively difficult enemies and vaguely retro gameplay mechanics. The problem is that the game doesn’t do much to set itself apart from its more acclaimed brethren. Taking the role of protagonist is a blond, square-jawed princely type named Doug McGrave (get it?), who is tasked with entering a monster-filled dungeon, dying and doing it all over again. Once in the dungeon, Doug is pitted against all kinds of enemies, from tommy-gun toting gangsters to bullwhip brandishing lions. Each enemy drops a specific weapon that Doug can equip in his quest to collect green ooze that can be spent on upgrades. The game’s focus on each weapon’s strengths and weaknesses is solid, but the character animations and combat feel like they’d be more at home on your favorite mobile device. The Weaponographist is mildly entertaining right up until the first boss fight, but it goes downhill from there. The increased frequency and difficulty of the random enemies becomes aggravating as Doug’s slow-as-molasses attack speed desperately tries to keep up. –Alex Springer