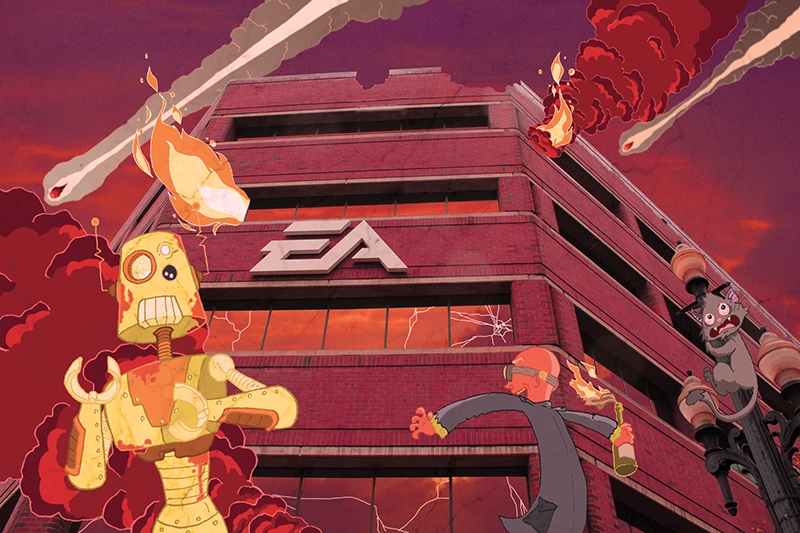 The dystopian societies of The Sims 3: Into The Future are built in our very own backyard. Illustration: Brady Gambles

Have you noticed that giant EA logo at the corner of 300 South and State? EA Salt Lake, formerly Headgate Studios, began producing software in 1992 and moved from its original home in Bountiful to downtown SLC in July of 2010. Originally strictly developing for Sierra Entertainment, they went on to produce Tiger Woods Golf for PC before being purchased and rolled into the fold of EA. I had one simple mission: to play the new Sims 3: Into the Future Expansion and make it my bitch. The entryway is a long hallway that smells distinctly like a gym, and you wouldn’t imagine that you are one elevator ride away from a gorgeous development studio. As I enter, I meet a friendly guard who goes to find Rachel Steinberg from EA in Redwood City, Calif. She introduces me to Lauren McLemore, a producer of The Sims, and then whisks me around their incredible setup. Central to everything is an art board where employees can draw freely to let off steam or show off their skills. This mural, in its early stages, has everything ranging from detailed caricatures to cheering stick figures. Heading past the mural in different directions, we reach the Quality Assurance Team (in charge of testing all games being developed), the artists, the engineers and, of course, the audio team. Last but not least, we stroll by a giant-sized Monopoly car figure from EA’s debut of Monopoly Street a few years ago. “This car is a popular photo spot,” says Steinberg. McLemore proceeds to gush, saying, “When I interviewed here, I took my picture with it on the way out, just to say I had been here.”

While she walks me through the new worlds and features of The Sims, McLemore tells me about her transition to EA Salt Lake. “I worked for Bioware before applying for this position,” she says. Bioware is responsible for some of the biggest role-playing games to date, including Mass Effect, Dragon Age and many others. She says, “I’ve always been a huge Sims fan, so it’s been amazing being able to help produce and continue the story.” The story that she is helping continue is quite unique.
“Complexity” isn’t a word I would normally associate with The Sims, but after sitting with McLemore, I can honestly say that this is no longer a “casual game.” “This franchise has sold 175 million copies,” says Steinberg. “It has progressed so far since its inception.” The Sims is built on the premise of developing a city as well as telling a story of a family—your family. You help them pick jobs, modify traits, and send them to work, as well as feed and clothe them. As you purchase expansions, you gain more traits, clothing, skill sets and worlds to explore and master.  It uses multiple view angles, but generally begins overhead. You can then navigate between the city maps, world map, or zoom in on your Sims as they go about their business. You can purchase items for your home or Sims in the Buy/Shop mode, sell items for money or head out on the town with your loved ones—there is so much to do and so little time.
As I ran through the basics of the new game, it became unbelievably clear that I suck at it. “At 10 a.m. each day, a portal appears, and Emit comes through,” says McLemore. As promised, the portal appeared and McLemore continued, saying, “You can step through the portal to hang out for a while or build an entirely new life in the future.” Adding the future makes this game bigger than anything this franchise has seen. Players can run quest chains to create three different types of futures to explore and jump between with an amount of effort. My favorite type is the dystopian future filled with violent meteor strikes, unkempt streets and Sims with the toughest of survival skills, including bug eating.  Along with dystopia, you also have the option to enter a utopian future or a normal future that has simply advanced without any drastic changes, positive or negative.
The best new trait added with The Sims 3: Into the Future is robot-fanatic. Plumbots are artificially intelligent beings that can be purchased, designed and integrated into your family. Whether you are a skilled robot-fanatic with the ability to build and create your own, or a professional wind carver with enough cash to buy them in bulk, these creations can become an integral part of your story. It is important to note that skills and items acquired in the future are not bound to that timeline. It is completely possible to design futuristic clothing and return to the present to sell your spaced-out wares. For those hoping to gain wealth in a less industrious fashion, you can risk checking the winning lottery numbers from your time and head back to play those numbers, making you the world’s richest Sim. Of course, there is a chance you can get caught, but what fun is life without a little gambling, one way or another?
Leaving the building, I can’t help but feel pride that a little studio that started in Bountiful has become part of a gaming powerhouse and has helped shape the industry I love. The Sims 3: Into the Future is available now via Origin, or at your usual brick-and-mortar PC game vendor.
Photos: