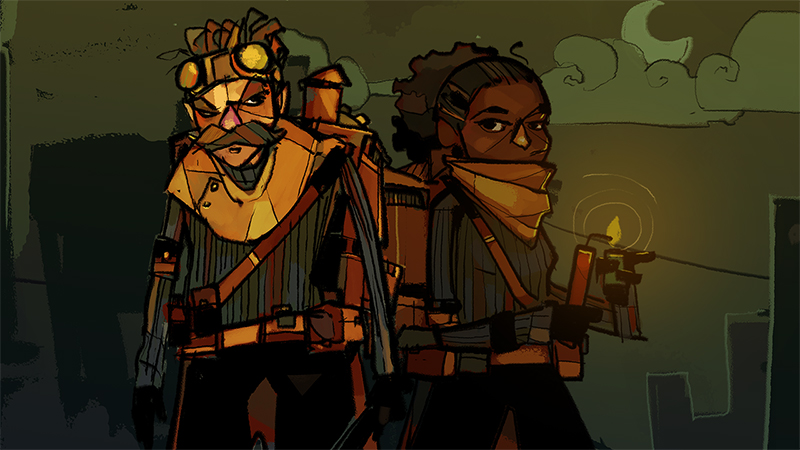 The Swindle is a cool little heist game with a nifty steampunk aesthetic. It’s set in 1849 London, where Scotland Yard is on the verge of implementing an end-all-be-all surveillance system—the Devil’s Basilisk. As a master thief, your duty is clear—steal the Basilisk to protect your livelihood as a crook. You only have 100 days to complete this task, which means many a restarted game until you finally manage to steal enough money and get to the Basilisk. Here’s where the steampunk theme comes in: The police “officers” are robots, each with unique abilities and ways to murder your criminal ass—assuming they catch you, of course. Each “cop” has a visible line of sight for you to avoid while you’re robbing the place. As your payouts get higher, so does security—making staying out of sight a difficult challenge as the game goes on.

You have your own arsenal to combat these robocops—bombs, backpacks that emit steam to hide you and your footsteps, bugs to siphon funds from computers and, naturally, an EMP. There’s nothing more satisfying than throwing a bomb into a bunch of robots and watching them go BOOM! The EMP is also quite a sight to behold. It’s one of the most expensive tools, but it’s totally worth it. The steam pack is also a sweet effect—it’s beautifully animated, and it’s effective for getting you out of tight spot.

You can also upgrade your thief with all sorts of powers—hacking computers and, eventually, the robots, double jumps, stronger punches—even the ability to pass through walls. Hacking is the first ability you can obtain, and it’s also the most important. Without it, you get dramatically smaller takes, and you get nowhere. The other abilities become more and more essential—being able to take out the more powerful robots in one punch is crucial to getting around them, and you’ll need the strength to get through the tougher windows down the line.

Each level in The Swindle is procedurally generated so you can’t memorize the layout for your heists. This helps replayability, but sometimes, the levels turn out ridiculous to the point where you look at it, shake your head, curse the level and jump to the next day, costing you time and money. They occasionally don’t even make sense—I once saw a random door surrounded by walls with a small stack of bills, totally inaccessible. It’s a bit annoying not being able to reach everything and causes a bit of frustration.

My biggest problem with The Swindle was the unresponsive controls—there were way too many deaths that resulted from the goddamned jump button not actually translating to a jump onscreen. Occasionally, my thief would just keep going a certain direction despite the fact that I wasn’t actually pressing the button. The lag also gets seriously headache-inducing in the later levels where there are so many baddies in one spot. I died simply because I didn’t know I had overshot a jump or took one step too many—I’m pretty sure the neighbors across the street heard my obscenities.

The graphics aren’t top-notch, but they fit the aesthetic of a gritty-feeling London. The steampunk theme really works well, as it’s all well designed to give it an authentic look. The tools and abilities you can acquire are satisfying, but it’s not enough to counteract the frustrating lack of response from the controls or the one-off level that almost forces you to lose a day in such a tight schedule. The Swindle would be an awesome game if it had been executed correctly.