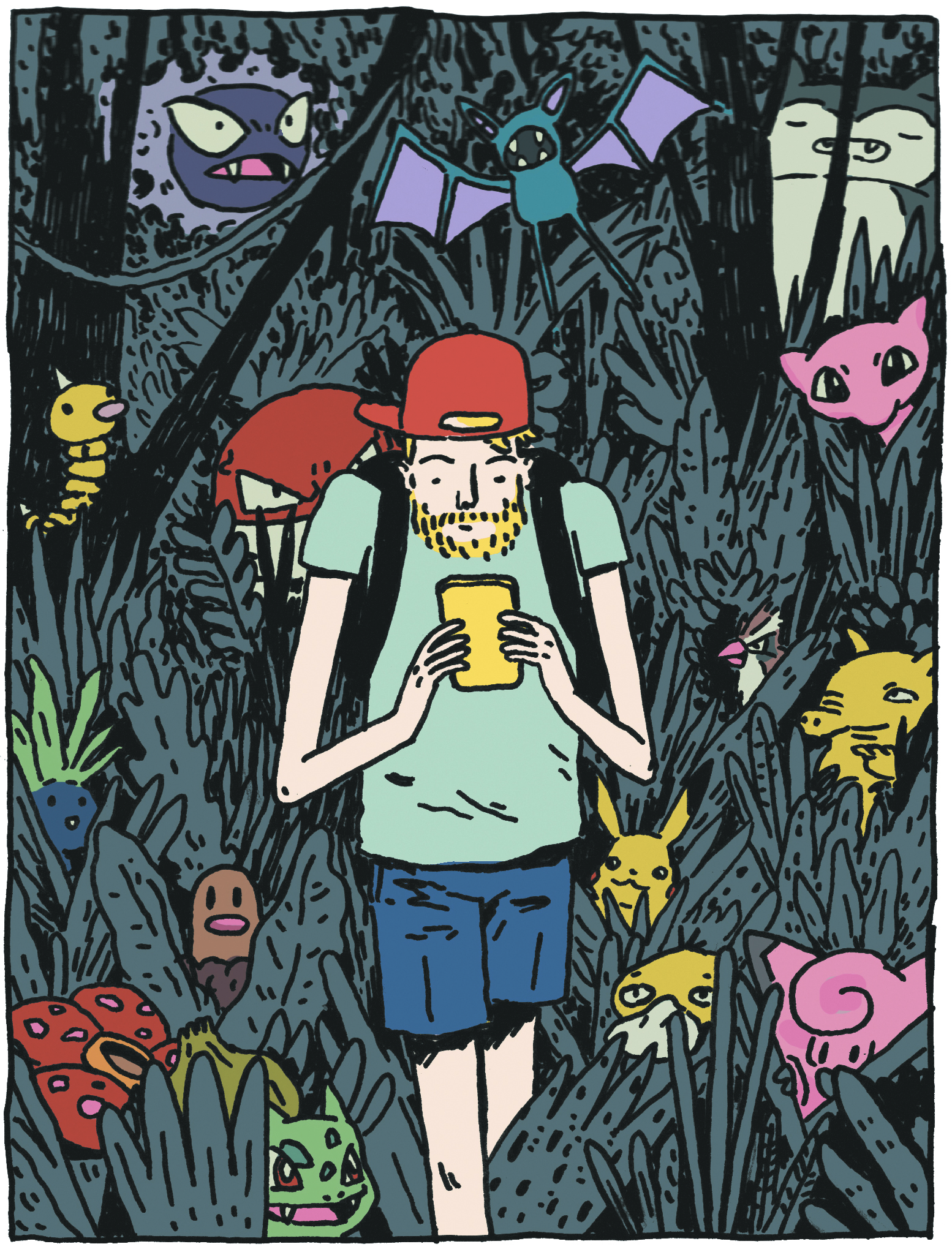 There are four things in life that I refuse to start doing. Not because I’m morally opposed—my morals are quite questionable and flexible. But no, I’m afraid of four activities based solely off of the fact that I might not ever stop doing them if I start, and I already have enough bad habits. These four things are as follows: cocaine, playing poker, playing World of Warcraft and joining a fantasy basketball league. But after I downloaded Pokémon GO to my cellular-tellular, it soon became obvious that there should have been five things on my personal list of forbidden fruit.

I missed out on the Pokémon fad when I was a kid, so I knew nothing about the app when I installed it. For all I knew, Pokémon was some popular sub-genre of Japanese tentacle porn. Like most shit I don’t know that much about, I looked up Pokémon on Wikipedia and learned that, like, 75 million people had already downloaded the app in its first week, as opposed to the 50 million people that have the Tinder app on their phones. This leads me to believe that we humans officially like playing Pokémon more than poking. But seriously, wouldn’t you rather catch a Pikachu than an STI?

Just as I was too old for the Pokémon craze when I was growing up, I was also too young for the crack epidemic that hit the country out of nowhere in the ’80s. But, I see a lot of similarities. Both kind of came out of nowhere: Sure, there was cocaine, but it wasn’t as addictive as sucking the glass dick. The same can be said for Pokémon. Much like a crackhead wanders an urban wasteland desperately searching for their next rock with blatant disregard for personal safety, a Pokémon player will behave in the same way—such as crossing the street without looking or asking a stranger where they can catch a rare Jigglypuff.

In fact, I think we need a nice new slang name for the hoards of nerds roaming Downtown at a Walking Dead–like zombie pace with their faces buried in their phones. I suggest Pokéheads, similar to cokeheads. Both can be super annoying in public, but at least a Pokéhead won’t talk your ear off and drink all your beer. Either way, the biggest similarity may be that crack cocaine and Pokémon are both pretty fun activities.

About a week after Pokémon GO hit the streets, it seemed like every other post on my Facebook feed was about the new phenomenon. People seemed to be either very pro-Pokémon or hating on it to no end, complaining about the new trend like it was worse than a Donald Trump–AIDS-infused missile aimed at a Bernie Sanders rally, if such a thing exists.

But let’s face it, folks: Pretty much all of us are buried Poké Balls deep inside our phones for a majority of the day anyway, so why hate on some nerds who are finally getting off the couch, unglued from their Xboxes and burning some calories? Let us have our fun. And if you do happen to hit a herd of Pokéheads illegally crossing the street with your car, by all means, don’t feel bad. This is our Great Uncle Darwin taking care of business. Just sit back and laugh as the lemmings march off the cliff and update that shit to your FB status ASAP so I know where a rare Machoke might be hiding.

Another fun thing about the whole Pokémon GO craze is the amount of conspiracies that it’s producing, like that cell phone companies created it just to jack up our data usage plans, or that the NSA developed that app to get more info about what our backyards look like. Or maybe the NSA developed it just to one-up the CIA for developing crack in the ’80s. (Whoa! Another similarity!) The NSA would be all, “Hey CIA! Bro! Check it out! We made something just as addictive as crack and it would like to ‘use your current location’!”

Even law enforcement has set Poké-lures to attract people with warrants who they have been looking for, but until the criminals became Pokéheads, they were able to evade the po-po, who are doing what they would do with Facebook: tracking down felons that were dumb enough to “check in” somewhere, only to have the cops waiting for them at an ICP concert or some shit.

We will have to see where this Pokémon craze takes us. Is it uniting people or tearing us apart? Who knows? Either way, I don’t care what people think of me for playing a childish game. I do all sorts of childish shit—my data-usage habits should be no different. And not caring about what people think is super punk rock, man. Besides, the shit’s fun, just like crack.