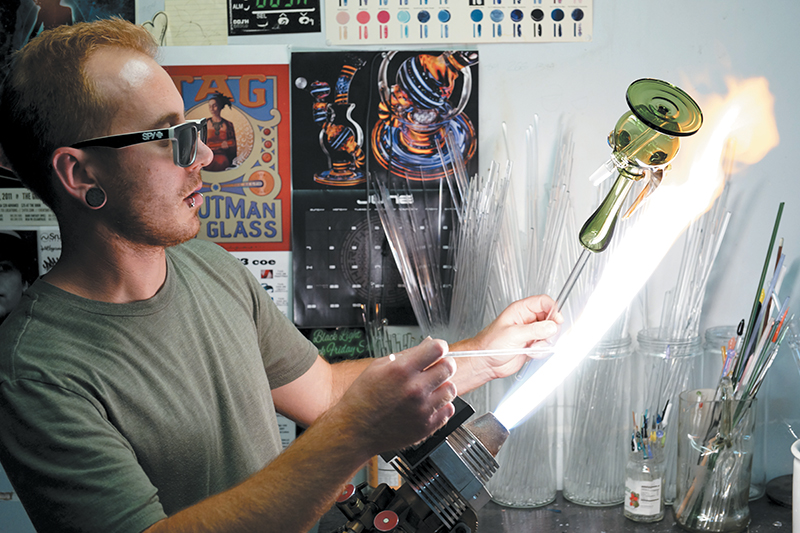 Mike Brown: The World of Glass Blowing with the Borosyndicate Crew

Deep in the heart of Murray, Utah, tucked away neatly and discreetly against the world-famous I-15 freeway, lies a special studio. Sure, there’s a retail store where they’re selling mostly glass-blown products intended for tobacco use only, and of course there is a claw machine there, which I am particularly fond of. But behind all the display cases made of glass—housing shitloads of glass—is a door to a back room mostly overlooked by all the customers.

And behind this door is the studio—the glass-blowing studio. This article is a small glimpse into the world that is Borosyndicate Productions, an artistic empire created by Kenny Holliday that Willy Wonka would be proud of. The shop does well these days with a national reputation for high-end glass products at reasonable prices. Borosyndicate, the retail store, needs little promotion—not because it doesn’t deserve it, but because, seriously, the store does so good that it doesn’t need it.

So, I didn’t want to know anymore about Borosyndicate the retail store—I wanted to know more about Borosyndicate Productions. I wanted to jump down the rabbit hole that is the glass-blowing world and get a glimpse into what makes a glass blower tick. In all honesty, that rabbit hole is deeper than I initially thought. I looked around and realized that glass is everywhere.

I sat down with Kenny and Evan Ballance, two of the premier glass blowers at Borosyndicate. I asked them how they got into glass blowing, and both of them seemingly stumbled into the hobby-turned-passion-turned-career the same way: by accident. Both had a mild curiosity with the trade, but little direction. Kenny got ahold of most of his glass-blowing equipment by himself and for the most part is self-taught.

The easiest comparison I could draw to Kenny and Borosyndicate and glass-blowing would be to the tattoo world. You could be interested in drilling skin and go ahead and order a tattoo gun and ink off of Amazon no sweat, but without landing a decent apprenticeship with a reputable tattoo artist, the chances of you honing your craft get pretty slim. There’s a chance you could teach yourself and be pretty good—hell, Prince taught himself how to play instruments—but not too likely.

The thing for Kenny and Evan was that there was no such thing as a glass-blowing apprenticeship when they got started. But like a shark and one of those fish that eats stuff off of them, Kenny and Evan would feed off of each other. In a way, the lack of apprenticeship helped make them more creative. Sometimes eliminating rules does that.

Still they both had people they could look up to and watch. Evan mentioned that he also learned a lot from watching retired glass blower Dave Caldwell. Kenny told me that the biggest sign that someone could be successful with glass blowing is that they just like to watch the fucking process. After enough watching, it could be time to learn.

Nowadays, with the power of the interweb and YouTube and such, it’s much easier to figure out how to blow some glass. It’s also a little easier to access kilns, materials and even classes than it used to be. There’s actually a kiln at the University of Utah that’s basically the same shit that Kenny and Evan use at Borosyndicate.

As far as what you would want to do with that shit, the possibilities are pretty endless. Kenny and Evan told me that most glass blowers tend to gravitate toward one specific trait or object and stick with that, so a lot of glass blowers end up just blowing one certain thing. Kenny knows a blower who just blows elephants (giggles). Evan knows a girl who only blows vaginas, and she’s really really good at it.

That being said, it’s not uncommon for glass blowers to collaborate with each other on projects. This makes sense if you primarily focus on creating one specific thing most of the time. For example, the guy that Kenny knows that only does glass elephants might need a glass vagina for one of his pieces. He could then call the girl who blows the vaginas and they could make one awesome elephant vagina.

Although Evan is skilled at a variety of glass creations, he told me his personal favorite things to create are pendants, goblets and marbles. There are literally a million different things you can create with glass, though. That shit is everywhere, if you think about it. But it’s still an expensive hobby or art or medium—whatever you’d care to call it—so it’s not a bad idea to create something you can sell.

That is basically the approach that Kenny has taken to the craft: creating functional pieces of art that people can purchase and then using those resources to hone the artistic side of the process. Either way, you should check out Borosyndicate if you haven’t already. Just don’t break anything when you are in the store.