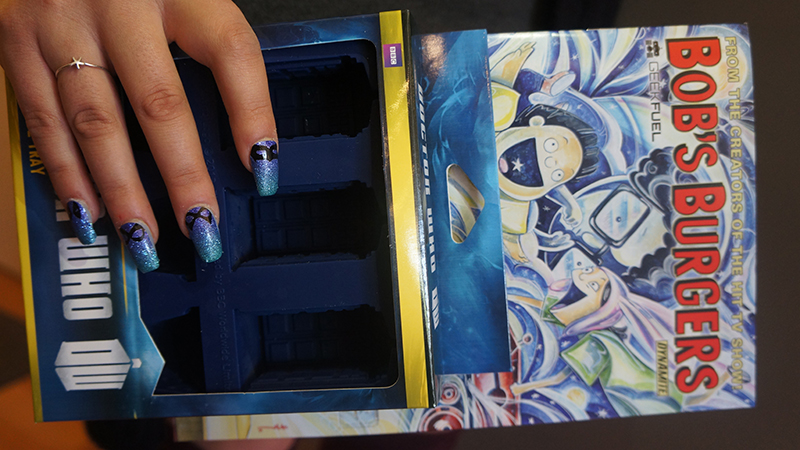 Geek Fuel made a stop in SLC recently at the latest Salt Lake Comic Con, just in time for my September box to come in the mail. I’ve enjoyed what these boxes have had to offer so far, always with something that makes me smile as a geek of some kind. So let’s unbox this baby and see what goodies are inside.

Doesn’t matter what kind of Whovian you are, everyone enjoys a chilled beverage. So the minds at Think Geek put together this rubber ice cube tray featuring one side of TARDIS shapes and the other side of Dalek tanks, made to float around in whatever you’d prefer to drink. Sadly, the Think Geek people need to go back to the drawing board on this one. When water freezes into ice, it expands,which is why ice cubes are sometimes found joined together. This tray is all rubber, so when the water expands, it pushes out the sides, leaving misshaped designs that bulge. It works far better with jell-o or gummy treats.

In support of the new movie The Martian, in which Matt Damon is abandoned on Mars to go insane as he grows potatoes and insults Neil Armstrong, these buttons have been issued out as you support his mission. Cleverly created to look like real NASA mission logos, it features the names of all those who went on the mission. Well made buttons, and a geeky reference only the space-knowledgable will be able to get.

The downloadable Steam game this month is Roche Fusion, a cool little arcade style shooter, done in the classic top-down style where you scroll upward as the enemies come down to terrorize you. The game is super quick at times, leaving even the most furious of button mashers sweating, and possibly wishing for a old-school joystick covered in pizza grease so you can feel like you get an extra bit of maneuverability. No complaints about this game, it was an awesome surprise that left me wanting to beat it.

One of the few times I’ve never been able to review an item myself, primarily due to the fact I never use said item, Nailed It threw in some awesome geeky nail wraps, and as a guy who has never wrapped his nails, this was a mystery to me. So I asked one of our awesome interns, Julia, to try them on. Immediately the text was pointed out to me as reading very sexist with a flowchart titled “Are You A Girl?” across the back. The nails themselves look alright with the masks and symbols, but don’t count on them lasting 2 weeks, you’ll be lucky to get 1 week out of them. One of the cooler gifts in the package was the Erica Scarecrow poster. This awesome rendition of Kylo Ren from the new Star Wars film exemplifies her style, while also capturing the spirit of a character we have yet to be exposed to. Mysterious, badass, evil—everything you could have wanted out of a possible Sithlord. At least we think they’re a Sithlord. They got their own knights and everything though… right? Dammit, A.J., just tell us something!

By far the IT item in my box this month was this Boba Fett t-shirt. The standard helmet with a grey on grey look is fine, but the killer element is the Ziggy lightning bolt down the face. A reference that only a select few will truly understand at first glance, and others will just be left confused by as to why its there int he first place, But you know what? Doesn’t matter. Its Bowie meets Bounty, which is cool in itself.

The bonus item this month comes from Dynamite Comics, who gave Geek Fuel an exclusive cover version of their latest issue. The comic itself has the humor of the show, but the art style doesn’t complete match up, like you would expect from other cartoon shows that have their own comic. Read for the humor and ignore that the art is slightly off.

This month’s Geek Fuel box was kind of a mixed bag. The button, the nails, the button and the comic didn’t really do much for me. However, the poster, the game, the ice cube trays and the t-shirt were very awesome. But I guess that’s how every box will turn out for a lot of people, as some stuff you’ll be jazzed on and others not so much. I am really looking forward to next month’s box.