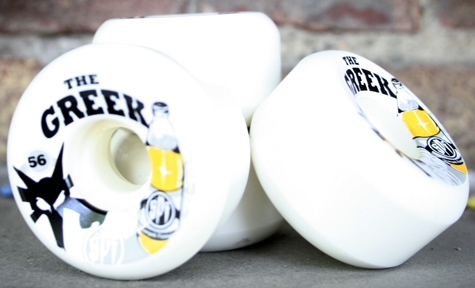 S.P.F. stands for Skate Park Formula (for those of you who don’t know) and Bones pretty much make the best wheels on the market––they truly never flat spot. These wheels are a little large for my taste and a little softer than I usually roll, but free wheels are free wheels. These wheels also have a different shape to them than all of the other Bones models. They are straight cut to prevent coning, though I have never seen any of their other wheels lose shape. For those of you don’t know who “The Greek” is, you’d better recognize. Jimmy Marcus is his real name and he has been a staple in the San Diego concrete scene pretty much forever. Bones gets mad street cred for giving this guy a model––it is definitely well deserved. Jimmy also rides for The Label and holds it down in any park tranny contest with the best of them. He also rides padless, I might add.  I don’t know if you’ll find these wheels in any of the local shops, so you might have to get them online. –David Amador

Ever want a bottle opener but don’t carry around keys for a keychain––or anything, for that matter––that would necessitate having a bottle opener? Well, lighters work, but after a while it seems easier to just ask around for one. No longer must anyone suffer through attempting to open their drink to no avail thanks to the guys over at Reef. The Leather Fanning is a super stylish sandal that allows you to walk around in bliss, and when you are thirsty for that bottled fermented deliciousness, all you’ve gotta do is look to your trusty bottle openers, located on the sole of each foot. Pretty cool stuff, although I will say a lot of the people I have talked to feel a little weird about opening up a refreshing brew with your dirty shoe. Fuck it, you only live once right? This sandal makes for worry-free opening beer as well as a stealthy location so the “elders” of society don’t make concerned faces when you are banging your bottle of beer on random objects around the campfire. Good show. –Adam Dorobiala

“Freedom from Hangovers,” or, what I like to call: “Shit that makes your puke black.” There’s a fine line between drunk and blotto—the latter includes vomiting. And most of the time, especially when your bar tab is over $30 in beer, you won’t know where that line is, but you will go to blotto-land. I can tell you this: there are far better remedies for hangovers than Chaser PLUS, but maybe none as accessible––you can buy it at some gas stations, even Walgreens. I awoke six hours after “The Bout at Burt’s” with a sloshy headache, uncommon for me (I rarely drink to excess—there are greener ways to get your rocks off) and some achiness. Drinking a glass of water and taking P.K.’s probably spared me the worst of it. The best “hangover cure” for me was the six more hours of sleep after the first. That, dear reader, was free. –JP

Thanks to SLUG, I am now the proud owner of a beer bong with a giant penis on the end. Practical? Absolutely not. Embarrassing? Somewhat … the thing lives in the closet with the dog food—it’s not really the sort of décor you want hanging out in the living room. It is a great way to get a handful of straight dudes cracking jokes about sucking cock though. The boys were far more excited to hit this sucker then any of my female friends have been. Unfortunately, this giant dong doesn’t work so well as a beer bong. The hose is really short––it’s difficult to even get an entire beer down the thing. The best part about this dong bong is the foam factor. A giant penis “getting you” (typically in the face) with the white stuff is enough to make anyone laugh. It’s also sure to cause lots of “that’s what she said” jokes. –Jeanette Moses

What a piece of shit this game is, earning a whopping 2.5 stars in the iTunes store, even though it is the only game licensed by bpong.com (the official governing body of the sport, apparently). This game would have been so much more fun if they weren’t trying so hard. They should have gone with a simpler interface instead of trying to create a 3D replica of a bar and beer pong table. It should have been set in a frat house with passed out girls being touched and with SNES quality graphics. The biggest thing, though, is who the fuck wants to play beer pong without the beer? I certainly don’t want to play by myself with all of the obnoxious rules and noises but none of the intoxication.  If you are douchebag that only buys things for novelty, purchase this, but know that novelty is all that you will get. –Cody Hudson

Let’s face it: if there ever is a superior cheap, delicious beer to guzzle while you skate, it will most often be Pabst. They have tons of rad merch, but my personal favorite is the Painter Cap because it’s made out of that super light cloth so your head doesn’t get all hot while you are skating around. The only downfall is if you have longer hair, like me, and tuck the hair into it so you don’t look completely homeless, the cloth can rip. I wanted to run a photo of the hat, but it seems to have been lost between stops at certain parties––where we just so happened to be drinking Pabst. I guess I could always go online (and you should, too) to the Pabst store and purchase the trucker cap (seeing that the painter cap has been discontinued). While you are there you could also get a bocce ball set, jacket, or Zippo for those times when brandishing the name of the beer you are consuming on all your clothes and accessories is the only high class thing to do. Just be careful, everyone else will be so stoked on your kit, they might try to steal it off you. –Adam Dorobiala

If your super soaker filled with tequila is starting to get a little boring and a little bulky, you ought to look into smaller weaponry such as the Beer Blaster. The Beer Blaster and Blasterette are essentially beer-pistols that allow you to shoot beer out of  their nozzles using the carbonation from canned beer.  All you need to do is take your cheap beer of choice (cheap because the majority of it won’t make it in anyone’s mouth), shake the shit out of it, load it into the gun, and in no time you’ll be giving your friends the PBR facials they have been craving all night. While this guy is not replacing your super soaker, it will definitely make its way into any alchy’s party arsenal. –Tyler Makmell