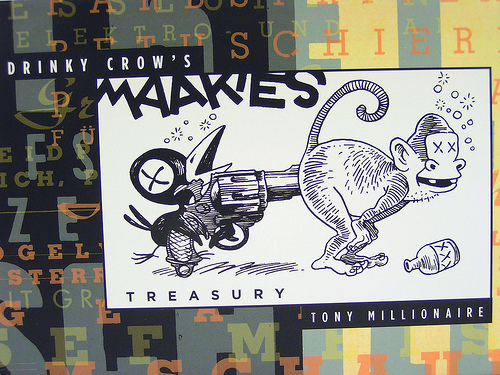 Tony Millionaire
Fantagraphics Books
Street: 03.15
If you’re unfamiliar with Drinky Crow or Tony Millionaire’s Maakies comic strip, here’s the skinny: an alcoholic crow (Drinky Crow) and an alcoholic monkey (Uncle Gabby) live, and presumably work on a giant boat where they are prone to being alcoholics, killing themselves and killing each other. I guess you could look at the Maakies comics and Crow and Gabby’s alcoholic misadventures as Tony Millionaire’s commentary on a society bent on self-destruction by any means necessary. Or as a reflection of Millionaire’s own struggle to cope in a world that is far too often overwhelming. Or you could, you know, read it like a fucking comic strip. Like all comic strips from Peanuts to Nothing Nice to Say, Maakies is hit or miss in the gag department, but since it is generally more depraved than most, excellently illustrated, and just plain fucked up most of the time. Even the bad strips are pretty entertaining. Plus, nearly every strip features a smaller, non-related comic beneath it. So really, you’re getting two comics for the price of one. This book is probably slightly too sophisticated and intricate to be enjoyed in the midst of a drunken stupor, but seeing Crow blow his own brains out and Gabby being decapitated by a doppelganger will surely help take the edge off of any hangover. –Ricky Vigil

The Gourmet’s Guide to Cooking with Beer
Alison Boteler
Quarry Books
Street: 01.01
There comes a time in a person’s life when one has to look deeper into the consumption of beer, it can’t be all about downing a case of Natty Light any more. In the past, I’ve only marinated with beer because I was given too much Wasatch Irish Stout, and I was pretty excited to dive into this cookbook. It comes complete with easy to use charts explaining what kinds of beer to use with different meats, vegetables, or pastries and also which brands to use. Alison Boteler tackles every aspect of cooking, from appetizers to desserts, and brunches to breads. I decided to give the Macaroni and Beer Cheese with Bacon a try since I had all the ingredients in the pantry. I learned that cream ales go well with cheese, but went a little off the deep end and used a Samuel Adams Cream Stout. The sauce was simple, flour, salt, pepper, beer, minced onion, sharp cheddar cheese and half & half. Had I spent the time to drive up to Evanston and pick up some Little Kings I think the sauce would have taken on a much nicer color, instead it looked a little like slightly burnt fry sauce. I placed some oversized elbow macaroni and a healthy portion of crumbled up thick-sliced bacon in a casserole dish and poured in the cheese sauce, mixed it up and topped with some more cheese before placing it in the oven. At this point I was a bit skeptical. The dish didn’t look that great and the heavy smell of the cream stout was drowning out any bacon aroma. After a short bake I removed the dish and was surprised at how savory it had become. The macaroni absorbed much of the creamy stout flavor. So delicious! The bacon added delightful crunches to each bite and the color of the sauce had deepened into a beautiful autumn dark orange. It was better than any quick mac & cheese I’d ever made, and even better than sides I’ve paid good money for at a restaurant. The beer really did make this a tasty meal. Any avid cooking fan with a sweet tooth for beer will enjoy these recipes. I’m excited to tackle some of the more complex dishes since this simple side came out so well. –Cinnamon Brown

You Must Be This Happy To Enter
Elizabeth Crane
Punk Planet/Akashic
Street: 02.01.2008
Writing is not fun. Those of you under the delusion that crafting a story is a “good time”, please note that the few commonalities between wordsmiths are self-doubt, debt and stress-induced diarrhea. Elizabeth Crane, however, stands out. Her bizarre vignettes about zombies in rehab, psychic foreheads and babies that become Ethan Hawke overnight are not only hilarious, but this reader suspects that Crane herself had fun writing them. The stories in You Must Be This Happy To Enter are deft, abrupt, sweetly sentimental and straight-out wacky, like a homemade valentine from the Twilight Zone. Crane is no Tolstoy. Nothing is going on in her work that critics and professors would cite as “important.” However, she’s not beach reading either. Crane occupies that oft-neglected space in literature––the writer capable of expanding the mind and the heart while jumping on a trampoline or flying on the trapeze. Come discuss You Must Be This Happy To Enter at the Hardboiled Book Club at Sam Weller’s on June 30TH at 7 PM. –JR Boyce 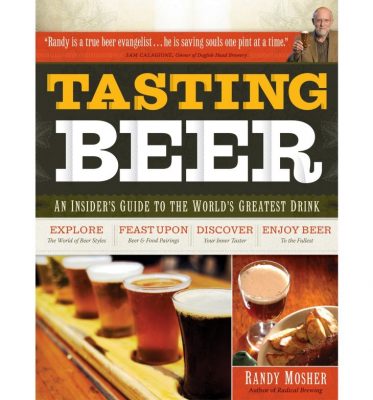 Tasting Beer: An Insiders Guide to the World’s Greatest Drink
Randy Mosher
Storey Books
Street: 02.11
Maybe it is just my inner beer snob talking, but when I go to a restaurant I am much more likely to order a specialty beer if the waiter actually knows what they are talking about. You rarely order a glass of wine if the server asks, “what would you like, red or white?”, and beer should be the same. Randy Mosher’s newest book Tasting Beer gives the reader enough information to understand the origin of particular styles of beer, how to serve beer properly and even how to drink it. In my snobbish opinion, I think that this ought to be a regulatory read for anyone serving booze in the craft beer industry. So sit down with a cold one and enjoy this killer read. Cheers. –Tyler Makmell