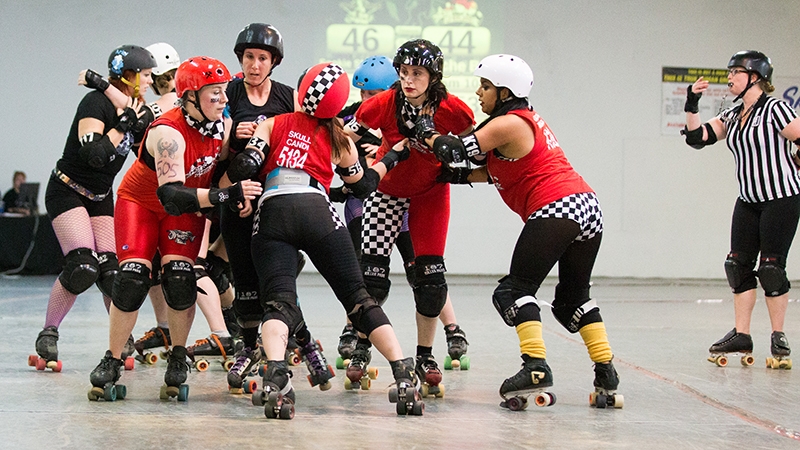 Parking in the slowly expanding pond that was the lot outside the Derby Depot proved a little challenging. Luckily, once upon a time I was a Girl Scout, and Girl Scouts are always prepared—I brought a change of shoes once I got off of work from my other job. So, armed with some boots, a blanket and, in hindsight, a very poor jacket, I waded over to the doors of the Derby Depot as fast as I could without becoming drenched. It took a bit for the warehouse to get decently filled—I believe the weather kept some people away, and understandably so, as it was coming down crazy hard in some areas.

The continuing rivalry between the Hot Wheelers and Black Diamond Divas is on its way to becoming legendary. As the warm-ups began, it was clear that these ladies were all business and were of a mind to kick some ass. As I watched the teams practice breaking through the pack, taking turns as jammers and stretching, it was safe to say that this match was going to be interesting.

The first jam began like cannon fire, with Hot Wheeler jammer Makillda firing herself off the line and out of the pack hard, scoring lead jammer position. Trying to hit the pack fast and hard to pick up the distance, Divas jammer Sookie Slaphouse received a back block, sending her to the penalty box and causing the first jam of the bout to be a power jam. Although once Sookie served her time within the box and came back on the track, Makillda was called on her own cut track penalty, ending the jam at Divas 15 to Hot Wheelers 14.

Both teams were showing absolutely phenomenal defensive skills, although sometimes forgoing the offensive tactics, blockers would all form up against the opposing jammer using all their might to prevent the jammer from getting through the pack and scoring points. When they weren’t ganging up on the opposition, the pack was either skating around the track at crazy speeds or all packed together, making it next to impossible to understand the crazy action.

With roughly eight minutes left in the first half, skater TNT of the Divas went down hard in the straightaway. While roller derby is an amazing, difficult and kick-ass sport, it’s not all sexy fishnets, cool makeup and free beers. People do get hurt, even with the many precautions set up to prevent injury. EMTs are always on standby, volunteering their time to be there in the worst-case scenario of a skater injury. With help from the EMTs and the members of her team, TNT was escorted off track to care for her injuries. Within minutes, the first half ended with Black Diamond Divas still maintaining a lead at 125 to the Hot Wheelers’ 80.

CAWS, otherwise known as Community Animal Welfare Society, is a volunteer-run non-profit animal rescue organization here in Utah. They brought a few adoptable pups to the game and told the audience a little about themselves and the adoptable animals they’ve rescued. Some of the dogs they brought included the prettiest little pit bull mix in a very slimming white dress (yes, the dogs were literally dressed up) and the cutest goddamn little ladybug Chihuahua I may have ever seen in all my years.

In the second half, it seemed that the metaphorical gloves (or I suppose it would be wrist guards in this case?) were off. Skaters didn’t hold back, using all parts of their bodies legally, and sometimes illegally—hello back blocks and forearm calls—to knock their opponents out of play. A great point in both of the teams’ favor, however, was that they seemed to not forget to keep their defensive tactics up. If the struggle proved a little too much, they executed a few successful star passes to their pivot skaters.

The Hot Wheelers, though they skated hard and beautifully, trailed behind the Divas points-wise during the entirety of the game. With a few official reviews sprinkled within the bout—just to keep things interesting and have everything accounted for—the Divas, in their black-jersey-clad glory, were the conquering champions of the night. At a score of 254–202, their victory lap was well deserved. To see the rest of the season schedule and see both of these teams in action again, check out Wasatch Roller Derby on their Facebook or their website.

For more photos from this bout, visit Void Pointer’s gallery on Facebook!