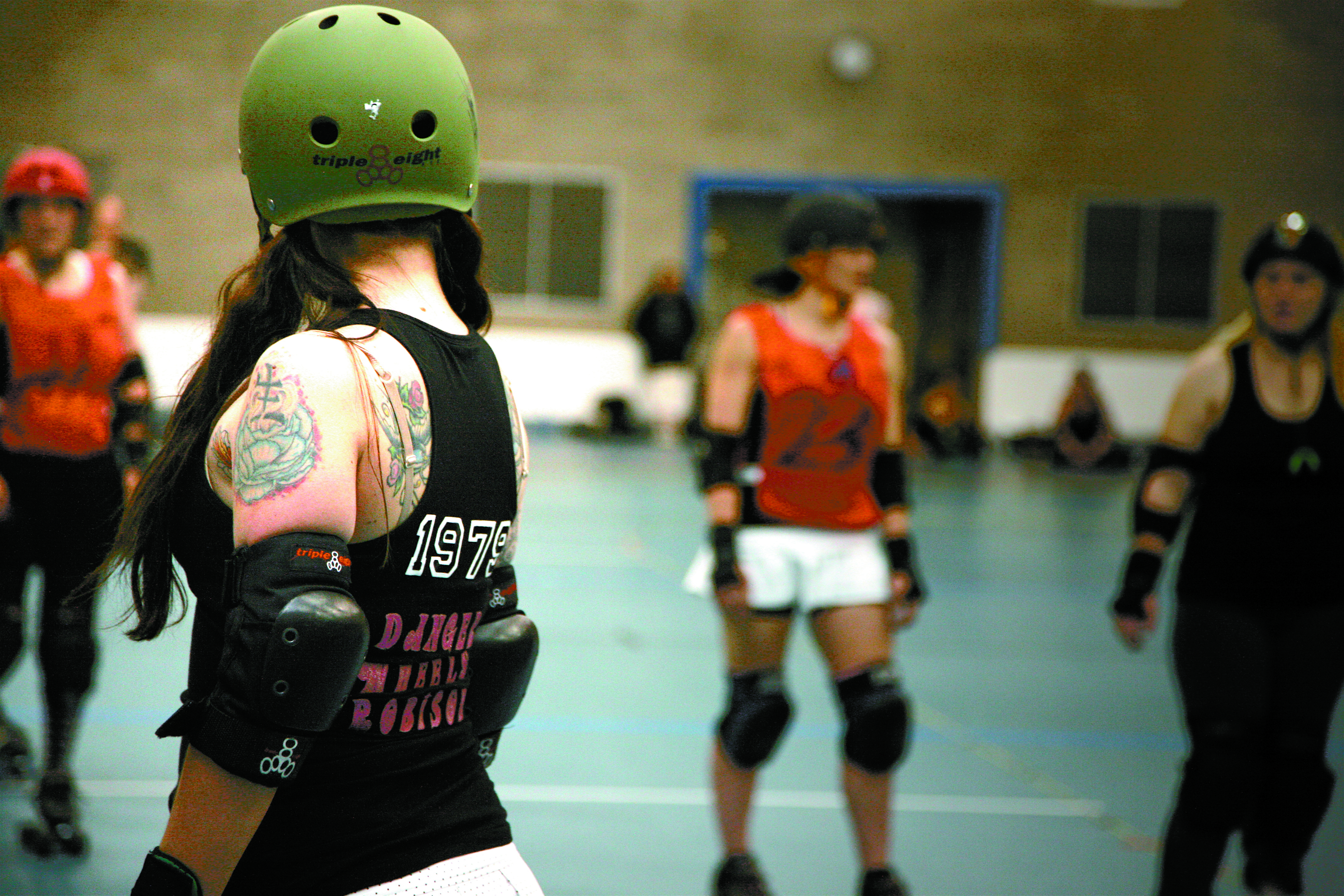 Along the Wasatch Front, Women’s flat track roller derby is beginning to coalesce into a sizably enthusiastic culture of punk and metal loving babes who find an outlet in taking names and kicking ass. 2007 marks a new era for the emergence of women’s roller derby leagues in Utah; a new season for the expanding Salt City Derby Girls and the first official season for the Davis Derby Dames. The sexy re-creation of the sport involves the edginess of skate culture with the stylishness of burlesque, while substituting the rigged WWF antics of its most recent permutation with genuine rules and ankle blowing take downs. The latter-day derby is an all-women’s affair akin to a tattooed and whisky’d up sewing circle sans needle and thread.

Utah’s all women roller derby began in Salt Lake only two years ago when a derby girl from Kansas City named the ‘Iron Rack’, emphatically sprung the idea of a Salt Lake derby club on a friend. Shortly thereafter, that friend (renamed ‘BrewHaHa’) and ‘Iron Rack’ began sparking the idea on every girl they could find. In early 2005, the two had some luck roping in ten ladies to meet once a week. “None of us really knew how to skate, we would meet at a rink and Iron Rack would just teach us all how to balance on quads,” BrewHaHa said, “I never thought it was going to get huge. I thought, we’ll try and dig up a group of 40 chicks to beat each other up on the weekend then go and get drunk.” Shortly thereafter, Brew happened across the indomitable Smother of Pearl who was independently proselytizing recruits at the roller skating rink, Classic Skating. The groups joined ranks and Utah’s first all women’s roller derby league, the Salt City Derby Girls, was born.

In just a few years the allure of derby has brought plenty of new recruits; some stay, some leave in a hurry, but the core elements remain intact. “Its, hard to convince girls that this is a sport… when they first try out they always tell me, ‘God, I had no idea what I was getting into, I had no idea how this was going to change my life.’” Brew said. The Salt Lake League is currently oscillating between 50-60 players.

Vega Deth, a former member of the Salt Lake league from Ogden suffered an injury during the first season and fell out of play. Undaunted and sick of the drive to SLC, she set out to spearhead a league in Davis County the menacing new Davis Derby Dames. “We knew there would be plenty of girls who would be drawn to the idea,” Vega said. Miss Take broke in: “ Derby is a place for women to be themselves without having others judge them. Most of the derby girls are women who didn’t get to be involved in team sports,” this idea was repeated by girls in both leagues. Within months the league in Ogden formed their own LLC, recruited 20-30 new players and recently hosted their first official ‘bout’ at the Golden Spike Fairgrounds. When asked how seriously the girls took the sport Vega Deth, coolly replied; “I think [about] derby every second.”

Although a Davis vs. Salt City bout is not currently scheduled its only a matter of time before they compete against each other, particularly since both leagues are scheduled to send their best players to compete out-of-state.

Roller Derby has become a punk-rock sorority with a blood oath. Battle Bunny, the charming and gregarious firecracker who skates for SLC agrees, “ When you become a derby girl you instantly have an entire league of friends to party with—it’s a sisterhood. Derby is like a second full time job that becomes too addicting to let go of.” Check out both team’s websites to stay on top of the bouts they’ll be playing this season. And keep your fingers crossed for the bout between the ladies of the beehive state. It’s sure to be one hell of a match.