00:00 / 16:39
Spotify Stitcher
RSS Feed
Share
Link
Embed
With 15 minutes left, Black Frost was still in command of the scoreboard. Black Frost’s blockers did a fantastic job, containing Candy Pain jammer Duchess of Destruction, nearly knocking her into the crowd. Lucky Vixen, a Black Frost jammer, was able to score 10 points as her blockers were doing double duty, aiding her through the pack and restraining Duchess. This jam was very action filled, and it continued on as Duchess was hit out of play. She came back in, cutting the track, only to be knocked down again straight onto her ass. 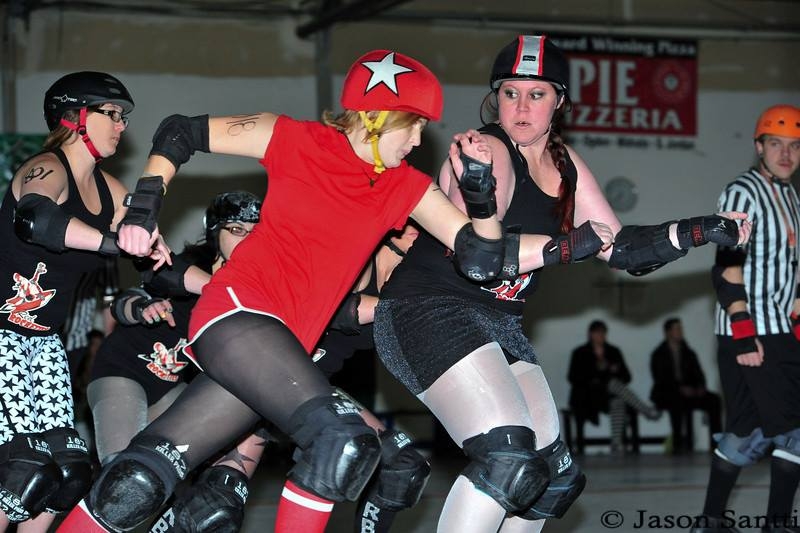 As some of you may know, The Derby Depot is, in fact, a warehouse—and therefore made of concrete floors and concrete walls—making it quite difficult to heat. So I schlepped my head cold–ridden tuckus into the freezing den to watch some season-ending holiday derby. The Red Rockettes had their fall session bout, which surprisingly fell on a weekday, and more surprising was the turnout. The Derby Depot was pretty packed for a Thursday night game, or maybe it just seemed fuller because the crowd’s large parkas and coats took up more space than usual.

The two teams to be pitted against each other were in fact from the same original team. The Red Rockettes split themselves into Red vs. Black, but with fun seasonal titles: Black Frost and Candy Pains. As the first bout of the night started, Black Frost jammer Spider Sam snagged lead jammer title, leaving Candy Pains jammer, Mantis, struggling to break through the pack for her scoring run. Spider snagged the first five points of the game, and definitely wasn’t the last that her team would see for the rest of the bout—especially with her teammate Styx scoring a fantastic 20 points right after, breaking through the pack with what seemed like ridiculous ease.

A few jams in, Candy Pains finally got some points on the scoreboard, but not without difficulty as Duchess of Destruction kept getting knocked out of play, finally had enough and called off the bout after scoring her four points.

With about 10 minutes left, the Candy Pains came extremely close to bridging the gap between the scores, as Mantis not only became lead jammer, but also lucked into a power jam situation, as Black Frost jammer Grateful Dread was sent to the penalty box for back-skating. Mantis sailed through the pack again and again, eventually scoring 35 points for her team, making the score 72 Black Frost to Candy Pains 54. Now an 18-point lead might seem like a pretty significant gap, but in a derby game, that can change in just a single jam. With the first half closing in, Black Frost were putting up some spectacular defense as well as pushing their offensive forward, ending at a score of 98–66.

Halftime was a little scrimmage of the freshies—otherwise known as the fresh meat—who had passed their skating trials and were considered trained enough to play in an actual bout. With how long I’ve been watching derby (and wishing I was playing), I can tell who’s a veteran skater and who is newer. I know that there are many people out there who know tons more about derby than I do, believe me—I learn a little something new every game I attend. It’s no judgment—I know every skater starts out that way, and quite honestly, I love seeing the improvement of a skater either on or off season. So this is a big thumbs up and rock on from me, you kick-ass freshies! Keep skating and keep kicking ass on the track!

The second half started underway with a slight anticlimactic first jam. Black Frost’s jammer was having issues getting out of the pack, fighting with both Candy Pains blockers and tangling with their jammer, Duchess of Destruction, only scoring a measly two points. A little further into the second half, the teams started showing a lot more action, however. Great blocks and hip checks abounded, along with a fair share of penalties. With 15 minutes left, Black Frost was still in command of the scoreboard. Black Frost’s blockers did a fantastic job, containing Candy Pain jammer Duchess of Destruction, nearly knocking her into the crowd. Lucky Vixen, a Black Frost jammer, was able to score 10 points as her blockers were doing double duty, aiding her through the pack and restraining Duchess. This jam was very action filled, and it continued on as Duchess was hit out of play. She came back in, cutting the track, only to be knocked down again straight onto her ass. It looked seriously painful, and she’ll definitely feel that for a few days.

The second half definitely showed these girls’ moxie. There was some lost equipment, including toe stops and even an entire skate. Penalties, great power jams, and that great camaraderie that comes from a mutual love (or obsession, depending on how you look at it) of roller derby. Candy Pains put in a fantastic game, especially in the very last jam, with Clover Crush in a power jam situation bringing in an impressive 28 points. They nearly caught up to the Black Frost’s score, but not quite. The bout ended with Black Frost triumphant, scoring 174–161.

To keep up with these ladies as they enter the off-season and to know when the 2014 season starts, find them on Facebook or on their league website at wasatchrollerderby.com