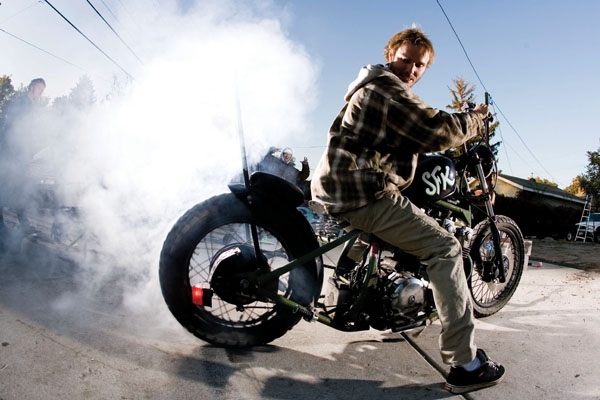 Chances are if you’ve been snowboarding or skating in the past 10 years or more, you’ve heard about SFK. Stupid Fucking Kids is group of individuals that are amazingly talented at whatever they put their minds to. I know the crew from shooting snowboarding and skating photos of them for the past five years. It’s really the first group of guys that gave me a chance to go out and shoot photos. Throughout the past couple years, the crew has gone in different directions. Whether this be Dave Doman being the creative force behind Celtek gloves or Chris Grenier staying focused with snowboarding and holding down the first part in “Get Real” (The Transworld snowboarding movie), one thing remains true: They will always shred and kill it in their own unique ways. Simon Larson has recently been putting a lot of his creative energy into building custom motorcycles. From this passion was created the “Man Zone,” a garage in the back of their house where you can find anywhere from one to 15 people skating and working on bikes. I sat down with some of SFK to check out the new bikes.

SLUG: When did you start working on bikes?
Larson: When I was a little kid.

SLUG: You worked on bicycles or motorcycles?
Larson: No, I actually started out on small engines, making little go-karts and shit. Then, my dad bought me a YZ 125, which is a dirt bike. The bike would always be falling apart, so I ended up taking things apart. I never had anyone to ask about how to fix it, so the bike would sit for a while until I just figured it out.

SLUG: When did you start working on more custom-type bikes?
Larson: A couple years ago.
Tonino: When you sold your three fixed gears and had enough money? (Laughing)
Doman: When did we start working on Green Horn? That would be the day.
Larson: Probably about two years.
Doman: Remember, we built that frame, then we were like, “Fuck it, let’s cut Green Horn.”

SLUG: What does cutting mean?
Doman: You take the bike, cut it in half and do what you want to it.
Larson: It’s manipulating the frame. Cutting shit off the frame, bending pipes and putting it back together how you want.

SLUG: How do you guys actually cut the frame?
Larson: Tools… Ha. Just kidding. We have two different pipe benders and we make a lot of jigs.
SLUG: What’s a jig?
Tonino: It’s dance from South Carolina.
Larson: Ha. Yeah, a jig’s a dance. No, you weld pieces of metal onto a metal table and you bend the pipe around the shape you made from your welded fixtures.

SLUG: How long did it take you to make Green Horn?
Larson: That’s a hard question. It’s been re-cut twice. The first time was when we were rookies and we thought it was sick. Then the second time we really did it right. We chopped the frame in half and did a bunch of work on it.
Doman: We were building the garage at the same time, too.
SLUG: Is that how the “Man Zone” came about, from you building bikes?
Larson: Yeah, for sure, just building bikes and the garage.

SLUG: How many bikes have you done now?
Larson: Probably about 12 or 13.

SLUG: Just in the past couple years?
Larson: Yeah.

SLUG: Were these bikes that you sold?
Larson: No, the whole thing at first was to get all the homies taken care of. That way, we have more bikes out on the road.
Doman: We would have more people to ride with.
Larson: Having more people to ride with is huge, so more people see the bikes and someone might ask where we got the bike and we can tell them that we make the bikes ourselves out of the garage. It’s mobile advertising. So we got those done and now we’ve done a couple. We haven’t done full bikes, just people coming over asking to get their bikes hard tailed.
Doman: Yeah, people come to us ‘cause they have bikes.
Larson: Then we just steez out their shit, make it sick.

SLUG: And all this work people can see is done out of this garage, the Man Zone?
Larson: Yeah.

SLUG: Do you guys do custom paint jobs?
Larson: Yeah, we have a paint booth in the garage. All the tanks are custom-painted. We use House of Color paints. It’s the dopest, most expensive, rad shit you can get. I’ve been airbrushing for years, since high school, but I never really applied it to motorcycles. I was just always scared, then I just did it and it was easy.

SLUG: So basically the bikes are custom everything?
Larson: Yeah, it’s a fucking sculpture with paintings on it. It’s a ton of art forms in one. There’s rad fine art done to it, then your gnarly manly art.

SLUG: So what’s a typical day like for you?
Larson: I go to school every day except Saturday and Sunday, leave early…
Tonino: You went on Saturday
Larson: That’s right. We went on Saturday to use the plasma cutter. We go up there and use their equipment. They got a ton of dope shit up there, like mills, lathes and plasma cutters. All the real expensive shit that’s like 10 grand for a machine we just go up there and use.

SLUG: How have you gotten all the equipment that you have here?
Larson: That’s why it’s so hard to say how long it took to make Green Horn and how much money it cost, because we had to buy something to make it happen. Our next-door neighbor, Steve (big ups to Steve), used our shitty welder, came back and was like, “This welder’s garbage, use this one,” and gave us his welder. Once we learned how to MIG weld good, Steve gave us a brand new TIG welder and a portable band saw. Just fucking everything.
Doman:  He shares much knowledge, too. He comes and hangs out for the enjoyment.
Larson: Steve gave us the confidence, really. He knows everything about everything. He would tell us, “That weld is gonna hold, calm down.” We would always wonder if the weld was gonna hold or if it would fall apart, then we tested it and it held. I hit a pothole hauling ass and the back wheel felt like it was four feet higher. My handlebars were big apes and they were ripped down to my chest. I got off, looked at the frame and it was solid. I just thought, “Yeah, our shit’s legit.”
Doman: What about that cop in Montana?
Larson: We were riding our bikes in Montana and Dave’s broke down. A cop rolled up behind us and was just super rad. He said, “Oh, I used to work in a machine shop. Who’s drawing your beads? These are fucking amazing.” That was just another boost of confidence.

SLUG: I noticed you have leather seats on the bikes. Is that custom, too?
Larson: Yeah, we do that, too–everything from gas tanks to fenders. We have English wheels, we make brake lights, little pussy pads, sissy bars, handle bars, any little fabrication, air box covers, foot pegs, I could just rifle off everything. The idea behind it is I’m poor as fuck, so I can’t go buy all the shit ‘cause it’s so expensive. So I just sit and stare at stuff and am like, “Oh, I could make that. I can use this part for this and try to make it before I have to buy it.” It’s rad ‘cause it gives the knowhow to be like, “Oh, I’ve done this before. This is easy, we can just do this. That’s how I’ve learned to do everything.

SLUG: You talk about gas tanks. How did you make the tank for Grendezz bike?
Larson: It’s from a ‘67 Dodge truck. I just cut it out of the hood. It’s sick, though, ‘cause it’s been passed down from a truck to a bike. Now we always just buy metal because it’s easier. Grinding all the paint off of something made in the 60s sucks. That paint is made out of lead, so you feel like shit after. It’s a lot cheaper and easier to just buy metal.

SLUG: The inside of the garage is like a piece of art. Do you guys use that for inspiration?
Larson: Oh, fuck yeah. All of it, everything in there, anything that’s rad. Say you buy a new tool and it comes with some weird warning label… I don’t know, any rad, weird art fag shit.

SLUG: Where do you get your ideas from for the bikes?
Larson: The Internet and magazines. Iron Horse. There will be bikes in there that you’re like, “That’s fucking ugly,” but there is one thing in there that you’ll be like, “That’s fucking genius.” There is always one rad part to a shitty bike, and then we incorporate that into our shit. Grendezz bike was inspired from this bike, El Sicko. It was just a real raw, sick-as-hell bike, just mean. We kinda took various parts from it and incorporated into his bike. That’s how it was in the beginning, but after you do something for a while, you figure out how you can tweak things to make it different.

SLUG: What kind of bikes do you work on?
Larson: Some Harleys and a lot of Japanese bikes, cause they’re cheap.  So you can get your own bike custom chopped for real cheap.

SLUG: So how much does it cost to get kitted out?
Larson: It just depends on what type of bike you start with. With a Japanese bike, Honda or Suzuki, you can do it for dramatically cheaper.

SLUG: Where can people check what you’re up to?
Larson: It’s SFK992.blogspot.com