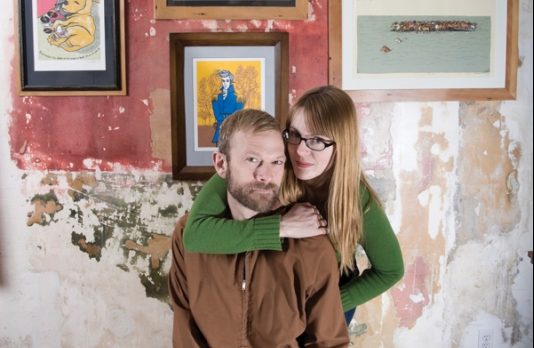 Leia Bell and Phil Sherburne’s house is the epitome of simple, artistic comfort. Framed prints decorate the walls and two large, loving dogs are the perfect welcoming party. Seated at their table for four, Bell and Sherburne share the beginning of their local poster and frame shop, Signed & Numbered, currently located under Slowtrain, and what’s in store for their relocation into two new locations, opening up early 2010.

Inspired by growth and new ideas, it’s time for Signed & Numbered to move out of the basement, splitting the focus of posters and frames into two locations. The first location, expected to open Jan. 2, will be in Sugarhouse (2100 S. 2105 E.) next to The Blue Plate Diner. “It may be a work in progress for the first couple weeks, but the place used to be a coffee shop and has a lot of windows and natural light which I think is good,” says Bell. This location will focus mainly on the frames. “Posters don’t sell enough to make a living,” says Sherburne. Though they’ll have some poster bins at this location, the shop has limited space, and the majority of posters and other handcrafted items will be located in Sherburne’s old woodshed at the end of Kilby Court which will open as a shop early spring of 2010.

We can say this growing love story started at Kilby Court, the beloved all-ages venue started by Sherburne. Bell, wanting to utilize her artistic talents, offered to help in show promotion by making fliers. “They started as Xerox copies for friends, and then Phil suggested I screen print fliers, since that’s what I went to school for,” says Bell. The suggestion eventually led to the thick-lined, multi-colored collectible screen prints she makes today. In Bell’s screen printing, she uses the photo emulsion process, using about 3-5 screens for gig posters and maybe 8-10 screens for an art print. Bell says the inspiration for her illustrations comes from her surroundings, “In the Kilby days I drew a lot of people from pictures I had taken in the indie rock scene we were surrounded by.” After having kids, Bell says her focus moved more towards animals. “Not that we’re surrounded by polar bears, giraffes and penguins,” says Sherburne. “But it’s something the kids enjoy and everyone else can relate to,” says Bell.

With the start of the Bell-Sherburne family, the decision to sell Kilby was a natural one. “We weren’t making money with Kilby, and with kids we were living a little unrealistically,” says Sherburne, “it was time to move onto something a bit more grown-up, and with regular business hours.” Thinking of the giant poster collection and Bell’s connections in the printmaking field, a poster shop was the best answer to their question of ‘what’s next.’ “It was something Salt Lake didn’t have, and it seemed a good way to make art more accessible to everyone,” says Bell, “If you have a small amount of money, you can buy a magnet with the design instead of spending thousands of dollars on an oil painting.” “And it’s still connected to the music and art scene, which we love,” says Sherburne.

It didn’t take long for Signed & Numbered to become much more than just a poster shop, though. “It’s much more real, more of a gallery,” says Bell. Through Gigposters.com, then onto conventions and festivals such as Flatstock, friendships brought more artists, and the shop started bringing in new styles and fine art prints. “The business takes up a lot more of my time than I expected. I wasn’t really prepared for that,” says Bell. Aside from purchasing your favorite prints you can also have the posters you’ve snagged from street corners framed with Foxy Frames, the other half of Signed & Numbered, to preserve the design. “We started with Ikea frames, and then decided to bring Phil, who’s a carpenter, in to make unique custom frames. Created with recycled wood, they have many simple frame designs to choose from or custom designs.  “We’re actually working on new stuff using molds and plaster to create unique designs,” says Sherburne.

For those who have frequented the basement shop during Gallery Stroll, they plan to keep their presence in the Broadway area. “We’ve been talking with Ken Sanders about working with him four [Gallery Strolls] out of the year to help him with his busy schedule,” says Bell. Though they’re very busy with work and family, they both agree they look forward to Mondays. “We love our kids but we love going back to work and doing what we do,” says Bell. “We started young and now we’ve made a career out of it,” says Sherburne, “we have an awesome life and we do what we love.”

As for any aspiring local artists/business owners, Sherburne says “Just jump in. Do it before you have kids, it gets a lot harder when you have kids, but you have to be driven especially as an artist, and you have to be willing to work but make sure you love what you’re doing.” And don’t worry if you have to explore to find yourself happy right back where you started. Creativity, music and family––nothing could be better for the community.