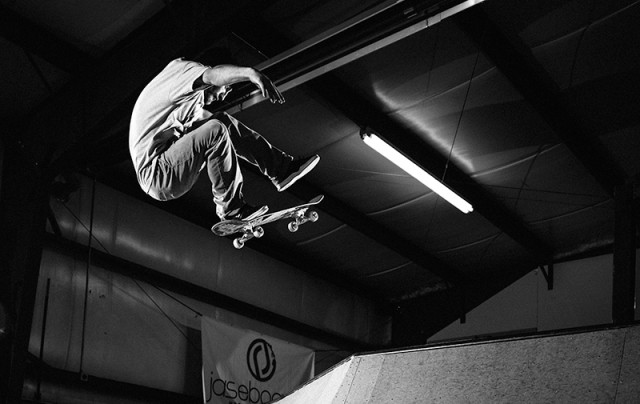 Banzai Skatepark opened their doors around six months ago. The park shares space with the distribution facility of Jase Boards, a local longboarding company. Banzai is in the town of Lindon, Utah, which is about 45 minutes from Salt Lake. SLUG recently had the chance to speak with the general manager of Banzai, Grant McCarty, about some of the finer points of the park.

SLUG: Why the name Banzai?
Grant McCarty: Jase Boards is based out of North Shore, Hawaii, and their home park was named Banzai, which is across from the famous Banzai Pipeline. We wanted to pay homage to that park and keep a relaxed vibe to it. It’s just about having a laid-back atmosphere and having a good time.

SLUG: What made you decide to get into the business of managing a skate park?
McCarty: I was originally hired just to build the park, but through conversations during construction, they let me know they needed a manager. Jase eventually shot me an offer and the rest is history.

SLUG: Were there any challenges you had to go through in order to open the skate park? E.g. permits, paperwork, money.
McCarty: We had to go through the planning commission and got all the necessary permits just to make sure everything is legit. We took about four months to build the park, and most of that time went to the construction of the bowl. It was just two of us building the park with some random people helping here and there.

SLUG: How often does Banzai hold contests, or other functions?
McCarty: So far, we have held one concert and one contest. Fictionist played here not too long ago. They also played [Provo’s] Rooftop Series with Neon Trees.

SLUG: Which features in the park were you most hyped about when it was being constructed?
McCarty: For me, it was the bowl. With indoor skate parks, you need something to draw people. I felt that an all-wood bowl would cause people to want to come down, and for the most part, that has been true.

SLUG: How did you get in contact with Devin Graham for the “5001 Balloons!” video?
McCarty: I’m actually longtime friends with him, so I just called him up and presented him with the idea. I knew it had to be a good enough concept where it would work on his channel. After talking about it, he felt like it had potential and wanted to see what he could make of it.

SLUG: How big is the skate scene in Utah County?
McCarty: It’s actually surprising—you wouldn’t think there are as many good guys here, but there have been plenty of them coming out of the woodwork and visiting the park. It’s a pretty good scene.

SLUG: How much does a trip to Banzai cost?
McCarty: It costs 6 dollars for one day. It’s not session-based, so if you want, you could grab a bite to eat and come back an hour later and still be able to skate. We also have three-, six- and 12-month passes available.

SLUG: Are helmets required?
McCarty: Helmets are required for people under 18, and everyone who skates has to sign a waiver.

SLUG: What sets Banzai apart from other indoor skate parks?
McCarty: A lot of it has to do with the vibe. I wanted to embrace the size and make it feel like a backyard session. We will get sessions where we have a bunch of guys standing around the bowl, slapping their boards on the deck and cheering for one guy ripping the bowl. Plenty of guys come and just watch their homies skate.

The park has features for all skill levels. If you aren’t comfortable with skating the bowl, Banzai features a mini-pipe, wall ride and a couple of rails. The park may not be as big as some of the other indoor parks, but the flow feels comfortable. Banzai wants to hold events at least twice a month. If you are looking for a venue for your death reggae band, Banzai might be the place for you!