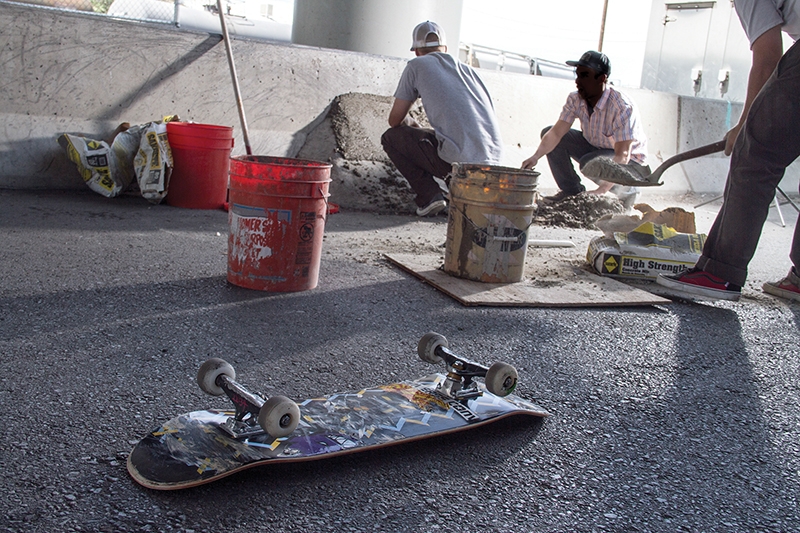 DIY Spots: If You Build It, They Will Come

It’s past the dog days of summer, and you’re getting tired of riding your favorite parks in the blistering heat. The best street spots are crowded with people and are on high patrol by The Fuzz. What do you do now? The answer is to go out and Do It Yourself! That’s right, strap on your thinking cap, fight off the haze that the PBRs and wacky tobaccy have left lingering on your brain this summer and put your creative mind to work. Do It Yourself, or DIY, spots have always been a part of skateboarding and the progression that lies within it. Chances are, if you have ever stepped on a skateboard and at least tried to do something with it, you have probably done some DIY work yourself. Whether it was waxing a curb, building a backyard ramp, or sacking yourself on a homemade rail, you have done it yourself. The DIY attitude has grown quite a bit over the years, with people building entire parks themselves, mostly with nothing but concrete, chicken wire and a case of beer. Given Salt Lake’s broad surroundings of everything from the industrial parts of Downtown to the outdoor scenery of the Wasatch, we decided to go on an excursion of our own to see what the DIY craze was all about. We recruited some comrades along the way, whose names will remain a mystery, given the circumstances, as will the locations of the places we visited. Nothing comes cheap in this world, so get out there and go get it.
Skaters are a funny breed. The way a skater sees his or her surrounding environment is a way that few people see it, but, if you’re a skater, you know what I am talking about. Says our comrade, “You go down alleys you would never usually go down. You see things like barriers or ledges and you see something completely different than other people. There is so much potential in things that most people don’t even really look at.” These creative concepts of the environment have helped to spawn the ever-forward progression that is skateboarding, as well as the ideas for public skateparks. These potential skate spots also seem to always need to be tweaked or worked on a little bit. Or maybe they need to be created into something different altogether. That is where a DIY skate spot is born. There is nothing more American than crafting a masterpiece with your own bare hands for future skateboarding to take place upon. Our personal mission on this day led us to the scene of an unfinished spot that our comrade thought needed a bit more work. With some bags of Sakrete, water buckets, trowels and wishful thinking loaded up, we were off to finish what had been started.
We got to work pretty quickly, pouring and shaping the spot up to be something great. The classic Jersey barrier setup was the backing support and lip to what the brains of the operation would shape into a quarter pipe. Getting on the top of the barrier was the plan, but it was definitely not for the faint of heart. It is amazing what can be accomplished by a couple of skate heads with determination and creativity in their minds. “You watch videos of spots people have made, and it’s like, ‘Why can’t I do that?’” says our comrade. This is a prime example of just how creatively the skater’s mind works. With 15 years on the plank, our comrade was very familiar with the process of working hard to accomplish something new and fun. I mean, hell, when you find enjoyment out of flipping a piece of plywood around for hours on end, while continually putting dents and dings into your shins and other body parts, you know you are a little bit special.

DIY spots are much more than just hard work—they are also a source of inspiration. There are no rules to it and no one stopping you from doing it. Unless, of course, you are on someone else’s property, which is the case 99 percent of the time with skateboarding, but that is a slight detail. “You need to have a good location. You can’t just build anywhere, or you’ll be getting destruction-of-property tickets all day,” says our comrade. “Get a good location and just try it. You can build something and make it your own and then have the satisfaction that you created something.” Building skate spots is a trial-and-error kind of thing, and, usually, the structure does not stay around forever. The process is a learning experience within itself. “It’s just like starting a new job. You learn and start doing things, and you start becoming a master at it and start perfecting it. It may not be there forever, but you teach yourself something new,” says our comrade.

Our travels this day concluded with our arrival at a fairly new backyard ramp that our comrade had a hand in, as did some other skilled day laborers and beer drinkers. Backyard ramps are another means of a DIY spot without the risk of the public eye glaring at you. There are not many things in this world better than getting a good group together to barbecue and skate a ramp all day. “In the past two years, I have met probably 15 different people with ramps in their backyards. They are all really good people—they are all friends with each other. We all love skating and love the same kind of music. I’ve become part of this collective of people with the craziest ramps and bowls, right here in the valley,” says our comrade. Aside from the satisfaction of creating something yourself, DIY spots and ramps help make the skate community what it is. If you’re a person who is lacking friends in this valley, put a ramp in your yard! Chances are, you’ll be flooded with more friends than you can handle in no time.

DIY spots are always going to be a part of skating. Whether it is legal or not, skaters going out and doing what they love will never be stopped. If you are a person who is thinking about doing something of your own, go out and do it. Obviously, putting a concrete ledge in the middle of 700 East is not the best idea, but putting in hard work to make something of your own to skate is a great idea. Portland has Burnside and Philly has FDR. Both were started from nothing more than a bag of concrete and a bright idea. Without further adieu, grab some chicken wire and some concrete of your own and go get it. If you want something done in this world, you got to do it yourself!
Photos: