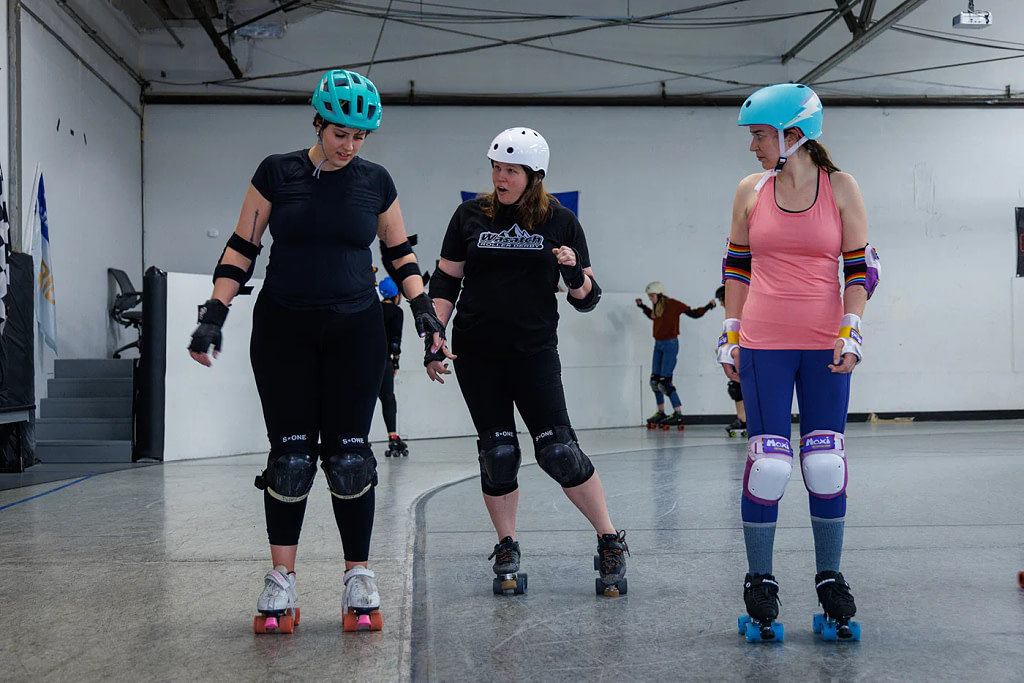 A special kind of community forms when a sport is compared to playing chess while driving NASCAR and having bricks thrown at your windshield; KT Buffington of Wasatch Roller Derby knows it well. “[Roller derby] is not like any sport out there,” Buffington says. “It is mentally and physically rewarding, and you gain a lot of new friends and skills! Plus, who doesn’t like looking cool on roller skates?”

As the Director of Athletics for the Wasatch Roller Derby, Buffington manages a team of trainers that focuses on the complex physical and mental aspects of roller derby. While it may seem intimidating for some, Buffington assures that there’s space for you. “It provides a safe place for literally all people,” Buffington says. “If a person is willing to learn, experience new things, can play in a team and is open-minded, derby welcomes you.”

Roller derby allows Buffington to “speak the language of an athlete,” she says, something she had wanted to do since a scoliosis diagnosis in 7th grade kept her on the sidelines. In 2013, the Coal Miner’s Daughters, a Wyoming derby team, drew Buffington in. “I wanted a new kind of workout and a place to be myself as a baby gay in a state that doesn’t exactly support its LGBTQ+ community,” she says.

Wasatch Roller Derby offers that safe space with a specially designed skating crash course tailored to beginners. Kimber Gabryszak, who recently graduated from the crash course, hadn’t skated in roughly 20 years. Within the first lesson—centered around learning how to fall safely—her confidence quadrupled. “All the skaters were so encouraging,” Gabryszak says. “I went from hardly [being] able to stand at the start of the class to trying fall drills confidently with the trainers.”

That’s the main goal of the crash course—self-confidence. While Buffington says new skaters can certainly expect aches and pains in places they’d never thought possible, learning to get up “regardless of the odds” makes the course worth it. “Self-confidence is the gold at the end of the derby rainbow,” Buffington says.

“Self-confidence is the gold at the end of the derby rainbow.”

It worked for Gabryszak, who says she’s walking away with not only more confidence, but stronger legs, a cool nickname and amazing new friends. “I fell in love with skating, derby and, frankly, with all the skaters and coaches,” Gabryszak says. “It’s such a great community—encouraging, accepting, fun, supportive, welcoming.”

Just weeks after her crash course graduation, Gabryszak is already signed up to skate within the league and wants to learn to ref. “Derby is going to be a large part of my life for physical fitness and recreation,” she says. Her advice for new skaters? You won’t know if you do or don’t like it unless you try. “Give it a try! Don’t be scared,” Gabryszak says. “It’s such a great world to investigate and you’ll be welcomed with open arms.”

Wasatch Roller Derby was hit hard by the pandemic, but Buffington hopes to rebound with a building full of people who love the sport. Currently, the league is holding tryouts for their competitive travel team, and the nonprofit league is always looking for new sponsors and partners. “We would love to see the love of roller derby grow and expand so that skaters and spectators can find a safe place and a new passion,” she says.

Keep up with the league via their Instagram and Facebook, @wasatchrollerderby. Games are about once a month, and you can sign up for the crash course through their socials. “Come and learn about our sport,” Buffington says. “It is so important to have representation in the world and in sports of real people, and that is what derby does.”