Hill bombing is the foundation of skateboarding. Sometime in the early 1950s, California surfers started unscrewing the trucks from their roller skates and began attaching them to carved planks of wood in an effort to figure out how to surf the streets. Skateboards were skinnier then and had clay wheels, but they still got the job done. Searching for the perfect concrete wave when the ocean lay flat became a daily occurrence among the California natives, until pool skating got big in the ’70s. You see, cruising hills wasn’t like the skate park back then—it was the skate park. Since that time, the concrete wave has only grown.

The Concrete Waves of the Great Salt Lake 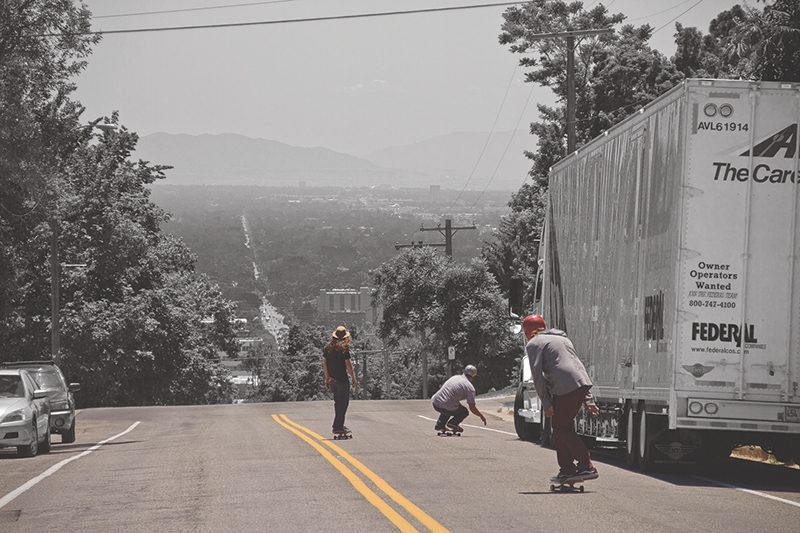 There’s nothing like a near-death experience to bring the homies together. Photo: Jake Vivori

Hill bombing is the foundation of skateboarding. Sometime in the early 1950s, California surfers started unscrewing the trucks from their roller skates and began attaching them to carved planks of wood in an effort to figure out how to surf the streets. Skateboards were skinnier then and had clay wheels, but they still got the job done. Searching for the perfect concrete wave when the ocean lay flat became a daily occurrence among the California natives, until pool skating got big in the ’70s. You see, cruising hills wasn’t like the skate park back then—it was the skate park. Since that time, the concrete wave has only grown.

Hill bombing is really fucking gnarly nowadays. Just YouTube “hill bombing” if you don’t believe me. At 40-plus miles per hour on your board, it can be do or die—I guess that’s why it’s so fun. It’s playing on the edge, holding on until you can’t hold on anymore. The feeling I get when bombing a hill is almost indescribable. While I’m going uphill, a rush starts to build—not so much adrenaline at this point, but the anticipation of adrenaline. I find myself taking in things I feel others who do not skate would not. Things like stop sign locations, potholes, branches and rough patches of ground are key checkpoints in a successful cruise. When I arrive at the top, I stare down the slope, take my first of many deep breaths and bump something gangster in my headphones.
When you drop in and take your first couple of pushes, everything will start to come in line. I like to pop a little ollie as I start to build up speed and take off, then tuck into a power stance—a position that holds my balance steady with a little weight on the front foot for stability at high speeds. Then the rush kicks in. If you’re unfamiliar with the form of adrenaline rush that hill bombing can produce, it feels like riding the sketchiest roller coaster ever, with no seat belt, or getting chased by a rhino across Africa. Jason Gianchetta thought back to his past when I asked him how to bomb B Street in the Avenues and not get scared. “The first time I bombed a hill and didn’t get scared was when Lizard King taught me [that] no matter how big the hill, your body weight and the steepness of the hill will only allow you to go X. If you can get comfortable going X, you can bomb any hill you want,” he says. It is hard to get comfortable at X for me, though. It isn’t until I’ve ridden away and I’m at the bottom that a soothing feeling comes over me.
When bombing hills, I always make sure to rock a helmet. I know helmets may not be the coolest, but bombing hills is super dangerous. There are too many shitty drivers with the attention span of squirrels who won’t see a human bullet waving their arms at them. No matter what your skill level, it only takes one wrong pebble or turn to change a fun lap into a nightmare.  Bombing hills is bonding with your homies through near-death experience. It’s challenging your board-control skills, mental strength and your overall ability to fight. It’s a constant battle with your legs to hold on through the three stages of speed wobbles. The first stage of speed wobbles is when your feet start to fall asleep from the vibration through the skateboard—this is easy to get through: You just keep rolling. The next stage of speed wobbles is when the vibration moves up into your legs and starts to loosen your knees—you can still roll right through this with some fight. The last stage of speed wobbles is when your lower body has loosened up so much, your board starts to make “S” swivels. It is possible to still ride through this, but not as likely. Ways of avoiding speed wobbles include doing a little foot drag to slow yourself down, or learning to power-slide.
One of my favorite homies to do University runs with is Dave Doman. Doman is the man! He’s got the best vibe and any session skating with Doman is sure to be an enjoyable one. A few years ago, in August of 2009, before we met, he had an unfortunate skating accident on his way to go surf in California. A mellow hill and a shitty mishap landed him in a coma. The skate gods must have been chilling with Doman hard because he is now fully recovered, and a continuing inspiration to me to keep wearing my helmet—he never skates without it.
I don’t want you to get longboarders confused with us, though. Longboarding is a totally different experience, even though we may seem to have a lot of similarities. When the ollie was invented, it was groundbreaking—being able to pop over cracks and curbs was a miracle. When it comes to hill bombing on a skateboard, being able to power slide at high speeds without the use of plastic-handed gloves is a hard skill to learn, and requires a lot of time, pain and commitment. No true skateboarder would ever go back from that to some no-trick cruiser board. All across the U.S. in places like Los Angeles, and recently at the University of Utah, communities are attempting to ban all hill bombing efforts, not only because of it being potentially dangerous for you, but because it can also hurt others. An anonymous source told me the reason they are cracking down on the no-skateboarding rule on University property is because an out-of-control longboarder crashed into a walking professor and broke her leg. It’s not that we hate long boarders personally—we just hate that people associate skateboarders with them. It’s unfair that just because they bought the Coupe de Ville of skateboards without even a learner’s permit, they’re grouped into the same category as a hard-earned skateboarder. We dedicate countless days to learning our craft.  Skateboarding is not something you just pad up for and host a jock-bro–style race—skateboarding is a lifestyle.
If you are looking to get into hill bombing, don’t look too far. Chances are, there is a hill just up the street from you. Salt Lake is the city of slope—mad slope. We’ve got skiing, snowboarding, mountain boarding, downhill biking and even those pesky longboarders. Tighten up your trucks to avoid speed wobbles, grab your helmet and huck it. There’s no feeling like escaping death. So bust it!
Photos: