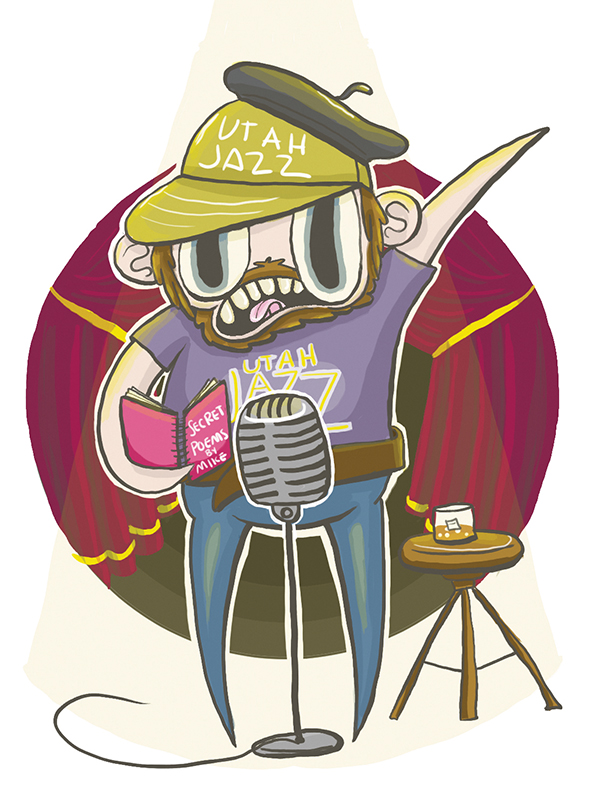 For this month’s Literary Issue of SLUG Magazine, my Editor sent me on special assignment to learn about slam poetry. Prior to learning of this beloved spoken-word art form, the only slams I was familiar with was slam-dancing, slam dunks, the Grand Slam breakfast combo at Denny’s, and the classic early-’90s hit “Slam” by the hardcore rap group Onyx, which goes: “SLAM! Da, duh, duh! Da, duh, duh! LET THE BOYS BE BOYS!” An underrated hit for sure.

I took a writing class at the SLCC Community Writing Center at the Downtown library. The teacher’s name was Kari Lindsey Barry, and seeing how her name rhymes, I had no doubts that she was qualified to teach me the art of the slam poem. Obviously, the first thing I needed to learn was: What is a slam poem? Was it just a ploy by independent coffee shops to get customers away from Starbucks? Was it an art medium started by rappers who couldn’t put rhymes together or work with a DJ? I had no idea.

Alas, no. Slam poetry is a form of spoken word that doesn’t even have to rhyme. It is generally performed in a competition format where poets get up to three minutes to recite an emotional ranting of sorts using metaphors and gesticulations to invoke and create a picture the poet is trying to perpetuate. The three basic elements of a slam poem are imagery, metaphor and magical realism.

There are several, local open mic nights and even a nationally accredited slam circuit. Surprise, surprise—most of these take place at coffee shops. Although, I have no idea what the prize purse is for these national competitions. I’m assuming you just win some coffee shop coupons or something, or VIP access to a Bernie Sanders rally.

Since slam poetry is often formatted in a competition style, there are some rules. The format consists of 10 slammer-jammer poets engaged in three rounds of verbal combat. They get eliminated à la The Bachelor TV show down to six in the first round, then down to four, and then a final victor is decided by the judges, snaps and stomps of the caffeine-infused crowd. No props are allowed (sorry, Carrot Top), and no nudity (sorry, me). You would think the no-nudity rule would be a given, but it was stressed in the class I took, so I’m only assuming that someone got buck wild once upon a time at a poetry reading.

Slam poetry was started in Chicago around 1984, the same year another Chi-Town slam artist named Michael Jordan was drafted. Although, the two are unrelated. An American poet named Marc Smith is credited with starting the fast break that lead to the slam.

Though there are no formal rules as to the contexts of a slam poem—which could be detrimental to art in general—almost all the slam poems I found on YouTube were politically charged or had a strong undertone of social issues—especially issues that strike an emotional chord. Seeing as how I prefer to keep politics out of my column, the slam poem I wrote below is about basketball—in particular, the Jazz’s current ,struggling season. It’s something that strikes an emotional chord with me.

Now, please keep in mind that slam poetry is a performance-based art form. So I’m not exactly sure how my piece will translate to print. This isn’t meant to offend other slam poets, whom I get the feeling are easily offended. But since I promised my SLUG Editor we would publish my slam poem, take it with a grain of metaphorical salt. I’ll try to use some bold font and caps lock to represent my gesticulations, but don’t expect to see me perform this piece anytime soon outside of the Delta Center.

The Plight of the Diehard Jazz Fan

The diehard fan, the man, the one who CAN, realize that free agency isn’t very free at all as we watch our stars fall out of the sky that is our starting lineup and drop and depart to larger arenas with better halftime shows …

We diehard fans brace ourselves for rising season ticket prices, rising like a toxic tide as we DROWNED in a sea of tainted Gatorade …

But through our gargling, muffled voices, we CHEER on.

With referees rigged AGAINST us by the corporate elite that is Nike, we swoosh away the dream of ever reaching a playoff finals again and again. These officials aren’t official or efficient at all. Instead of choking on the whistle, the whistle blows out all our hopes like a reluctant birthday candle reminding us that all these BAD calls on the balls are just a systematic symptom of the PLIGHT that is the small market …

The injury bug, biting our bench and our starters with a blatant disregard for karma or talent or coaching.

And yet we cheer on …

How can we rebound from our lack of rebounds? With an entire franchise’s hopes and dreams that lie upon the back of a rambunctious rookie, will we ever be relevant again?