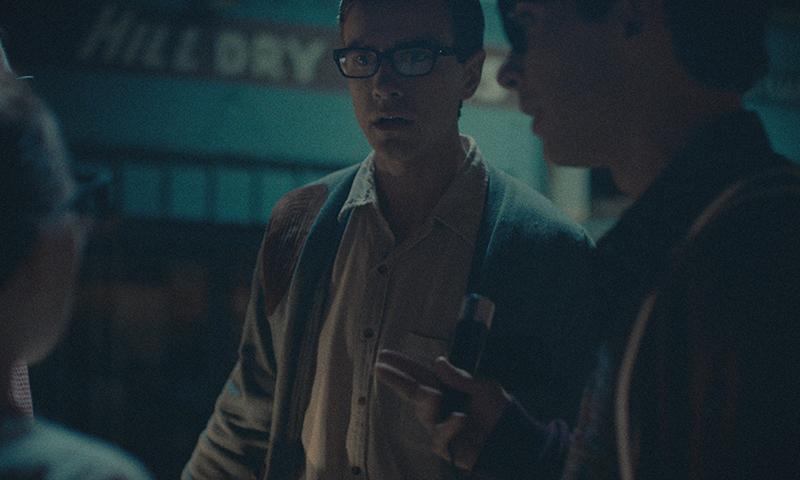 Director Andrew Patterson is tired of film’s limitless trajectory. Unlike print, audio or theatre works, which he says have “massive limitations” that lead to “wonderfully interesting ways to explore creative boundaries in those art forms,” film continues to expand in newer and stranger directions: “To the point that we are bored by what we see,” Patterson says. “We’re bored by battles with a million soldiers fighting each other in a fantastical land. We’re bored by journeys through space.” This elicits the question of when the allure of high-gloss visuals and escapist world building has faded away, where do you go?

For Patterson and his team, including screenwriters James Montague and Craig W. Sanger, the answer comes in their starkly minimal sci-fi drama, The Vast of Night. Set in a small rural town in 1950s New Mexico, the film follows two high school students, played by Sierra McCormick and Jake Horowitz, as they attempt to unearth what may or may not be signs of extraterrestrial life. Horowitz plays a local radio host, McCormick the town’s switchboard operator who’s recently taken an interest in tape recorders.

Fittingly, much of the film plays out over the airwaves and through tapes, cutting down the reliance on visual cues. “I chose to make a movie about people telling stories to each other, carefully and quietly,” says Patterson. This focus on dialogue and audio leads to some incredible, unnerving sound design, as well as many long takes, either remaining fixed on a single character during an extended exchange or, in the film’s most jarring scene, leaving the audience to stare at a black screen for over ten minutes while key plot points unfold over a conversation between Horowitz and a radio caller.

Aside from radio, much of the film revolves around the exploration of then-newfound technology—tape recorders, broadband interference and fluorescent lights. This plot point provides The Vast of Night with a timely message. “Technology has a fascinating effect on any generation, any decade, to those who are invested in it,” says Patterson. “Our two characters are very invested in technology. They love it, and it connects them.” It’s easy to fall into a trap of thinking a life infiltrated by tech is only pertinent to the 21st century, but Patterson and co. affirm that, as long as the humanity-machine dichotomy has existed, so has the need to navigate life within and around it. –Connor Lockie

Read the full Q&A with director Andrew Patterson below. For more information about THE VAST OF NIGHT and the 2019 Slamdance Film Festival, visit showcase.slamdance.com.

SLUG: What informed the decision behind the setting (small, suburban 1950s town)?

Andrew Patterson: There is a lot of mythology about close encounters and unidentified flying objects associated with New Mexico. I think back in 2012, I first had that thought and curiosity. There is a lot of strong imagery and pop culture surrounding that idea, but no one had taken those myths even remotely seriously. And so, the setting itself was absolutely the first kernel of an idea for the film. It was always supposed to be New Mexico; it was always supposed to be rural; it was always supposed to be about something we knew—a story we knew about people seeing something that they couldn’t identify—a familiar place and story but told with honesty, excitement and the mystery of what that might feel like if that was to occur.

[It was] trying to create the wonder, the mystery and the magic of a place that we thought we already knew, but from a new perspective, with a new lens, with new sensibilities, set to a modern standard of what film looks like.

SLUG: How does seeing/not seeing, especially in the long-takes and black screens, play a role in your filmmaking?

Patterson: I often feel like we [in film] will always be an inferior method to novels, plays or radio because each one of those media have massive limitations as to how they can be consumed: With novels, you don’t get the image; with radio, you don’t get the image; in theatre, you are limited by space and resources. There are wonderfully interesting ways to explore creative boundaries in those artforms, ways that film kind of just keeps figuring out and expanding the boundaries of. Now, we are bored by what we see: We’re bored by battles with a million soldiers fighting each other in a fantastical land; we’re bored by robots transforming out of cars and fighting each other on the highways; we’re bored by journeys through space, and so on. I wondered, if I took away everything except a human telling a story, if that could somehow be more engaging—I believed it could. I believe that there is value in a human talking that trumps everything else in the world. A story well-told can be more engaging than anything else. So, I chose to make a movie about people telling stories to each other, carefully and quietly. Sometimes you see those people, [and] sometimes you don’t. For example, at one instance in the movie, there is a radio conversation between two characters. You don’t get to see radio. I wanted to have a conversation between two people over the radio, and I wanted the viewer to have to sit in darkness for some of it, not least of all because there is a lot of things that one character is left in the dark on, but also because you’re listening to a radio show. I thought it was pretty obvious that, if you’re listening to a radio show, you would listen and you wouldn’t necessarily have something to watch the whole time. Seeing and not seeing is a tool that I tried creatively, and I wanted the limitations of other media, particularly theater. If you look closely, this movie is theatre. I’d love to see a stage-play or a podcast of The Vast of Night. I love that idea.

For me, it wasn’t so much seeing and not seeing as it was applying limitations, making them interesting and sticking with those limitations all the way to the bitter end. Seeing what you could do to make a movie with the same kind of limitations as other media.

SLUG: What is the relationship you film has to technology as a subject?

Patterson: The future is coming, and it’s going to sweep us away. I wanted a visual that indicated that, really showed it. Technology has a fascinating effect on any generation—any decade—to those who are invested in it. Our two characters are very invested in technology. They love it, and it connects them.

I guess the film itself is about how technology is coming—the future is coming—and it’ll sweep us away.

This interview has been condensed and edited.