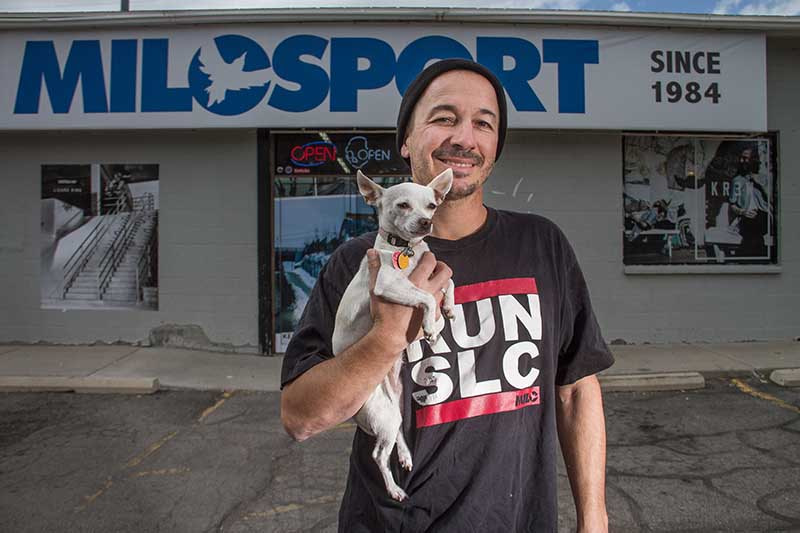 30 Years Of Ripping: An Interview With Benjamin Pellegrino

There is something sacred that lies within a local skate and snowboard shop. Benjamin Pellegrino is the co-owner of Milosport, one of the best and longest-standing shops in Utah. Started by Dimitrije Milovich (founder of Winterstick and namesake of Milo) and Duane Bush in 1984, Milosport has been serving the local skate and snowboard community along the Wasatch Front for 30 years. With shops that have come and gone in Utah, Milo currently serves locations in Orem (started in 1997) and Lafayette, Calif. (started in 2000), along with the SLC shop. Having been involved since 1994 as a knowledgeable participant in the up-and-coming skateboard scene, Benny found a permanent home in Salt Lake at Milosport. SLUG sat down, fittingly enough, on a waxed curb, to get the scoop on Benny, Milo and the history behind it all.

SLUG: How did you first get involved in Milosport?
Pellegrino: I was living underneath George Johnston [current owner of Milosport in Lafayette, Calif.] up at Snowbird, and I had just quit my job. He knew I was a sponsored skater and he skated, too, but didn’t know much about it, so he asked if I could help get things going. The shop was originally on 2000 East and 3300 South and started as a windsurfing shop. The shop carried skis, mountain bikes and sailboats and even catamarans at one time, so that’s where Milo “sport” comes from. Calvin Egbert took over the SLC shop in 1995, and Todd Mitchell and myself purchased the Orem shop 1999. That’s when we found our niche and became totally invested in the skateboard and snowboard industries. We had a ramp in the parking lot, which helped let people know we were into skateboarding. Since then, I’ve done everything from being an employee at the shop to now a co-owner, buyer, bookkeeper, seller and pretty much any other thing I can help out with.

SLUG: Whom were you hooked up with as a sponsored skater?
Pellegrino: I was with Black Label, Thunder and Spitfire. I was one of the original Black Label riders under John Lucero. We skated a warehouse that you had to pretty much pass a test to be able to ride in. I met Corey and Gavin O’ Brian there and got hooked up—that’s when Lucero asked me to ride for Black Label. That was around 1987, and he flowed me decks up until ’94 when I said I wasn’t moving back to California.

SLUG: What was the skate scene like when you first tried to push it?
Pellegrino: It was backyard ramps and street skating. One of the original crews of kids was called The Dirty Hessians, and they were a big part of creating the scene around here. Guys like Mark White, Tom Blosch, Shane Justus—they did the most pushing it. We held contests in [Milo’s] Salt Lake parking lot, when it was still good to skate on, with quarter pipes and pyramids on wheels that we would push out. This was all before the skatepark era, so it was all pretty new and not mainstream. Now, with the parks and backyard ramps popping up again, skateboarding is as strong as ever. I’m stoked to see the older guys and the college kids longboarding, too. I’m just glad that people aren’t fucking rollerblading! Eventually, there is going to come a time when these people, as business owners or parents, are going to vote for putting a new skate park in or say yes to something skateboard-related because they do it, too. I’m sick of people talking shit ’cause, honestly, it’s rolling on four wheels, and that is the essence of skateboarding.

SLUG: Milosport is currently rocking one of the heaviest shop snowboard teams in the industry. How do the shop and the products within the shop reflect your riders, and what influence do they have on the shop?
Pellegrino: They influence the shop hugely. Those guys are always super vocal about what they do and don’t like. We will always try to support the brands our riders are hyped on or companies that they get in with. Stepchild was a company on our radar. We picked them up when JP Walker started riding for them and, subsequently, Brandon Hobush started riding for them. The team set the roots for the shop. Guys like Walker, Jeremy Jones, Jason Murphy, Jason Brown, Dave Downing, Travis Parker—without them, we wouldn’t have the notoriety that we have.

SLUG: What is the hardest part about keeping a local shop more relevant than the online or more commercialized shops?
Pellegrino: The stores and the shops that don’t give back to the sport and the community is what hurts us the most. Online sales don’t necessarily hurt us because we do it, too, but you can’t just take and take. You need to give back, and that’s it. We try to be involved with everything. For us, the most important thing is participation and community.

SLUG: What was the snowboarding scene like around the 2002 Olympics, and how has it changed since then?
Pellegrino: It was because of the fact that Park City [Mountain Resort] pitched to have the Olympics that there is even snowboarding allowed up there. When it came down to it, The Canyons [now Canyons Resort] could not hold it at the time and Deer Valley could not do anything snowboard related, so Park City said yes to snowboarding, and it was the ’96-’97 season when they first allowed it. The scene was low-key before that, with Wolf Mountain and Park West [previous incarnations of Canyons Resort]. Utah was known for just powder riding. There were no terrain parks or half pipes or anything. With the advent of urban riding coming from The Farmington Crew, which was Brandon Bybee, Mitch Nelson, Jeremy Jones, JP Walker and Jason Murphy, those guys put jibbing on the map here. They not only showed people that you could do that here but opened people’s eyes in the sense that, “Hey, I have that in my backyard. I can do that, too.” I think the snowboard world changed with a lot with those guys. Before 2002, there was not a lot of corporate sponsorship in snowboarding or a lot of big grand prix events or anything. Park City, after 2002, really stepped it up with their parks and that made all these other mountains step up their terrain parks, too.

SLUG: How do you deal with shop rats?
Pellegrino: Love ’em! They’re great. They support us and we support them. I was a shop rat, and the kids that are shop rats now will eventually be the ones working here. The shop rats are the next cycle and Benjamin “Benny” Pellegrino, co-owner of Milosport Orem since 1999, stands in front of Milosport’s flagship store on 3300 South in Salt Lake City with Chica Jones. the next generation of kids supporting skating and snowboarding.

SLUG: If you were not a shop owner, what would you be doing?
Pellegrino: Probably something similar within the industry. I would maybe be working in the mountains or doing more rep-type of stuff for a company. I’ve been skating since I was 11 and snowboarding since I was 16. At this point, I don’t know any different.

SLUG: Whom would you like to thank?
Pellegrino: Duane Bush for starting Milosport, Todd Mitchell, Calvin Egbert, Josh Roberts and every generation of the people I talked about, the new shop rats; Dennis Nazari and Tom Lee, who started Blindside, who has passed the torch to Todd Leaver; and all the small, independent shops that still do it. Supporting the shops that support the sports you do is a crucial part of creating a long-lasting scene for both snowboarding and skateboarding. Next time you need a new skateboard, snowboard, pair of shoes or to just shoot the shit about skating and snowboarding, take a ride up 3300 South or drop by the Orem shop and see what you can find. Until then, stay up to date and check out Milo on Facebook (facebook.com/MiloSportSnowAndSkate) and Instagram (@milosport).