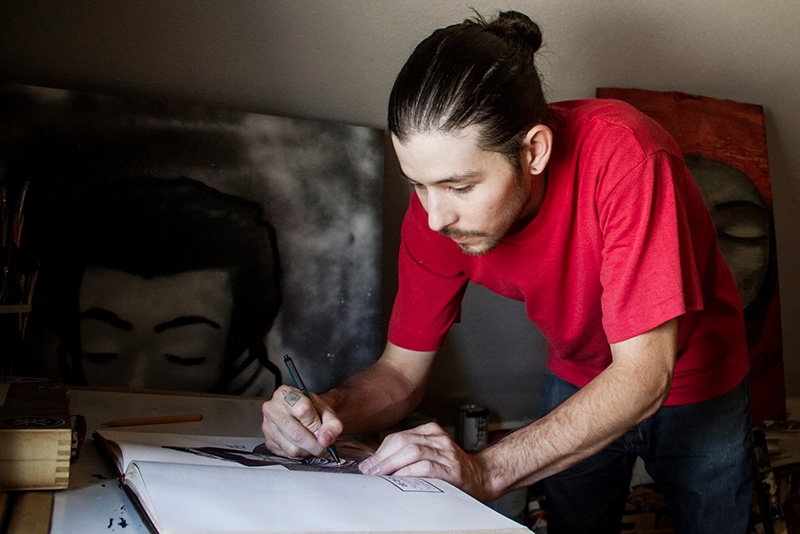 Like many artists, Casey Kawaguchi has been honing his skills since childhood. He has developed a style all his own, creating street-inspired art with a distinctive Japanese influence. His materials of choice—spray paint and scavenged wood—easily lend themselves to his style. Kawaguchi has managed to create a cohesive body of work that is instantly recognizable as his—something all artists strive for but many fall short of.

Kawaguchi’s unique style has been turning heads in the snow community, garnering attention from some local heavy hitters, including Discrete Headwear and 4FRNT Skis. This season, he’s bringing his artistic skills to the hills with a ski design for 4FRNT. He sat down with SLUG to talk about his art, his design process and what the ski industry holds for him.
SLUG: How did you first become interested in being an artist?
Kawaguchi: That’s just something I was born doing. That’s the first thing I guess I would say I identified as. That’s what I was good at when I was kid, and it’s just always been what I’ve done.
SLUG: How would you describe your style? Who are you influenced by?
Kawaguchi: I would describe my style as free—I’m a freestyle painter. I love to just go for it and let it be messy—almost like sculpting a piece, whittling it down to the details, but leaving a lot of the mess in there. I’m influenced by a lot of people. I’d say David Choe is a huge influence. A lot of local artists––I get influenced by seeing their stuff, like Isaac Hastings is a good buddy and fellow Salt Lake artist.
SLUG: How has the Salt Lake art community shaped you as an artist?
Kawaguchi: I’ve been in Salt Lake for four or five years, but I’ve always lived in Utah. I think it’s made me work harder. I wasn’t really tapped into an art network until I moved to Salt Lake. That changed the whole networking aspect with my technical aspect. That’s what really started my art career, was tapping into a network of other artists like that.
SLUG: What’s your relationship with the snow sport community?
Kawaguchi: I snowboard, but I’d say professionally, I’m linked in through the ski community through Skyler Thomas and Julian Carr, who owns Discrete. I was introduced to Julian through Skyler and started working with Julian, doing design work for Discrete, and just became friends with him. Then I ended up out in Colorado, I got invited to SIA [Snowsports International America] and I got to do a live painting at Red Rocks during Atmosphere, and that’s where I met Paul Yih, who was the creative director at 4FRNT [at the time]. After we all came back from Colorado, he got back in touch with me when it came time to design skis. He definitely showed a lot of interest when I showed him my work at SIA.
SLUG: Have you worked with any other local companies?
Kawaguchi: Discrete was my first in the ski industry. Then 4FRNT was my first actual ski design. It’s still up in the air whether I’m doing Julian’s pro model with Icelantic. He told me he wants me to, but it’s not a sure thing yet. They have a big designer for their company that does a lot of their design work, so it may get pushed his way.
SLUG: Do you think your style lends itself to the ski format, and how does your process differ when designing skis?
Kawaguchi: Certain parts of it I would say did transition over to doing skis really well. It’s a lot more thought out––a lot more has to be planned out. The process was a lot different with having to sketch it all out. Normally, I would just go straight to wood and not worry about having to transfer it over to digital. Design wise, I think it did transition well. Working with a client, it’s two people who have a say in the end results. It’s a back-and-forth kind of thing. Working with Paul and working with 4FRNT has been awesome—they give a lot of freedom to the artists that they work with. It was really cool to just get to do my thing for the most part, and he didn’t have a lot of restrictions on me, creatively.
You can see and purchase Kawaguchi’s design on 4FRNT’s Madonna ski for the 2013/2014 ski season on their website, 4frnt.com, and in local ski shops this fall. Follow him on Instagram @caseykawaguchi and on Facebook to check out more of his art and keep up on his new projects.