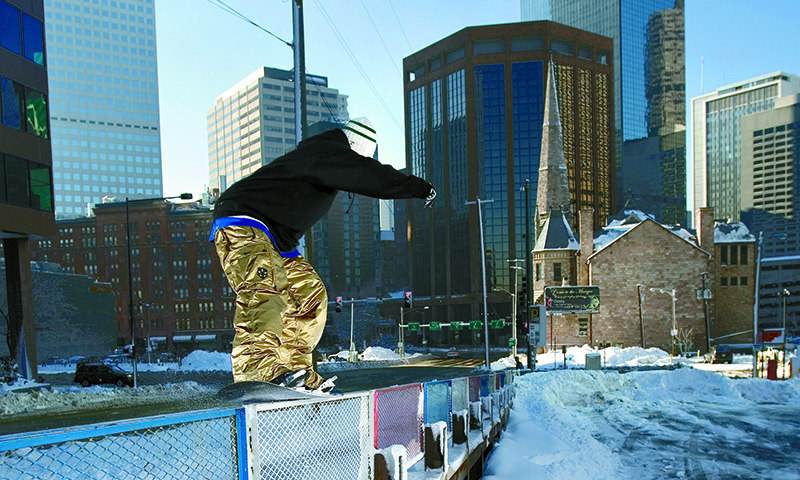 Damn son, it’s already the second month of 2007- – can you believe it? Well, SLC has not been the place to be this year if you love to get wicked while strapped in. Early on, even before the new year, Denver started getting dumped on, and its been a weekly event since. This sparked a filming riot in the streets of Denver. The city of Denver, although fairly close to the mtns, doesn’t get nearly as much snow annually as the Great Salt Lake. In fact, it rarely gets more than a couple inches that last no more than a few days. This year we are talking about feet and cold weather to make it last. So film crews everywhere are taking advantage.

Out and about in the streets of the city were the likes of all the top urban killers: Mark Frank Montoya, a Denver homegrown; E.C, Dead Lung, Phildo, Matty Ryan, J2, Justin Bennee, Kurt Wastell, Seth Huot, Stevie Bell, Darrell Mathes, and after a trip cut short from Europe, Mikey Leblanc, all filming for either F.O.D.T , Absinthe, Mack Dawg, or BozWreck. And on the girls side: Hana Beamen, Laura Hadar, Desiree Melancone and Jaqui Berg, all filming for the new chick flick RUNWAY FILMS, Colors. Denver is a little bigger than Salt Lake, therefor the shots that came out of the city are sure to please the urban eye. Plenty of new rails, urban bomb drops, ollie gaps and believe or not city booters are all in the mix for next years videos.

In industry news, the newest and freshest is this: Nike is dropping back into snowboarding. You may remember a couple years back Nike dipped into snowboarding with its program ASG. Well, with lack of anything original and not staying true to their Nike roots they totally botched it. ASG was a huge disaster in the states and never took off so they called it quits about three or four years ago, but in Europe it never failed, so technically its still alive, just over there. What Nike learned thru their loss in the snow community, and later through their success in the skate community with Nike SB, was that they had to stay true to their own style, to who they really are. Just like anyone else in this world, if you try to be something your not, people will be able to see thru it and won’t be into it. So with that said, Nike took a step back and gathered themselves, hired some new designers and are now ready to do it right. Nike will launch its boots and outerwear in fall of 08. So far they have signed Justin Bennee and Eric Jackson for boots and outerwear and myself and Louie Vito for boots and shoes. Now you may have noticed some strange Nike ads in the magazines lately and thought WTF? But be aware, these silly cartoon ads have nothing to do with the Nike Snow project. These cartoon ads are part of their 6.0 program. After the success of Nike SB, which is only available in legit skateboard shops and not in big brand, big box, or not skateboard related stores, Nike decided to bridge the gap of people who liked SB but weren’t involved in skateboarding, so they came up with 6.0. From what I know they have a few young snow kids signed, some wakeboarders and maybe even some moto-cross guys. This is a totally different thing from Nike Snow, and from the gossip on the street, the basic prototypes for the boots Nike is making are amazing. Nothing too juicy, but expect Nike SB in boot form. And you know they have the technology to make it one of the most technically advanced boot on the market.

In other shoe news, DC is spreading their brand all over the body of some major snowboarders. They have gone all Burton on us and are now making boards and bindings to go with their newly founded outwear, and old (but not necessarily good) boot line. So far the rumors are that Lauri Heskiri and Devun Walsh both broke some big time contracts with Forum and Special Blend to sign with the all-in-one sponsor. Word on the street is there are a few more coming as well. No names yet, but you know their bank accounts are going to inflate once it happens, as all the riders are coming from well established places with their former sponsors.

So until the names drop and the games get popped, have fun shralping and stay tuned for more juicy romance gossip, not to mention a journey to Asia by yours truly. Time to see how the other half lives.