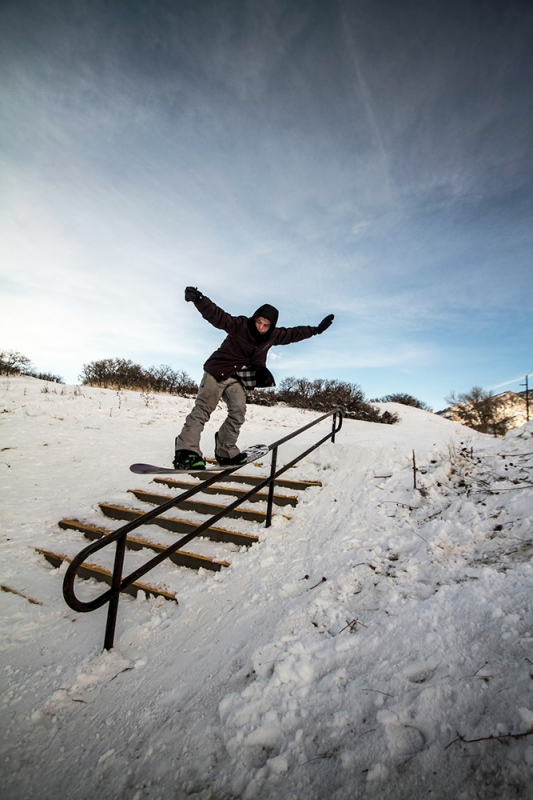 Anyone following the world of snowboarding over the past few seasons knows Lick the Cat. Those who haven’t figure it’s got something to do with new, somewhat painful advances in bestiality trends, or a reason for your girl to break up with you after she hears those words and her name at a New Year’s party. That second answer is actually closer to accurate because it all started with the Yelawolf song, “Lick the Cat,” playing at a ski resort. But still, what exactly is a Lick the Cat? In short, we’ll call ’em a tight-knit group of friends who enjoy shenanigans, making snowboard films, and who have Crash Bandicoot on N64 hooked to the TV in front of their toilet.
“Lick the Cat is just a group of homies that love to board and hopefully remind people to keep the fun in snowboarding when it gets way too serious. That’s the reason everyone started boarding anyways … to have fun,” says cat licker, Milosport shop employee, U of U student and Nitro team rider Griffin Siebert. “It started with Sam [Taxwood] Ben [Bilodeau] and the Big Jerm [filmer Jeremy Thornburg] making a handycam edit, when the Yelawolf song was just released.  One thing led to a next, and the dumb name stuck.” Thus, Lick the Cat pawed its way into the loving heart of snowboard culture in 2011. Since then, LTC have nuzzled in deeper with their full Spring Break snowboard coverage at Park City last year and their free snowboard movie, dubbed Project LTC after the movie Project-X: a compilation of the previous season’s work, poking fun at frat-surfer culture, backed by the all-time finest house club mixes and featuring plenty of shirtless to buck-ass-nude shred excursions.
The group originated in Utah, including locals like Siebert, Taxwood and Bilodeau, but has made room in its furry underbelly for in- and out-of-state boarders. “It’s just whoever boards with us every day; it’s a big group of [10–20] people frothing out,” says cat licker Michael Wick. He’s talking about amateur- to pro-snowboarder friends like Evan Drage, Spencer Schubert, Blaze and Sage Kotsenburg, Nils Mindnich, Zander Blackmon and too many more to keep track of. “Yeah, everybody just kind of does their own thing, and then we all just come back together and froth out, and then everybody leaves, and then we all meet up [again]. We’re all always kind of together, [at least] a few of us,” says Wick.
That sort of networking is impressive, considering how much these dudes like to travel. Throughout any winter, the goal for every sponsored snowboarder is to at least get together enough usable video footage in order to make a three- to five-minute video part. Those who are lucky enough to have a budget from sponsors part ways from LTC and travel all over the U.S., Canada, Europe or Asia to search out and ride the most innovative and unknown urban features. Those stuck solely with their snowboard friends and gumption get to hunt for new adventure within as much territory as they can physically cover out of their own wallet—but that’s not even counting resort riding, special events or contests. The proud few will get invitations to places like the X-Games, where you’ll find Sage, or other events, like last year’s Holy Bowly contest in Japan, where Taxwood competed. “It was cool because I’d never been to Japan. I got to meet guys like Jamie Lynn, Wes Makepeace and just the best group of snowboarders to be around in general. I’d never experienced anything like it before,” says Taxwood.  As the summer creeps ever closer, showcase opportunities like The Launch, also known as the younger man’s Superpark, will come around. Add some more spoice, and then a majority of these gents make their way to Mt. Hood, Ore., working needed slots at summer snowboard camps like the famous Windells or High Cascade.