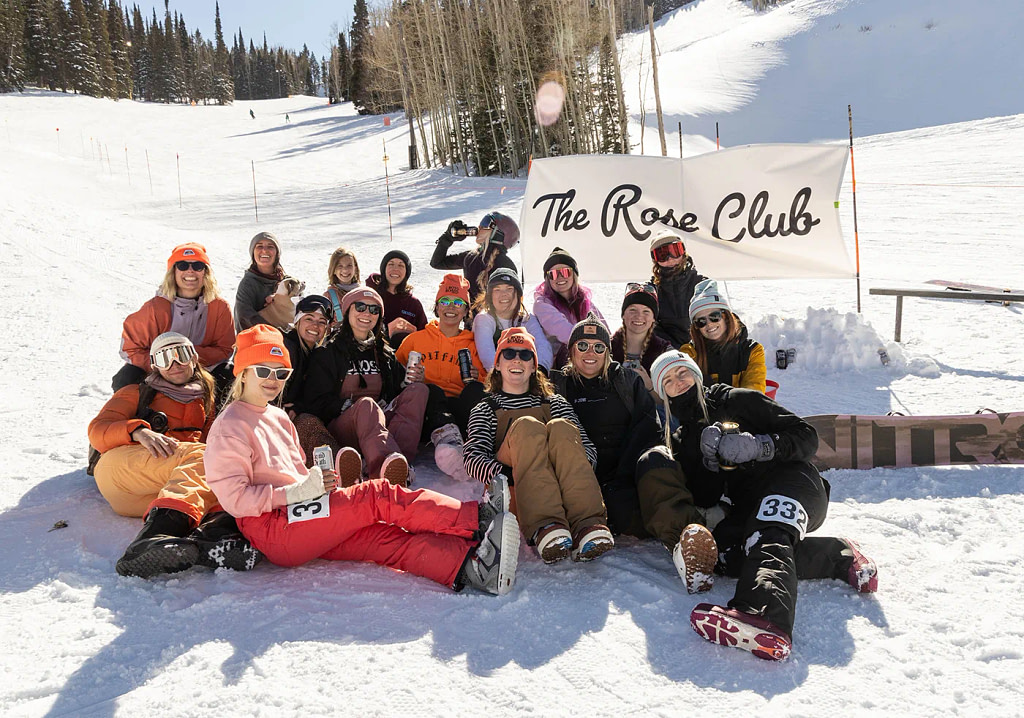 Whether it’s skateboarding or snowboarding, The Rose Club is actively working to foster a an empowering community of women on the basis of friendship and support.
Photo: Keisha Finai

A bluebird day with soft snow is arguably the best kind of day to go snowboarding. Throw in snowboarding with The Rose Club (TRC) and you might not ever leave the mountain. TRC has been around for almost two years, and while they are most known for fostering a safe and supportive environment for women getting into skateboarding, this season they are doing the same with snowboarding.

The Backyard Jam at Powder Mountain was a free event focusing on women’s progression and community-building, offering discounted lift tickets for those who wanted to ride before or after the event. While it was a competition, the focus wasn’t on winning—it was on building each other up.

The course featured a flat and rainbow rail at the top, a jump in the middle and hip at the bottom—the perfect setup to get a little sendy but also to learn new tricks. A park setup at Powder Mountain might sound out of place, and that’s because it is: Powder Mountain hasn’t had a park setup for several years, but to fully show their support of the event, they built the course overnight.

TRC initiated the competition with an emphasis on having fun and working together. In other words TRC encouraged giving each other pointers on new tricks rather than hording the secret recipe for yourself. And that’s exactly what happened: for an hour and a half, the riders were asking each other for tips on particular tricks, and there wasn’t a quiet moment when someone wasn’t hitting a rail or jump. All you could hear was cheering from the crowd, the tow rope and the gals at the top of the course.

Once the jam session ended and the judges were deliberating, the gals lined up and took turns hitting the hip at the bottom of the course to grab free product from mid-air. When the winners were announced, there were nothing but hugs, high-fives and cheers from everyone, and the event ended with free ‘za from Lucky Slice Pizza.

At this point, The Rose Club is a force to be reckoned with. When it comes to creating a safe space for women to get involved in the somewhat daunting action sports world, they’re the leaders in their class. Whether it’s skateboarding or snowboarding, TRC is actively working to foster a an empowering community of women on the basis of friendship and support.

For updates on The Rose Clubs next events, find them on Instagram @_theroseclub or visit www.the-rose-club.com.

Most Progression in One Day Award