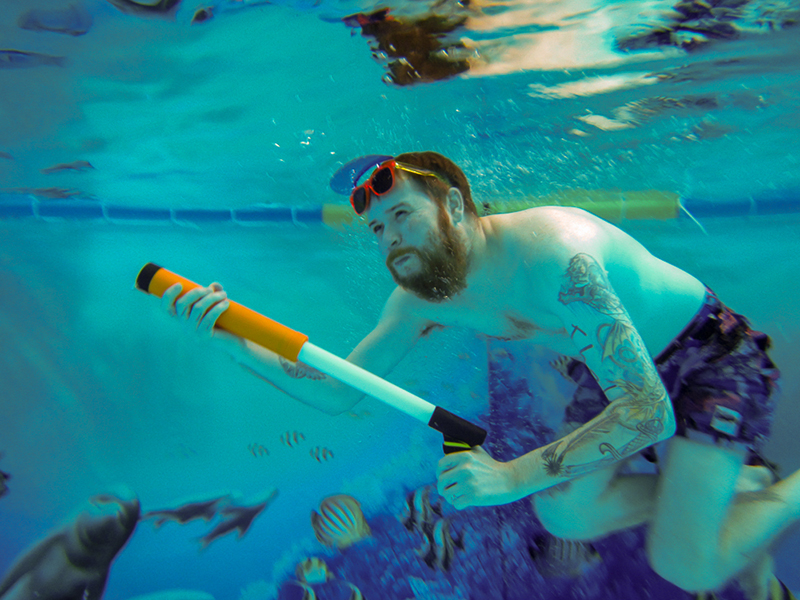 Ah, summertime! ’Tis the season where the nights get warmer and shorter. If you live in Utah, there’s so much shit you can do that you can’t or won’t always do during the three inferior seasons. Whatever you like to do is fine, nut for this article, I thought I would share with you warm readers what a lot of my friends and I like to do in the summertime.

Complaints aside, there are several ways to beat the heat. Here’re some things I do. First off, just sleep all day. Ask anyone who’s been a roommate of mine—I do this. Why? Because it’s cooler at night, dummy. Also, build a fort in your bedroom or living room or wherever the swamp cooler is and drape a sheet from the swamp cooler directly above your sleeping chambers—whether those chambers are your bed, a mattress and pillows on the floor, or just the floor. This is a great way to cool off, and building a kick-ass fort is fun and counts as a summertime activity if you do it in the summertime and incorporate a swamp cooler.

Another one of my favorite summertime activities is chillin’ out in the kitty pool. Real swimming takes too much energy, and I’m lazy. I like lounging in six inches of cool-cold backyard hose-water with my legs over the edge and sipping on some tall boys. Although, I don’t know why they are called kitty pools because I’ve never seen a cat use one. Most cats hate water—they should call them little-people pools, in my opinion. [Editor’s note: Yeah, we know.]

The other thing I like about kitty pools is that they are the Swiss Army knife of summer activities. You can utilize those things for way more than just lounging. Dump a couple bags of ice in that fucker, and you got a big-ass backyard beer chiller. And after you’re done lounging in it, you can throw a bunch of Jell-O pudding packets in there—and bam! Backyard pudding wrestling! That’s a tough one to top for summertime activity, and if you are having a backyard barbecue—another popular summertime activity—you just killed two birds with one stone by having awesome pudding wrestling for entertainment and then pudding for dessert!

I took a quick survey from a handful of friends to see what their favorite summertime activities are, which are basically some of mine. Let me blast through these real quick: Thirsty Thursdays at the Bees baseball games where, you guessed it, beer is cheep; midnight porch parties, Pie and Beer Day, demolition derbies, Pride Weekend, kicking it at the lake showing off the beach bod and a Utah summertime essential, Lagoon!

Did you know you can bring booze inside Lagoon? I didn’t know this until I was like 34. And I don’t mean just beer—as long as it’s not in glass, liquor is a go. Also, rumor has it that there will be a beer garden at Lagoon starting this summer! The whole amusement park feels like its being run by 14-year-olds, so the fact that you can get blitzed there amuses me. Waiting in those lines is so much more tolerable drunk and, honestly, not a bad way to sober up.

Between the crazy rollercoasters, spinning rides and the whole booze thing, it’s like they want you to barf. I can’t get the fantasy out of my head of riding the Colossus roller-coaster completely shit-faced, barfing while I’m upside-down at the apex of the first giant loop and seeing if my barf lands on someone else as the rollercoaster descends. That really would be one of the most epic barfs ever, but it probably should just remain a fantasy, or else they may ban booze, and that would be tragic.

The last summertime activity I’ll mention that is near and dear to me personally is complaining about the NBA offseason and having to wonder if the Jazz front office is going to fuck up on the trade deadline or not. Fortunately, our front office is pretty solid these days, but it’s still a consistent summer time activity in my life.

Now here are some tips I would like to share to help you enjoy your summer activities to the most maximum. Tip No. 1: Stay hydrated. My personal summertime ratio is for every six shots of Jim Beam, pound one large Gatorade. Tip No. 2: sunscreen. Maybe you don’t need SPF 50 or higher like I do, but that’s what I rock—sweat-proof and waterproof as well. My European heritage has rendered my skin complexion as pale as Casper the Friendly Ghost. Tip No. 3: DUI rates increase tremendously in the summertime because officers don’t like standing out in the snow, so stay safe on the roads.