For those pilgrims looking to wander a little off the beaten path (and willing to exercise patience for an appointment), Oni Tattoo has become a haven of quality art, laid-back atmosphere and dedicated needle-slingers who are in it for the love of the work. For owner Greg Christensen, all the difficult hours of running a business and maintaining his tattoo portfolio have seen reward: The shop celebrated its five-year anniversary in Dec.

The Accidental Triumph of Oni Tattoo: 5 Years of Slinging Ink 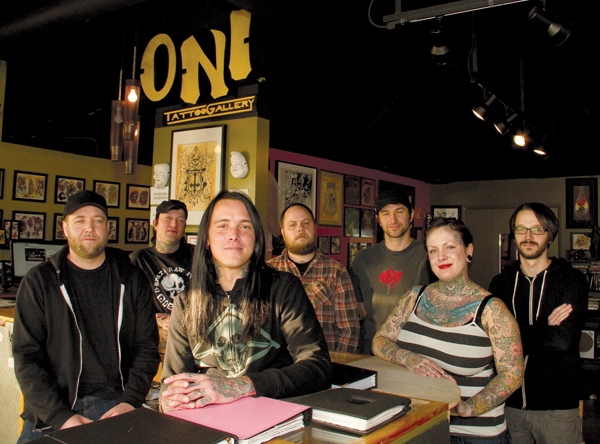 The Land of Zion may be lacking in some areas of rebellion, but certainly not when it comes to tattoo shops. Take one Friday night cruise down State Street north from 4500 South, and you will find no less than ten shops (at last count) willing to take your hard-earned cash and scrape some permanent art on your arm. But not all tattoo shops are created equal, and they are definitely not all on State Street. For those pilgrims looking to wander a little off the beaten path (and willing to exercise patience for an appointment), Oni Tattoo has become a haven of quality art, laid-back atmosphere and dedicated needle-slingers who are in it for the love of the work. For owner Greg Christensen, all the difficult hours of running a business and maintaining his tattoo portfolio have seen reward: The shop celebrated its five-year anniversary in Dec., a huge milestone for any small business, especially one as successful as Oni.

Located on 900 South and 325 East, stepping into Oni is like stepping into a well worn pair of Chuck Taylors: familiar, laid-back and comfortable. Over the addicting buzz of the tattoo machines, rock music is pumped into the cozy shop (but more like Red Fang than Slayer). The dark-toned walls are plastered with flash and beautiful, Asian-inspired artwork. With only a few private rooms, the shop is dominated by one public room where you can watch someone get inked while getting your own—a fantastic distraction for those who aren’t big on pain. Christensen is as much of a surprise as his shop: He’s tall, soft-spoken, professional and calm as a zen master. Surely running one of the most popular tattoo joints in Salt Lake is more stressful than this?

One thing Christensen has learned in his five years in the business: “Don’t grind yourself into the ground trying to make your business work. I’ve recently stepped back and only take one or two appointments a day, Monday through Friday. For the first three years, I was here five to six days a week, open to close. Now I just kick back and focus on tattooing, and the business runs itself. I could leave for a week and a half and come back and everything would be the same. I trust everyone here, and they trust me.”

Christensen’s cavalcade of incredible tattoo artists have created quite the family at Oni, and he insists this perfect balance of “not too many, not too few” on staff is part of the secret of his success. Current staff includes the legendary Sarah de Azevedo, Shane Barlow, Ryan Johnson, Clark Snyder and Jared Hayes. De Azevedo and Barlow approached Christensen wanting to work for him as soon as word of Oni’s opening came, and Hayes joined the crew after Oni merged with Apparition Ink last January. Christensen plans to hire maybe one more artist, but that’s the limit. “You don’t want too many artists in one shop. It makes it cut-throat. The right amount makes the perfect balance that there’s enough work to stay busy without feeling like other artists are stealing out of each other’s pockets.”

“Cut-throat” is a description used a lot here in Salt Lake, from the music scene to the tattoo scene, and Oni’s opening was not free from this drama. “We’re friends with a lot of studios, but there are a lot of studios that just don’t like when other shops open up. Other cities like Philly or New York, certain artists will go work at other shops across town and then go back to their original studios. Salt Lake just has a weird competitive vibe,” says Christensen. But Christensen insists this roadblock—and the drawback of not being one of the State Street squad—has done nothing to inhibit his business, even in the dawning months. “The first month of business actually went pretty smoothly. There was a lot of sitting around, but only because there was a lot of clientele still trying to find us. Once everyone found us, we were set. By February of the following year, everyone was booked out at least six weeks.”

Christensen’s inspiration for opening his own shop, he says, wasn’t actually to run a successful tattoo studio—his original idea for Oni was to cater to his friends. Christensen has been tattooing for 12 years, starting in high school, when his friendship with “skinheads and punk rockers” motivated him to build his own tattoo machine, like MacGuyver from Hell, out of found parts like guitar strings and a square battery. After a dead-end job as a restaurant manager, Christensen bought a mail-order tattooing kit, began doing his own work from his home, and soon found himself under the apprenticeship of Bonnie Seeley of Quicksand Tattoo. His favorite art to do? “Anything with blood and skulls,” he says. When he took out a second mortgage five years ago to re-do his kitchen, like any reasonable person, Christensen decided to use some of the funds to open a tattoo studio for his buddies. But he had no intentions of being a successful (or otherwise) business owner. “We all used to work together at another place, and once they heard I was opening my own studio, they approached me to ask if they could work for me. I didn’t approach anyone to work here. It all just sort of fell together.”

Now five years later, things are a lot different than he imagined: He is a businessman and a big commercial success. Even culturally, tattoos have made an unexpected leap into mainstream with reality shows like LA Ink and Miami Ink showcasing “real life” in an upscale tattoo joint. From an outsider’s perspective, this exposure follows the ol’ P.T. Barnum “There’s no such thing as bad publicity” school of thought, and may push fence-sitters to finally pick up their balls and get under the needle. Christensen says the shows have certainly contributed more business, but like all good things, it has come with a catch. “People come in and want a portrait done in half an hour and want to pay $60 bucks for it. We’ve had to turn people away before who come in with $100 in their pocket and they want this massive tattoo and want it done in one sitting. I wish the reality shows would show exactly how long the tattoo took and how much it costs. But I don’t mind them, I watch them to make myself feel better. At least my business doesn’t run like that,” says Christensen.

Christensen isn’t running himself to death with all the behind-the-scenes work of a business owner, the shop has smoothed out its day-to-day operations, and everyone has done a lot of growing. While he has no giant business plans for the next five years, Christensen and Oni will continue to participate in the Salt Lake City Tattoo Convention, and maybe hire another artist for their unique and successful staff.

He may not have been planning to be such a smashing success, and he’s happy with where Oni has landed, but is there any one lesson Christensen wishes he could go back in time five years ago and tell himself? “Don’t do it,” he says with a laugh. “Nah, nothing. I think everything went great.”