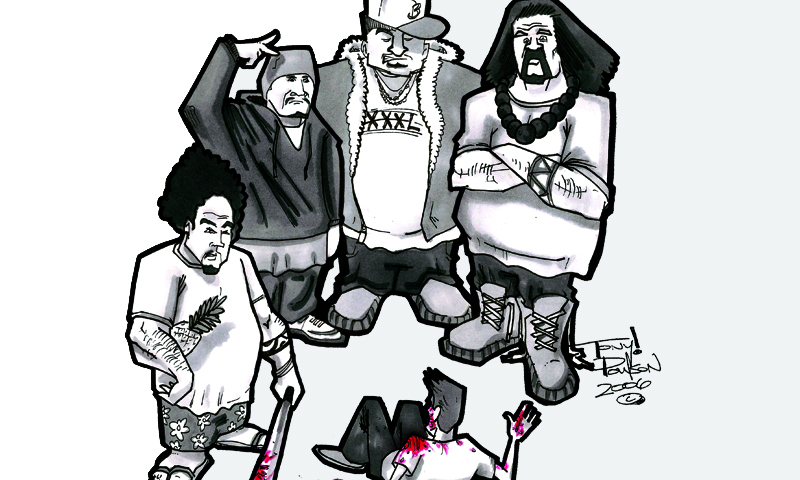 The Drugs Made Me Do It

Man, I love writing and hearing stories about drug abuse. Especially LSD. Acid is such a silly drug to me. It’s like a kidney stone – so tiny, yet it can fuck you up so bad. I’m not even sure if the cool kids at the high school still drop, but when I roamed the halls in the early 90s, it sure was the cool thing to do. Turn your Discman up real loud and tuck it into your flannel, take a couple hits of triple-dipped blue shield before third period, and just ignore the fuck out of your auto-shop teacher.

I don’t even know if it’s possible to buy acid anymore. I’m sure you can. I just haven’t tried. I never really liked psychedelics that much, anyway. I did acid once in high school and it kind of scared the shit out of me.

The last time I ate magic mushrooms was at the last Lord of the Rings midnight madness premier. I panicked halfway through the magical journey and had to make it out of Mordor via Ute Cab. I remember my buddy Joe was the only one not booming and he came outside to smoke a cig with me. Joe was drunk as shit and we saw three Nazis walk by us, but I thought they were Orks. Joe said, “Check it out! Nazis!” right within earshot of the kooks, and I just flipped out. Joe calmed me down by saying, “Don’t worry; I can take em!”

Anyway, I remember the day I really became afraid of LSD and decided to never do it again. It was the day that one of my buddies took some bad acid, did some crystal meth and freaked out. At the time, it was pretty serious, but like lots of serious things in life, now it’s just a funny story. Allow me to share.

I can’t remember if I was in tenth or eleventh grade, because I did do a lot of drugs back then, but anyway, there was going to be a party at some kid’s house whose parents where out of town. This was kind of a big deal for us back then; we spent so much time getting wasted in different alley ways and empty parking lots that to actually party in a real house was always exciting and kind of a treat. I can’t remember whose house it was, but I remember the kid being a nerd. That didn’t matter though; we just needed a place to party.

What I do remember is getting beat up (not too bad) by my friend who had taken the bad acid. The party was going along pretty well until my friend Ed (not his real name) showed up with some gangster kids. Ed was a skater but back then, it was okay for the skaters and gangsters to hang out because we both liked drugs and shared a lot of the same remedial classes at school.

Three of these gangster kids where Tongan and pretty big. Which will become pertinent to the story later on. Ed was white. Ed was a pretty tough kid, but not a very good fighter. He had kind of a temper, but for the most part, he was real nice.

Anyway, Ed and these gangster kids did some crystal meth, took some bad acid and showed up to this party. Acid takes a little while to kick in, so everything was cool for about an hour or so. Then for some reason, Ed, who was a lot bigger than me, shoved the shit out of me for no reason and I went flying into the wall. It was clear that something was bothering Ed, but at this point no one knew what it was.

One of the Tongan gangster kids helped me up and asked me if this was my house. I told him no, and then he said, “Yeah, cause if someone disrespected me like that in my house, I’d fuck them up!”

Then Ed started shit with some of his other friends at the party. A little later, he slammed my head into a wall and punched me in the gut. Then he kicked my friend Gomer in the nuts. We were starting to get worried. Ed was clearly out of control at this point.

Then one of the gangster kids decided to regulate. He told Ed, “Chill the FUCK out, man!”

Ed replied angrily with a sentence that included the big N word. The one that white people shouldn’t say. Escpecially to Tongan gangster kids. So the gangster kid did us all a favor by beating the shit out of Ed in front of us.

Ed calmed down for a couple minutes after his beat-down, but then he started acting up again. So a different gangster kid beat him up. This happened about three times, with a grand finale beat-down on the front lawn of the nerd’s house by like five or six gangster kids.

Ed had gotten the shit beat out of him like six times in a row, but he wasn’t done. I was never much of a fighter, so while Ed was unconscious, me and another kid went over and peed on him. Then the cops came.

We ran off and hid in some bushes and watched the cops arrest Ed, but he was still fucked up. So the cops beat him up. Then an ambulance came. When Ed got out of the hospital, he apologized to everyone and we all became friends again.