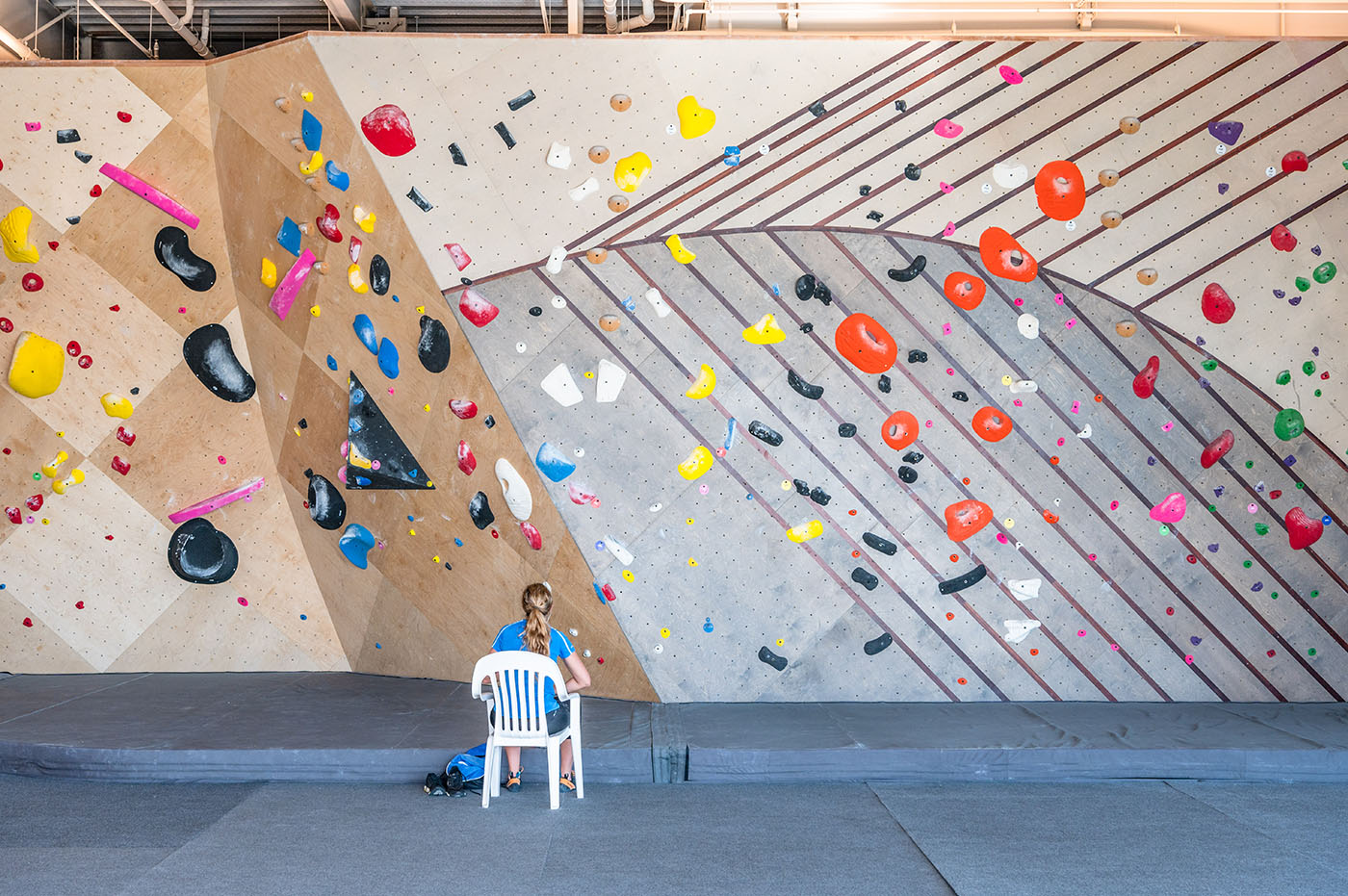 The Front Climbing Club Expands With a New “Community Hub”

It feels like an oversimplification to plainly label The Front Climbing Club’s facilities as “climbing gyms.” Sure, a handful of members or day users stop by just to bust out a solitary workout and leave, but for most, an experience at the Front seems to be about much more than climbing.

In the Spring of 2020, the newest iteration of The Front opened its doors on South Main, right where Millcreek bumps into Interstate 15. The building, with its boxy footprint and elegant glass siding, dominates its block. As it sits, the facility towers over a surrounding region that is mostly occupied by humble single story mechanic garages and vacant lots. The statuesque climbing castle stands as a precursor of development to come in this construction-laden neighborhood. Those who are familiar with the brand’s other locations in Ogden and just south of Downtown Salt Lake will recognize a brand pattern of design elements within the new 50,000-sq. foot “gym.” It’s immensely spacious, uncommonly tidy and cozy enough to spend half your day there without ever planning to.

Marketing Director Tommy Chandler aptly describes The Front as a “community hub.” During a recent visit to the South Main location with this phrase in mind, I roamed throughout the building’s three floors and climbing areas and found myself constantly surrounded with lively social interaction. As Chandler explains, “we evolved as a community center and meeting place early on, and we have continued to build upon that.” Even in the midst of COVID-19, when capacity is limited and people are asked to wear masks (except while climbing) and maintain distance in the gym, there is a discernible air of kinship throughout.

“Natural light and pleasant, conversational chatter fill the massive space with a certain warmth that has the makings of a proper community nucleus.”

The new building’s internal layout undoubtedly contributes to this. A huge open floor on the ground level allows groups of climbers to feel like they’re all sharing the same public space. The upper floors wrap around the perimeter as a round footpath, encircling the towering, 60-foot climbing walls that rise up through the center. It’s all very inviting—natural light and pleasant, conversational chatter fill the massive space with a certain warmth that has the makings of a proper community nucleus.

While climbing is undoubtedly the main event, Chandler insists The Front strives to maintain a broader identity. Though it hasn’t been heavily advertised in the months since the South Main location opened, The Front’s downtown location hosts a Wednesday night live music series. “We have local beer, a couple Traeger grills, live music and makers that come into the courtyard to share and sell their creations,” says Chandler. The original location near Downtown features an in-house taco shop, and the new gym will eventually contain a restaurant of its own, as well as a rooftop bar. Alongside these communal events and gathering spaces, the Front also offers amenities such as yoga, personal training, a community-supported agriculture program and jiu-jitsu.

“Climbing brings us all together, but music, art and causes are all a part of the brand.”

Some of the events that The Front hosts are designed to fund their Impact Coalition, a matching program that supports local non-profits. Among these are Community Animal Welfare Society, Utah Clean Energy, Volunteers of America and the Salt Lake Climber’s Alliance. “This is what The Front is really all about,” says Chandler. “Climbing brings us all together, but music and art and community and causes are all a part of the brand.”

Climbing, both in gyms and outdoors on rock, is currently experiencing an enormous surge in popularity. Almost every major city in the country now sports at least one large-scale climbing gym, and some, like Salt Lake City, are home to three of them. From a marketing perspective, Chandler chalks this boom up to social media, and the resulting urge to participate in attractive activities that are often featured online. “Before, you had to read Outside or Climbing Magazine, but now with Instagram and #vanlife, many people are finding climbing.” This trend has left Chandler with a strong faith in the viability of investing in new gyms. “I think the model has been proven: If you build a climbing gym, people will show up.”

Perhaps the largest demographic of new climbers driving this upturn is the youth sector. Once upon a time, learning to climb required an experienced mentor willing to literally “show you the ropes” at an actual cliff. Now, in the relatively controlled setting of the climbing gym, flocks of kids are finding their way into the sport through after-school programs and competitions. In the youth programming category, The Front is stacked with various camps, teams and other offerings. The competitive youth squad is divided into three separate tiers of proficiency. Certain summer camps are partnered with other organizations in order to provide well-rounded experiences that explore the overlaps between climbing and other fields. One of these camps delves into photography and videography, while another focuses on nesting birds and raptors with the help of HawkWatch.

With an extensive list of services provided, the “community hub” label surely suits The Front Climbing Club. A “climbing gym” is a dusty and cramped cavern where climbers go with a singular purpose, and The Front does not resemble this. Instead, the brand beckons its congregation with three homey mixed-use facilities: Come for the climbing, stay for the community.