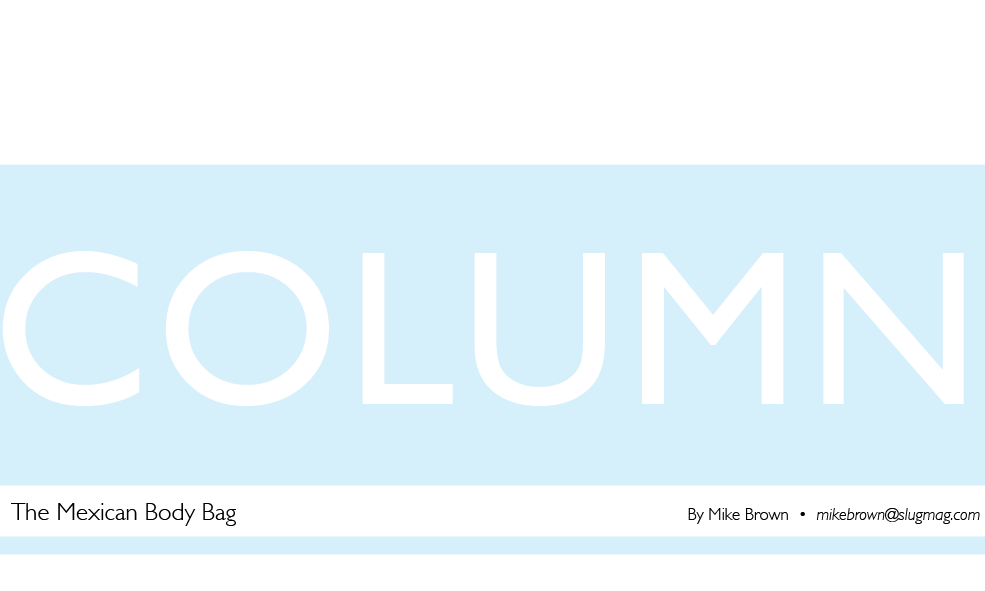 Since the Jazz are going to make the playoffs this month, I thought it would be a great idea to write about one of my favorite things in the world, the Utah Jazz. And since this is SLUG and it’s probably not ‘cool’ to like sports, I’ll keep the stats to a minimal so you won’t get your tight pants all bunched up. Instead, I’ll tell you a story about what happened to a friend and I in the bathroom of the upper bowl in the ES Arena, formally the Delta Center.

One of my friends who is Mexican and sells skateboards for a living out of California came to Utah to visit some of his accounts and butter up the local skateboard retailers so we’d buy more shit from him. Part of this buttering up process was taking us to the Lakers/Jazz game and getting us drunk.

There were ten of us that night, three of which were of Spanish decent. By half time we were all fairly wasted and in good spirits. As I recall it was a close game, which was impressive seeing how this was when the Lakers didn’t completely suck because they still had Shaq and Kobe hadn’t butt-raped anyone yet.

At half time, my buddy Benny (who happens to be a Spaniard) and I rushed to the bathroom to take pisses. Benny is somewhat short in stature and while we were waiting in line some douche bag started talking shit to us for no apparent reason.

This guy had a really bad haircut. The bottom half of his head was shaved and the top half was bleach-blonde, rock hard spikes. Terrible. He was clearly intoxicated and on top of all this he was wearing a Lakers t-shirt. I don’t know why he was talking shit. Benny tried to down play the situation and avoid conflict by offering the guy his spot in the piss line. I even recall Benny referring to this guy as “friend,” but the douche bag wasn’t having it.

Do you ever have those little moments in life that are like being in a movie with a great script? This was defiantly one of those moments you could almost hear the record scratching as the bathroom went silent. What happened next was one of the coolest things that I’ve ever seen.

Keep in mind that this big blonde douche towered over Benny. Immediately after he said that he was going to send Benny back to Mexico via body bag, one of the biggest Mexicans that I’ve ever seen happened to be washing his hands. Without turning around to see whose mouth the offensive comment had come from he said, “Your going to send WHO back to Mexico in a body bag?”

Never in my life have I seen anyone go from being such a bully, to such a pussy, in such a short amount of time. The very large Mexican, decorated in scary looking neck tattoos, walked up to the douche and asked, “Why don’t you try to send me back to Mexico in a body bag?”

The douche was quick to apologize but to no avail. He said, “I didn’t mean to offend you!” Obviously.

The great big Mexican then said, “You offended everyone in this bathroom!” Well put!

Benny and I quickly pissed and thanked the big Mexican by buying him a beer. Then things got funnier. The douche came up to the big Mexican with his girlfriend, thinking he wouldn’t get his ass beat in front of his old lady, trying to justify why he would make such a statement. The big Mexican still wasn’t having any of it. The cops even had to come over and ask if everything was alright. Things broke up for the moment.

Meanwhile, our crew was taunting him and making fun of his haircut. The douche was on his cell phone clearly trying to round up a posse or a getaway route. He disappeared mid-way through the third quarter. I can’t really remember if the Mexicans went after him but I hope they did.

My Mexican skateboard-selling friend out of California thought the whole thing was particularly funny, which it was. I think the incident would make a great after school special show on Jazz game etiquette.

And to make the night a complete blurry success, the Jazz won that game.