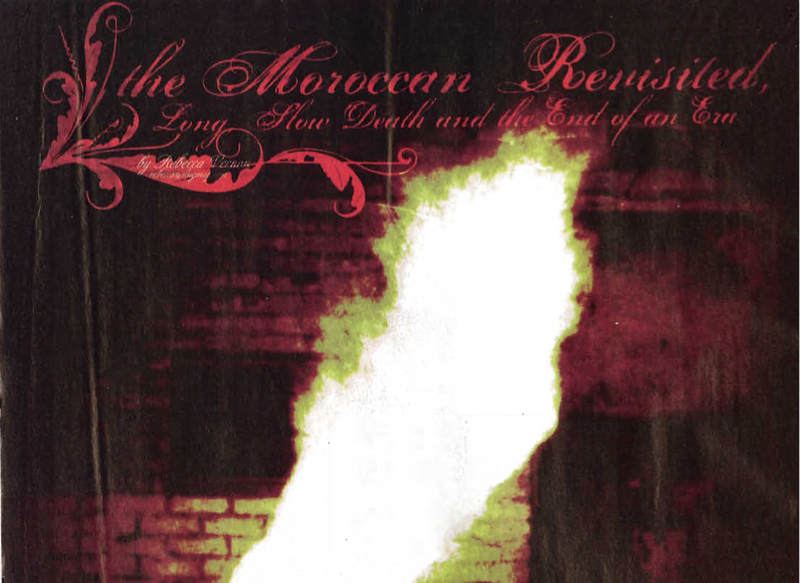 The Moroccan Revisited: Long, Slow Death and the End of an Era

Scenes thrive around a center, be it a band, label or venue. Salt Lake venues have long been the catalysts fueling the city’s fire. One of Salt Lake’s greatest, most influential and most unknown venues of the not-too-distant past was the Moroccan, and barely anyone under the age of 24 here knows about it. The Moroccan began as a practice space in 1996, transformed into a thriving, illegal all-ages venue in the late 90s, then back into a practice and recording space until recently. Now, the Moroccan has finally closed its doors forever, and its closing marks the end of an era.The Moroccan is hard to find, even with an exact street address. It’s down the narrow alley and behind Guthrie Bikes in downtown Salt Lake, in a dirty, nondescript gray building. The only thing out of the ordinary is the Arabic writing above the metal door.

Inside, under the 30-foot-high skylight and overhead fan, there is a loft area, decrepit stage, scuffed cement floor and the Moroccan’s trademark, several pre-2005 curlicue wood cutouts decorating the space above the stage.

“I think a space retains the energy of the events that took place there,” says Dan Thomas, drummer for Tolchock Trio, Red Bennies, The Breaks and Smashy Smashy. “As soon as you walk into the Moroccan, you immediately get the sense that, ‘Wow, here is a place with a history;’ that a lot of interesting, momentous, creative things happened there.”

“When you were inside, you didn’t know what city you were in, and that’s how we wanted it,” says Riley Fogg, head of Ether, an experimental noise band that started in the mid-90s, and current leader of Ether Orchestra. Fogg was the Moroccan’s leaseholder for almost 10 years. “It was something exotic in a city that was bland. The place itself was an event.”

“I was in Salt Lake for a visit, and stopped by the Moroccan for a show,” says Thomas. “It turns out we had mixed up the nights of the show, but I heard this band practicing there that blew my mind. To find a band with that level of quality, musical knowledge and passion from Salt Lake made me see the city in a different light, like there was this whole underground, secret thing going on that no one knew about. I later found out that was Ether.”

“Ether wasn’t like a band; they were an event,” says Derek Fonnesback, longtime business manager of the band and the Moroccan, and then store manager of the U or U location of Graywhale CD Exchange. Derek currently produces Form of Rocket material. “There were always at least two firebreathers, different costumes and themes at every show and film projectors. Ether stood by the ‘art first, entertainment later’ ethos.”

Ether opened for Fugazi at Bricks and released their third album, Music for Air Raids, on Extreme Records in Australia.

James Acton, Ether’s drummer and future drummer for Ether Orchestra, was a waiter at Cedars of Lebanon and asked to rent the Moroccan from his boss Raffi Daghlian, owner of the buildings behind the restaurant. Once used to house Daghlian’s rug-cleaning business, Ether gutted the space and transformed it into a practice space and community art co-op.

“We wanted a place where we had the freedom to do whatever,” says Fogg. “Experimental art, performance, music. We started out doing some parties and private shows, and it evolved into an underground all-ages venue.”

When the Moroccan began, the last unofficial, illegal all-ages venue, the Hate House [Appropriately named after the late 80s local band Hate X9], had closed due to constant police harassment.

Ether played the Hate House’s last show, one of their “famous naked shows.” I ask Derek if the police were pissed upon finding the members of Ether performing in the nude.
“I think they weren’t too happy,” says Derek.

There finally became nowhere to go for under-agers to hang out.

“The Moroccan venue was our attempt to create an alternative nightlife scene,” says Fonnesbeck. At first, there were efforts to make every show at the Moroccan something special, rare … and secret. The address never appeared on any flyers. Fonnesbeck and Fogg were determined to avoid the mistakes that had shut down the Hate House. There were less shows at the Moroccan in order to avoid attracting police attention, whose headquarters were a block away, and to keep the quality of the shows high.

Anyone was welcome at the Moroccan, but you had to be in the know, which cut down on crowd size. Staying behind the Guthrie and Cedars building protected the venue from prying eyes. The first two years, the efforts worked. The police didn’t have a clue what was going on.

Bob Moss played the Moroccan’s first show on June 15, 1996. Other memorable shows at the Moroccan before 2000 were The Locust, Dub Narcotic, the Bindlestiff Family Circus , The Tight Bros from Way Back When and an International Film Festival. Scott Jenerik, a San Francisco noise artist, sent noise bands from the West Coast to Salt Lake. But the pinnacle for the Moroccan was its Dirty Three/Low show, thanks to Riley’s friendship with Low’s guitarist/vocalist Alan Sparhawk. Fogg and Fonnesbeck promoted the hell out of it and 150 people showed up.

“My favorite event that happened at the Moroccan,” says Fogg, “was when one of the members of a band asked if the Moroccan’s bathroom door was the door to the stage. He thought the Moroccan was the backstage area. They then refused to play the show.”

Many local musicians began or evolved at the Moroccan. Puri–Do, In Gowan Ring and Ursula Tree played there, along with the Red Bennies, Power of Means, Birdman, Tarn, Violet Run, The Wolfs and countless others.

Then there are all the Moroccan recordings: Red Bennies, Chinese Stars, Stiletto, The Knives, Vile Blue Shades, Shelter, The Wolfs, The Kill, Clear, Le Force, Ether, Beard of Solitude, Elsewhere, Books About UFO’s, among many others, recorded there. Andy Patterson, Judd Powell, Jeremy Smith, and Dave Payne all produced bands there. Many people even lived in the Moroccan thoughout its’ lifespan, however, was not recommended.

In 1998, the Moroccan started renting out the space to local promoters to subsidize rent cost. Alana Kindness booked tons of shows there, as did Tyler Froburn and others. The amount of shows increased and brought in outside crowds that “weren’t always sensitive to the dangers of running an underground venue,” says Payne. “In other words, more people equals disaster.” The Moroccan soon fell prey to the very problems that Riley and Fonnesbeck had wanted to avoid. The police wised up and soon, the venue was shut down.

In 2000 the Moroccan reverted to its roots; becoming a full-time band practice and recording space for multiple bands, with occasional private parties.

Fogg stepped down from landlord duties in late 2004 due to burnout and financial strain. Jeremy Smith and Dan Thomas took over the month-to-month lease, intending to turn the Moroccan into a professional recording studio/record label (Ex-Umbrella)/booking agency combo. Unfortunately, Daghlian finally brought in tenants to occupy apartments neighboring the Moroccan, and noise rapidly became an issue.

Daghlian told Smith and Thomas last March that they were going to have to leave. Smith and Thomas told him they would invest money into extensive soundproofing. Together with Oliver Lewis of Tolchock Trio, they installed two surfaces of dry wall with a third, floating vinyl wall wedged in between. Smith continued to record bands for an income until the soundproofing could be finished, which created temporary noise in a tenant’s apartment.

Thomas and Smith tried to contact the tenant directly to reassure her that the soundproofing would be completed soon, but she didn’t respond and complained to Daghlian, who finally gave Smith and Thomas 30 days’ notice in June.

Thomas and Lewis spent roughly $1500 on soundproofing and other modifications and hours of labor installing the drywall.

“To Daghlian’s credit, he let us have the final month free,” said Thomas, the equivalent of about $425.

Fogg states he had never had a problem with Daghlian. “As long as you gave him the money for the space, he left you alone,” says Fogg.

“I’m sorry to see those musicians go,” says Daghlian. “I enjoyed having them here. I didn’t mind the parties or the noise or the shows. It’s just that, now, I have tenants.”

“Because we weren’t on a lease, I told him we’d invest our personal money into making improvements,” says Dan. “I can’t help wondering if he intended to take it away from us all along; But maybe he genuinely wanted to give us a chance.”

“I really wanted it to work out,” says Daghlian. “It’s just that their soundproofing wasn’t good enough. It helped a little, but not enough.”

I ask Daghlian if he had known they weren’t finished with the soundproofing yet.

“Maybe they weren’t completely finished, but they still had put up an entire wall. There wasn’t much else to cover,” says Daghlian.

“There were still a few vital holes that we needed to cover that were still letting a lot of sound escape,” says Thomas. “If we’d only had a chance to finish, it would have made a huge difference. We were even thinking of putting up a third layer of drywall and a second floating wall if that didn’t work.

“We are really, really bummed,” says Thomas. “Not about the money lost, but about the fact that we are losing the Moroccan. It has played such a huge, historical part in this city’s scene and it is a shame to let it go.”

Smith, still feeling down about the situation, declined to talk about it in an interview.

“I think the Moroccan has been dying a long, slow death for years,” says Riley. “I went down to check on the space recently, and when I saw the curlicues stacked outside the door, I thought, that’s the end.”

“My attitude of enjoyment, awe and excitement towards the Moroccan turned to frustration and disgust when I started being the subletter,” says Payne, who was the primary rent-gatherer for Fogg during the last few years. “It got really hot in the summer and really cold in the winter. I was afraid of getting stuff stolen. People fought all the time over scheduling. The Moroccan was a nightmare on every rung of the ladder all the way to Raffi. The people that played there were scumbags, including me, until I turned from a scumbag to resource management.

“But it was a great place to record, the sound was fantastic, and the door led straight to the cars … you only had to carry your amp 20 feet.”

“There has to be a nucleus,” says Fonnesbeck. “A place. The scene has really flourished as a result of the Moroccan. There was so much cultural oppression before the Moroccan formed that kids could not get together to create something legally. So when they did gather, it made it that much more powerful.”

With the commercialization of underground culture, what was once shunned is accepted, and what was once dangerous and illegal, run by kids for kids in Lord of the Flies fashion, has been made safe, not just in this city but in all cities. Underground music has thrived as it has become more mainstream, but the mystery and intrigue of venues like the Moroccan have become a thing of the past. !