SLUG Mag Soundwaves
Episode #404 – Endless Struggle
00:00 / 14:25
Spotify Stitcher
RSS Feed
Share
Link
Embed
Drinking delicious, locally made beer has become a no-brainer. With so much to choose from, even here behind the Zion Curtain, the consumer’s cup literally runneth over in a marketplace full of options. However, the standard styles—pilsner, stout, amber ale and hefeweizen to name a few—are no longer enough. Increasingly, brewers all over the world are pushing the envelope of what is considered normal for beer, and the results are as tasty as they are groundbreaking.

The Odd Beer Out 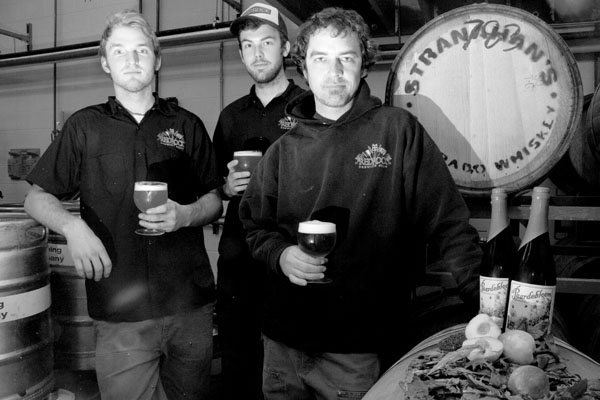 Drinking delicious, locally made beer has become a no-brainer. With so much to choose from, even here behind the Zion Curtain, the consumer’s cup literally runneth over in a marketplace full of options. However, the standard styles—pilsner, stout, amber ale and hefeweizen to name a few—are no longer enough. Increasingly, brewers all over the world are pushing the envelope of what is considered normal for beer, and the results are as tasty as they are groundbreaking. The basic ingredients of beer seem simple: Water, malted barley, hops and yeast come together to make your favorite refreshing pint.  The real art comes in the subtle manipulation of that formula to yield novel results. Spices, fruit, herbs, wood barrels, wild yeast, bacteria, raw grains and more can all be used to complicate the recipe and turn the average ale into something extraordinary. For beer nerds everywhere, the holy grail is that intangibly wonderful synthesis of flavors that are both completely new and somehow familiar. After all, it’s beer!

Utahns are no slouches when it comes to innovation.  We have some of the most creative personalities in the industry, churning out unique offerings and doing our best to give beer drinkers something they may not have tasted before. In March, Jenny Talley of Squatters became the first woman to take home the Russel Schehrer Award for Innovation in Brewing from the Craft Brewing Conference in San Francisco. “It floored me,” says Talley of the honor.  She certainly deserves it—her stable of unique, internationally influenced beers released over the last few years include sour saisons, oak-aged Belgians, coffee stouts and herb beers as well as the recent addition of a double Mexican-style lager. When asked where the inspiration for these projects comes from, she’s down to earth: “My own selfish need for tasty beers that I want to drink—the same place as a homebrewer.”  But that can lead anywhere.  “Start with a story,” says Talley. “[Squatters founder] Peter Cole vacations in New Zealand and brought the manuka beer home for me.”  She’s talking about her recent release of the Captain Cooker, a beer bittered with a type of tea tree native to New Zealand and Australia, and based on an old recipe made famous by the explorer Captain James Cook.  “I didn’t want any hops—I wanted manuka to have the platform,” says Talley. The beer is herbal, with hints of mint and citrus, but with a solid backbone of familiar malt.  There are plenty of other ideas coming all the time.  “The jasmine trees [near the pub] bloom every spring, and they are gorgeous,” she says. “I would love to integrate jasmine into a beer—a witbier or wheat beer.  I’m inspired by a walk to my car.”

Other local brewers find even more sources that start their synapses firing up the mental kettle.  History inspires Donovan Steele of Hopper’s Grill and Brewing Company in Midvale, so he hits the books. “Styles have limited brewers,” he says. “Modern American brewers want to put everything in categories. I like extinct styles and a more rustic, farmhouse approach to brewing.”  Since beginning to release high-point bottled beers that he can sell out of the brewery doors, Steele has been producing award-winning Utah firsts, including his Double Black Lager and This Is the Pilsner.  It’s his more unusual biere de garde and the recently released Irish strong ale that are getting the critics salivating, though. “I was asked to do a bottled version of my Irish ale, but I wanted to make it strong,” he says. Steele didn’t want to make a stout, though, and instead used grains he had on hand to create something with malty complexity—the Hot Headed Red, a truly new and unique beer.  Steele used raw oats and rye malt and produced an 8 percent ABV beer that is as rich as it is smooth.  It may not have the instant allure of a flashy ingredient like chocolate, raspberries or pumpkin, but this is certainly one of the most interesting drinking experiences of the year—and he’s just getting started. “I like to have one element that’s out of style,” says Steele. “I have a new saison with raw grains coming out that was dryhopped with tons of citra.”  The use of citra, a strong, citrus-y American hop, is completely out of character for a traditional French saison, but the blend of techniques will undoubtedly produce something worth the experiment.  Look for that and more from Hoppers and Steele in the near future.

Kevin Templin of RedRock Brewing Company has been working with Chris McCombs of Colorado’s New Belgium Brewing, makers of Fat Tire, to produce a unique Belgian-influenced beer for a few years now.  During the hop shortage of 2008, Templin says he thought, “I’ll bitter my beer with something else.”  That something else was the leaf of the common dandelion, a traditional but rare ingredient from European beer history.  The collaboration went on to include wild yeasts, provided by New Belgium, and fruit. Both brewers have made similar batches and are on the fourth version.  “We’ve used juice or extract before,” says Templin. “This year, I just said ‘fuck it’ and got 45 pounds of fresh organic peaches—they really give a fresh orchard flavor.”  The resulting beer is called Paardebloem, Flemish for dandelion, and has an aroma worthy of its pedigree. Stonefruit, warmth from the high alcohol and rich barnyardy complexity from the Belgian yeast all mix together in the flavor as well. This year’s version will continue to mature as it was dosed with wild brettanomyces at bottling time.  Over years, it will develop sourness and even further complexity as the living ingredients continue to work in the bottle. “My German beers, I’m pretty regimental about,” says Templin. “The art of Belgian brewing—it’s got no walls.” No matter what his approach to any particular style, his view of the process as a whole doesn’t change. “Everything about brewing is an art,” he says. “Cleaning a tank, making your lunch the night before, drinking the right coffee in the morning—all part of it.” Collaboration seems to be a muse for Templin as he says a rye doppelbock lagered in High West whiskey casks should be on the horizon.

Barrel aging is only the beginning for Kevin Crompton, head brewer at Salt Lake’s newcomer Epic Brewing Company. “I probably have more creative freedom than any brewer in the United States,” he says of his extensive and diverse product line that includes smoked Belgian beers, a brown rice ale and a brand new lager hopped like an American IPA.   What brings out all this creativity for this veteran of Utah’s brewing scene? “The fact that nobody else is doing it,” says Crompton. “American craft brewing is creating styles, fusion, categories and subcategories.”  Take perhaps Epic’s most unusual beer, the Sour Apple Saison. “I tried to emulate a Belgian beer,” he says.  “More of a cyser [think cider and mead blended] with spice.  [I wanted] the flavor of green apple in a strong saison with spice from the yeast.  There was no such thing before we were making it.” Instead of moving backward from a concept, Crompton builds his beers from the bottom up.  “The very best base malt, then some specialty malts, then hops and yeast.  My production background makes me think that way,” he says.  Sour Apple Saison starts with high-quality grain, then gets a massive dose of raw local apple cider pressed at Red Barn Cider Mill in Santaquin.  Finishing the brew involves using spices that include coriander, ginger, grains of paradise and others and then adding traditional French saison yeast to pull all the flavors together.  The beer is dry and tart, with hints of fruit and a rich, spicy aroma.  “Using spice without it being overwhelming” is one of Crompton’s favorite aspects of brewing, he says. Share this popular favorite from Epic with a friend this summer when it starts to get really hot, and savor the creativity.

All these brewers have their favorite ingredients and techniques. For Talley, bacterial spoilers like lactobacillus, pediococus and the king of wild yeasts, brettanomyces reign supreme, but still, “I absolutely love working with orange peel and coriander,” she says. Steele loves to use yeast. “Odd yeast or yeast blends where I get character from both strains, as well as raw grains,” he says are some of his favorites. Templin is all about the wood, while Crompton revels in the use of herbs, fruit and spices.  What unites these brewers is their sense of exploration and their curiosity.  As long as we keep drinking these beers, we can expect these artful brewers to keep producing them with almost infinite variation. “There’s no end to what you can make out of beer,” says Templin. Here’s to going out and tasting something completely unique, right here in Utah.  Cheers!