In Processed, Call’s work uses collage, digital media, painting and found objects to manifest new ways of exploring the fast food industry, consumerism and our perceptions of art and the world around us. 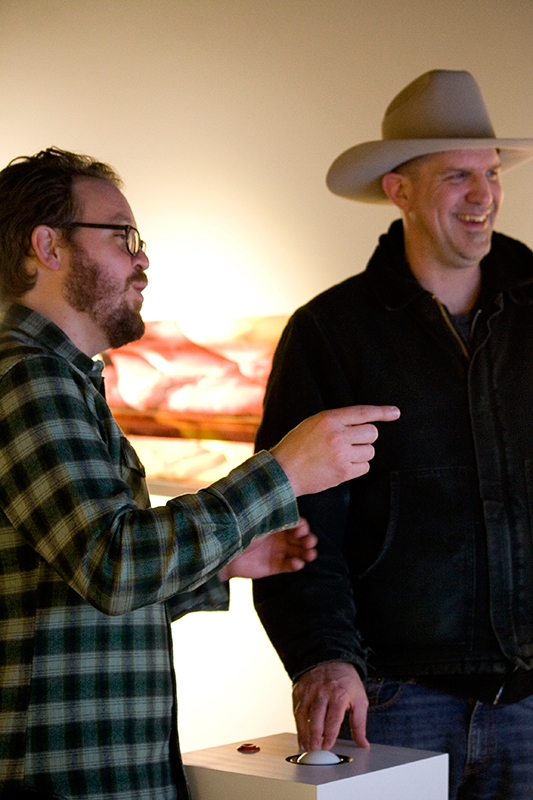 Trent Call talks about his exhibit with visitor Brad Wheeler at the UMOCA. Photo: UMOCA

Think of the classic fast food television advertisement: on an entirely white background, an enormous burger plops down before us in slow motion, and we eye its juicy, glistening patty. The burger is stacked with freshly chopped vegetables and perfectly melted cheddar, and it settles nicely between two golden, toasted sesame buns. The advertisement’s imagery is undoubtedly dramatic and overblown, but it’s timeless because it works. We’re drawn to those often fake, hyper-realistic models and images of food, which the United States’ fast food industry has come to rely on in order to increase its already massive revenue.

Local artist Trent Call used these exact images, taken from our daily lives, and reinvented them for his exhibition, Processed, which opened Dec. 12 in the Projects Gallery of the Utah Museum of Contemporary Art. With music playing in the front lobby and a reception with drinks and hors d’oeuvres in the back, the museum was bustling and cheerful, filled with a medley of attendees—museum board members, staff and volunteers, friends of Call and an assortment of regular gallery-goers.

In Processed, Call’s work uses collage, digital media, painting and found objects to manifest new ways of exploring the fast food industry, consumerism and our perceptions of art and the world around us. While the pieces vary widely in medium, they all are stimulating and, when viewed, catalyze an examination of a society that consumes the mass-produced and synthetic at an astonishing rate.

Of the eight pieces in the exhibition, two were found objects. The first, Hot Pastrami (2014) was simply a large poster of a close-up photograph of a sandwich, rolled up at the top and curved at the bottom into a couple of waves. The presentation of the poster parallels the original photograph of the hot pastrami. In the original, the photograph zooms in to showcase every detail of the savory slices of meat. In Call’s creation, the undulation of the poster adds another dimension to the sandwich and all its layers of wavy meat slices. The second found object, The Feast (2014), is simply a model of a Subway sandwich, placed so that it sits slightly open toward the viewer, accentuating its unappetizing plastic folds of various meats and the lime-green confetti lettuce strips.

In Call’s interactive digital installation, Hamburgler (2010-’14), 12 picture-perfect burgers are lined up neatly on a screen, reminiscent of the classic white-background television advertisement mentioned before. When viewers use the trackball to hover over each burger, however, the ideal sandwich is replaced with a photograph of the actual: squished, lopsided, wilted, discolored and a little sad. When viewers click on an individual burger, the image becomes a staticky, neon .gif that flashes spasmodically until you move on to the next picture.

Along with a small but impressively detailed and vibrant oil painting (Wet and Wild) as well as a muted vinyl collage that is unusually reminiscent of some Cubist painting by Picasso or Braque (Big Mac), one of Call’s most notable works in the exhibition was Hotdogs (2011). At first glance, I assumed the work was a meticulous painting of countless identical hotdogs, aligned diagonally. Rather, the piece is a collage, a series of prints adhered precisely so as to create a singular illusion. The work is classic pop art, and it sums up the exhibition well. Hotdogs is comprised of a series of prints, produced and arranged—simulated—in order to appear as smooth and homogenous as possible, constructing the same aesthetic that the fast food industry uses in its marketing.

Call’s work is also featured as the fourth installation in .gif Shop, UMOCA’s inquiry into the .gif as a form of contemporary art. On three screens, Call harkens back to his charming comic style with a handful of .gifs. In the first, Call’s zine style becomes a time-based work: a skull explodes, a cube grows a face and a punk-looking kid head-bangs. In between is a goofy .gif of bread popping out of a toaster, reminding viewers that these .gifs are still parts of Call’s exploration of an idea before its resolution. On the second screen, Call investigates the glitch as an original, focusing on pixelated and discolored video clip mashes. On the third screen, Call presents his mesmerizing tessellations, which are closest in style to the typical algorithmic precision of the .gif art movement.

Call is a Utah favorite. His iconic comic-style characters and their colorful backdrops pop up all over Salt Lake City on stickers, postcards and buildings. His work in a museum doesn’t disappoint either, and this exhibition at UMOCA offers the artist a distinctive new exposure. Call’s pieces in Processed and .gif Shop are not only delights for the eyes, but they are also acutely evocative, sparking diverse societal and artistic commentary.

Trent Call: Processed is on display at the UMOCA Projects Gallery through January 17, 2015. .gif Shop is on exhibition through March 14, 2015. For more information, visit the Utah Museum of Contemporary Art online. To see more of Trent Call’s work, visit his webpage.