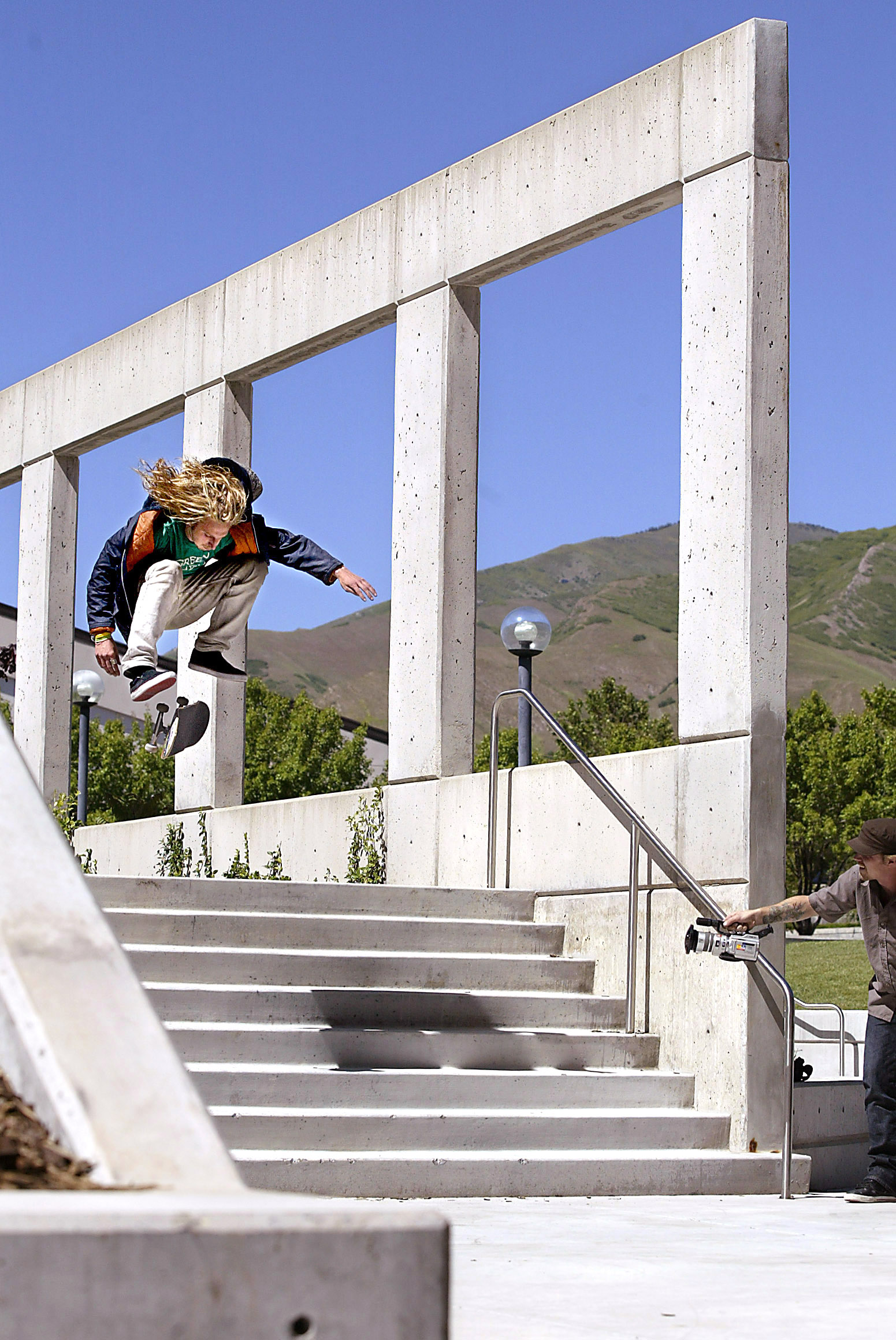 I really fucking hate the news. I also hate people who believe the news. I guess I’m a big believer in “no news is good news.” So when I got asked to show some newslady how to ride a skateboard, I was at first hesitant. But then when they told me it would be a live broadcast for the morning show, I became less hesitant. I started thinking of all the bad things I could get away with on live news that I couldn’t get away with on an edited piece of broadcast shit. Like saying, “Feltch!” and other dirty words of that nature (I managed to say, “OH Feltch!” twice during the broadcast, by the way!)Anyway, I was supposed to meet Kelly Chapman of KUTV Channel 2 News at six in the morning at Guthrie Skate Park. Due to the short notice, I really had no idea what they expected me to do. The only instructions I received were to round up a couple of skaters and bring some safety equipment. Instead, I brought a longboard, an old-school poop ripper and a couple of dirtbag skaters with me.There’s a reason I don’t skate at six in the morning. It’s fucking hard. I don’t even get up at six in the morning, with the exception of an unexpected bowel movement, let alone to go skate.

Groggy-eyed and saggy-pantsed, I got out of my friend’s car and entered the skate park where Kelly was standing. She introduced herself and showed me how to put on the wireless microphone. Then she explained how this shit was supposed to go down. Every half hour or so, the studio would broadcast us live from the park. Much to my surprise, Kelly had somewhat choreographed what we would be doing during each segment.

Now you’re probably wondering why I find Kelly’s preparedness surprising. Well, let me tell you some things abut Kelly. First of, she was pretty nice. But she defiantly creeped the fuck out of me for a couple of reasons. Mainly because that annoying energy she carries with her on air stayed with her when the camera was off. Yup, she was exactly the same off camera. I started wondering if this former Miss Utah was really a robot built by Viacom like I suspect Britney Spears is. I wondered what would happen if I unplugged her wireless mic? Would she shut down? Or was there some way I could save Kelly and get her out of the Channel 2 matrix?

Probably not, seeing as how her job forces her to get excited about shit she doesn’t or shouldn’t care about. Like hotdog-eating contests, who grew the biggest zucchini in Davis County, or, on this particular morning, learning how to skateboard with Mike Brown. But I am glad she was nice to me, because after meeting Fox 13’s Shauna Thomas last week, it’s apparent that people on the news think they don’t have to be nice to anyone. Shauna was a total bitch, but that’s another story. The first segment began with Kelly asking me why the long board I had was so big and long. I’m thinking, “What a stupid question.” So I responded with a stupid answer: “This board is designed for older, heavier skateboarders. Mostly hippies and college students ride these things.” I said.

Why the hippies?” Kelly replied.

“Because they can’t do tricks,” I said.

During the second segment, Kelly asked me questions about skateboard slang. I told her that skaters always say things like “gnarlishious!” which means good. And “whacktastic,” which means bad. I also convinced her to say on live TV, “off the shizzle!” and “fly Betty!”

It was so hard to not laugh at her while she was saying shit like, “I must be the old hippie today because I’m riding a long board!” She seemed oblivious to the subtle degrading of skateboard culture.

But the real trouble came in the final segment. I couldn’t have planned these events out better myself. First, she mildly chastises me for not bringing any safety equipment. So I make a point to let the viewers know that it is important to skate within your abilities. I also lied and said I wear pads while skating aggressive terrain.

Then this little skateboard buddy and his dad show up at the park. They were excited to see their local park on the news and the dad was excited to see Kelly. He was perving out on her pretty hard.

The little skateboard buddy was the epitome of a lot of shit that’s wrong in skateboarding today. Crooked bicycle helmet, cheap Wal-Mart skateboard in hand. The kind of kid you have to yell at all day to get the fuck out of your way at the skate park and you run him over anyways. Thus giving him a harsh but much-needed lesson in skate park etiquette.

Anyway, Kelly is talking to him about the importance of wearing helmets and then decides she’s going to ride my skateboard down the shallow bowl at Guthrie. I ask her if she needs some help. I put my hand on her shoulder as she’s about to roll in.

Then it happened. Kelly ate some serious shit on the live morning news. And to make matters better, it looks like I pushed her. I swear I didn’t, but after my girlfriend reviewed the tape and got to see how I was acting during the rest of the show, she’s convinced I did. I don’t think that Kelly was seriously hurt or seriously pissed. She showed signs of neither as she got up laughing. I reminded her that she was skateboarding outside of her abilities and she ended the broadcast by saying, “That was whacktastic!”