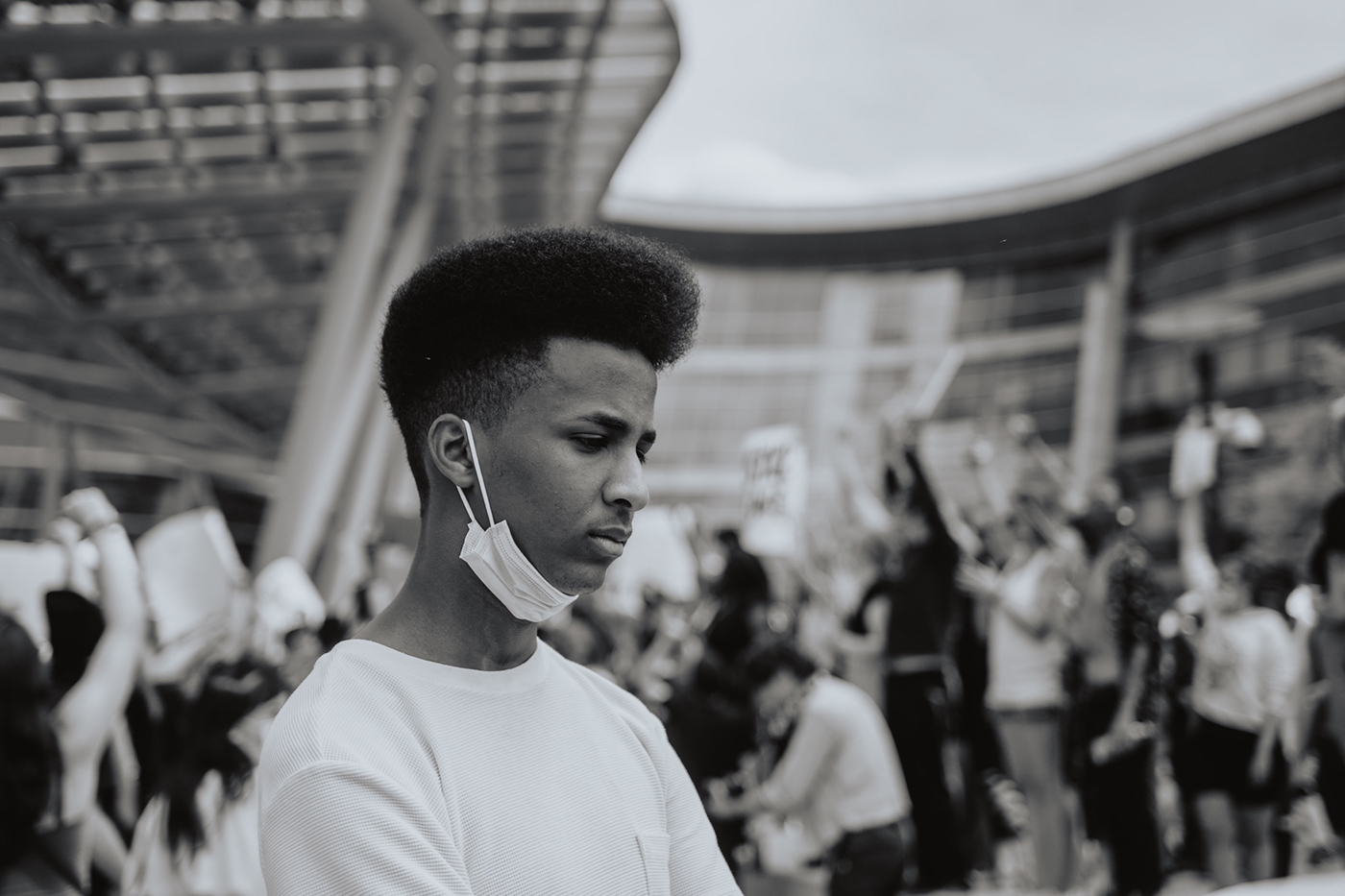 Daud Mumin on Allyship and Activism

Daud Mumin is a young activist in our community who’s been working since he was 13 to effect political change. Mumin has worked with Black Lives Matter since 2016 and also recently became the youngest board member at March for Our Lives. His recent work has focused on taking an intersectional, equitable approach toward issues like gun violence and police brutality, conceptualizing them as symptoms of larger structural issues. Here, Mumin shares his thoughts regarding how non-Black people can be the best ally, as well as what makes a successful protest.

SLUG: What do you think defines someone as an ally?

Daud Mumin: I think it’s important to understand that allyship is not a self-proclaimed title. A lot of people are like, “I am an ally!” and I’m like, “Interesting. Which one of us said that?” An important trait of an ally is that they are in the work not to call themselves something but to do the work. Another thing is that an ally is someone who puts their body on the line, right? They’re showing up. They’re protecting vulnerable communities. When we’re in these streets protesting, we’re putting ourselves in direct harm’s way. We’re putting ourselves in front of the police, right?

So it’s important for allies to use their privilege and ensure that these vulnerable communities we need to protect are actually being protected. That also means being inclusive and accessible. It’s not always about putting your physical body on the line; it’s about putting your resources on the line. How are you putting your money, your education, your title on the line? We’ve seen celebrities from all across the country give black activists their social media to amplify their message. That’s an example of giving resources, of giving space.

The fourth thing is to decenter your own narrative. What’s important about allyship is that it’s specifically not about, “How is my whiteness, my able-bodiedness, my class privilege—how are these things at the center? How is this oppression revolving around those things?” No. It’s about, “How do I center the experiences of Black people? I must look at my experiences through their lens.” So often, people talk about “Oh, Ahmaud Arbery can’t go on a jog, but I can. That’s a terrible world we live in.” And I’m like, “You just addressed the problem through your lens. It was more than just a jog, right? It was a murder in the street.”

It leads me to my fifth point, which is that allyship is not performative. Performance is dangerous to the movement. When we allow someone to put on theatrics about donating or signing a petition, attending a protest—when we allow people to center their worth instead of what the movement actually is, then you’ve co-opted—you’ve taken over space. I think that’s one of the biggest ways to delineate an ally versus someone who’s against us: Are they taking up space they shouldn’t be? Are they taking up resources they shouldn’t be? That’s a conversation a lot of allies need to have.

Not taking enough action is also performative. I always ask people, “Why did you take those steps? Was it because you felt bad?” If that’s what you’re doing, you’re not an ally. An ally is going out of their way to do something. They’re taking away racial, socio-economic—so many different privileges—and putting them to the side and going to the fight. So many people, when they sign petitions, they feel guilty. If that’s what you’re doing it for, you’re doing it for yourself. You want to feel good about yourself. Once that’s your goal, that’s not allyship! That’s self-indulgence. That’s called having your head up your own ass. That’s as simple as I can put it.

The sixth thing is continual education. Allies need to understand that this is a lifelong journey, a lifelong work, that has to be continued over time instead of this one-stop shop, right? It’s about the continual education and continual support of communities. A lot of “allies” are like, “Oh, the goalpost is being shifted!” And I’m like, “No, actually, we’re just increasing our standard for what it means for you to be in our movement.”

I’d say number seven is following the lead. That means, again, not taking up space: Don’t lead chants. Don’t speak when you don’t have anything productive or constructive to add. It’s about giving space, and when we say that we mean literally give—not just step away, but give it to someone.

I can go on with eight, nine, 10 and 11. But that’s the first seven things anyone who wants to be an ally can work on.

SLUG: How do you feel non-Black allies can support Black people in a demonstration setting?

Mumin: One, follow the lead. I always tell people, “This is our protest. You’re a guest. This is our fight. You’re invited. So behave like a guest.” You go to someone’s house—you wouldn’t be opening their cabinets. You know how to behave! You know the simple decency of being a good house guest. It’s the same thing with a protest. How do you show up and do what you need to do? I think of protests, especially in terms of non-Black people, as an assignment, and there are specific tasks: You show up peacefully, you show up respectfully, you follow the lead, [and] you don’t lead chants. It’s sometimes disturbing when I see white people leading chants of “I can’t breathe.” Why? There are plenty of other Black people who could have led a chant, but you chose to speak up. Why? Do you wanna feel like you’re doing something? Do you want to feel like you’re doing “enough”? Then just keep showing up!

Another thing that’s really important that’s so misunderstood is that if a Black organizer isn’t doing it, you should not be. If a Black organizer didn’t tell you to do it, don’t do it. You being non-Black has a structural privilege to it. It’s not about, “Oh, I talk this way—”no. Your physical skin color has a subconscious privilege embedded in it by the police that they are less likely to attack you. They are less likely to hurt you. It’s their job to put themselves on the line because we’re already in harm’s way. They’ve brought harm to us, so the job of white protestors is to find ways to circumvent that harm to us. It’s not centering your stories or your narratives. It’s about doing the job.

I think Utah does a really good job, especially allies, because in the past two weeks of protest, white allies have followed our lead, have done things to put their money where their mouth is, have done things like walking black protestors back to their cars to make sure they’re safe. Things of that nature. I hope other states and cities start looking at the example of Salt Lake. We have allies here who are willing to do the work. That’s the most important thing about an ally—be willing to do the work.

SLUG: What can non-black people do outside of demonstration settings?

Mumin: Pick up a book. Start reading, start learning, donate, give resources—redistribute the wealth you’ve accumulated because of your privilege and status in society. Continue showing up. Just like any movement, each city, state and community needs different resources. What we need in Utah is for people to give money and to show up: presence and monetary resources. But that may be different in other communities.

I would encourage people to keep their ears open. The demands are there. You just have to follow the lead, [continually] doing the next thing. It feels like it’s a never-ending cycle of action, but, hey, welcome to our lives.

SLUG: What demonstrations were you a part of that you considered successful?

Mumin: I feel like what makes any protest successful is a clear narrative, a clear demand—centering the experiences of those who are at the forefront of the violence so that they’re at the forefront of their respective movement. Oftentimes, that is vulnerable communities like Black people, brown folks, Indigenous folks, LGBTQ+ and trans folks. How can we center the narratives and stories of those people that are facing these horrific instances of violence? In the specific case of police brutality, how can we center the stories of Black people? It’s important that we find ways to understand how demonstrations, protests, rallies and marches are simply the beginning of the conversation. They’re not the end. It’s how we bring people together. Once we have that momentum, how do we transform it into something that’s more productive, more logistical? How can we get more action out of it? Our words are only as powerful as our actions. But also, our words are only as powerful as our education. One of the most common next steps is education. When you can build something off a demonstration, it’s successful. Numbers don’t mean anything until we turn those numbers of people into power, into actionable steps to reduce the harm against communities of color.

If you’re reading this and, like me, strive to be an ally in this movement, think of the ways in which you can center Black people in processing the reality of structural racism and support them. Follow the lead, as Mumin says, and seek out opportunities to act. Visit marchforourlivesutah.com/resources for lists of organizations, Black-owned businesses, events, petitions and donation pools relevant to our current community needs. Start doing the work, and if you already have, keep it going. We’ve got a long way to go.