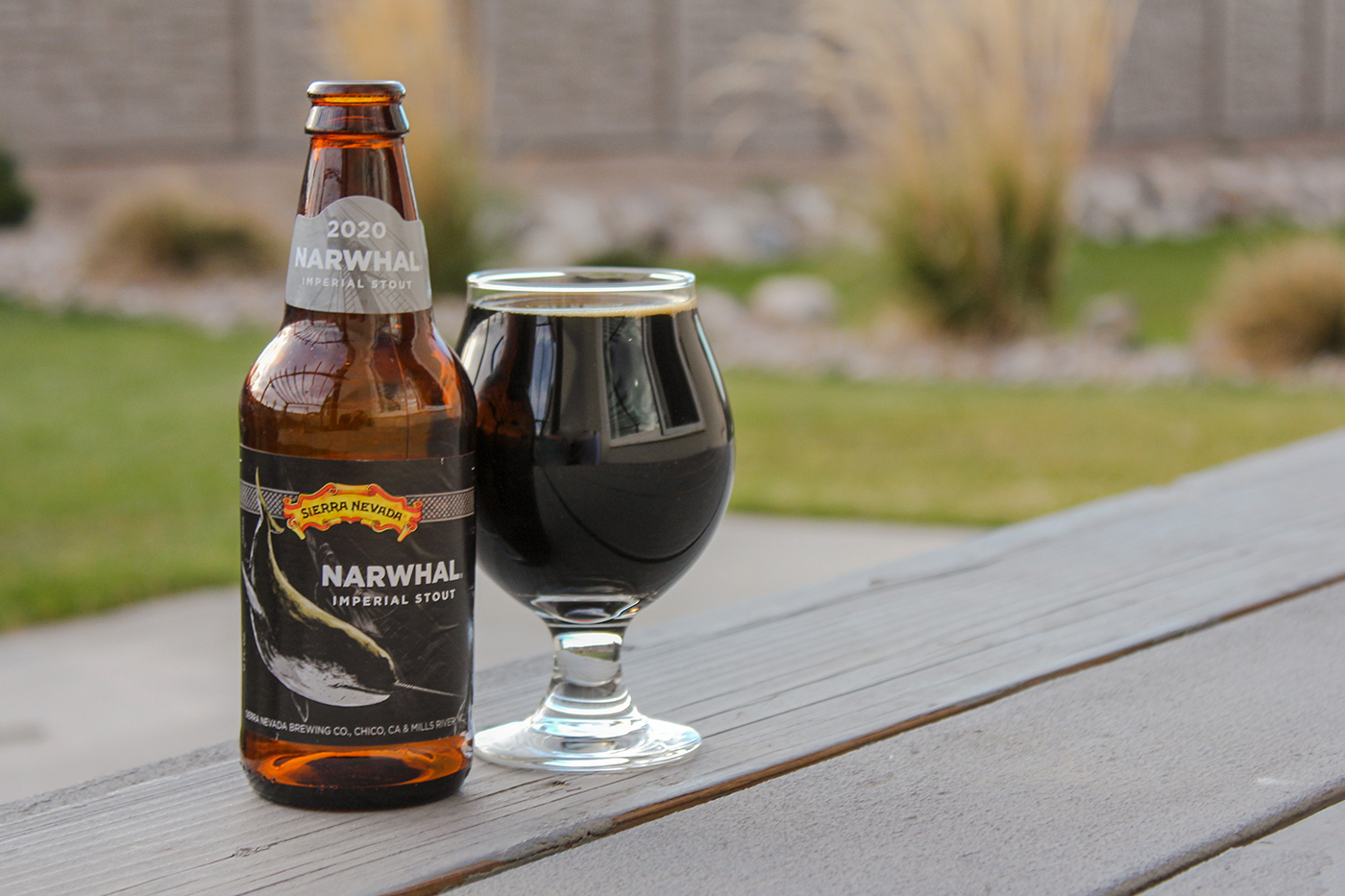 By Chris and Sylvia Hollands
December 3, 2020

It’s stout season, so it seems appropriate to dive into the darker Narwhal to close out this interesting start of the decade. Honestly, we generally do not adhere to the “stout season” mantra, per se; we’ll enjoy these delicious brews during any of the 365 days. Admittedly though, they do seem to be more appealing during the colder months of the year with their robust flavors and stronger-than-most alcohol content.

Sierra Nevada Brewing Co. has what seems like a suitable offering. In a world full of adjunct-infused pastry stouts and carefully blended, barrel-aged ales, it’s nice to find a more traditional take on the style. Sierra Nevada’s annual release of their Narwhal imperial stout is something we like to pick up every year. It’s a bit of a throwback brew for us, and this point of nostalgia is uplifting during “these uncertain times.” Since imperial stouts age well, we like to save multiple years’ worth of releases to enjoy and test the vertical. If you have the chance, be sure to grab a few extras!

Their Narwhal imperial stout comes in a familiar 12-ounce bottle labeled with a picture of the titular beast. Unlike the friendly narwhal who ushers away Buddy the Elf, this narwhal has more in common with the great leviathan in Moby Dick. After removing the bottle top, the faint sound of a short hiss from the blowhole can be heard. After the release, we pour the murky liquid, which creates a uniform and smooth head, ending with a rocky and uneven visual. This layer remains for several minutes before eventually subsiding into the sea of darkness.

The aroma is familiar with sweet, malty sugar mixed with toasted dark-roast coffee, giving a hint of something to hook you. That hook is the presence of the roasted malt blending with black premium coffee, and the beer  finishes with a hint of black licorice that is prevalent throughout consumption. As this beer warms up, you can genuinely enjoy the smooth mouthfeel and ever-present alcohol dancing on the tongue. Over the years, this staple beer is consistent.

Sierra Nevada, one of the most well-known early craft beer pioneers, paints the Narwhal as a monster. Although all signs point to this being a pretty accurate assumption, there’s something especially important about sticking to the basics and holding on to tradition. Truth be told, Narwhal may have been a beast back in the day with its monster-size ABV compared to many in its close peer group. But by today’s standards, there are, in fact, many beers that can topple this one over in the imperial stout category. Where Sierra Nevada wins is that we can count on something each year from the brewery and know exactly what we’re going to get. It’s this level of quality that makes the beer so special.

In addition to the Narwhal, Utah is lucky to have many other beers of this kind that can be found from our own local craft breweries. Squatters’ Outer Darkness, Red Rock’s Drioma and 2 Row’s Dark Alley are some amazing go-to stouts that you can generally find available most times of the year. So yes, it’s cold, and sure, this is “stout season,” but don’t skip on these beers the rest of the year. Narwhal usually makes its appearance known at the DABC come fall, so look for it there, and don’t miss out on the many local options out there to enjoy year-round.