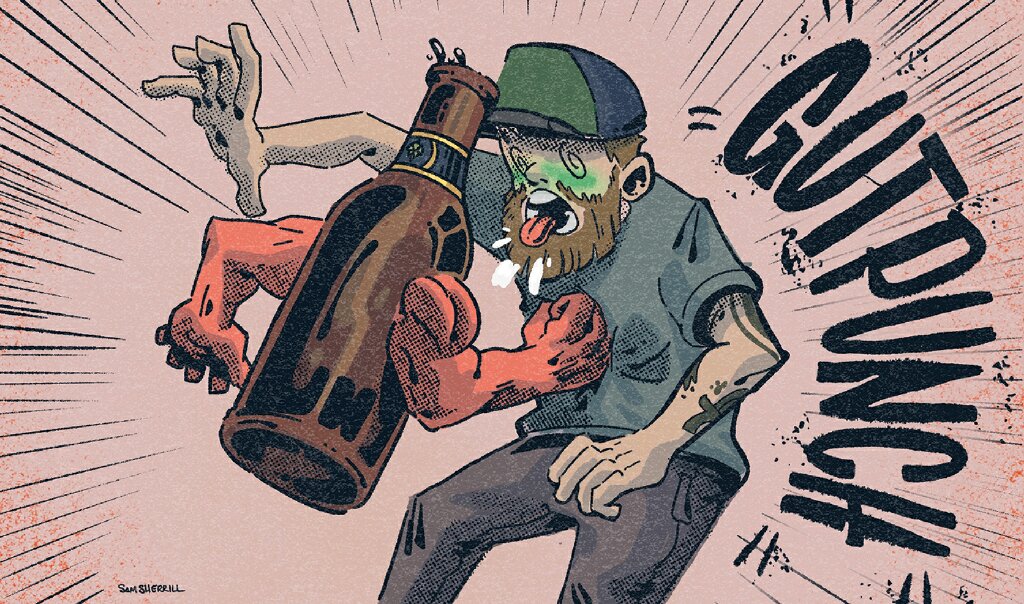 I’ve been a part of SLUG Mag’s prominent Beer Issue since its inception. It seemed as natural as Natural Light that SLUG would theme such an issue. After all, the physical mag is basically a coffee-table coaster for about eight cold ones. This literary yeast has steeped its way to the top of the hops—countless reviews of brews while chugging and plugging our favorite suds with our buds. It’s been a beautiful, toxic ride. But as with most beautiful things, there’s usually a dark side.

But instead, I wanted to address something that I don’t think has been addressed in any Beer Issue, something I probably know more about than I actually know about beer. And trust me—I know a lot about beer. It’s mostly yellow when it’s good, it goes in my mouth and straight into my tummy, helps me take naps and makes me feel more attractive.

But there is a massive side effect to all this awesomeness—and it’s not the hangover. Hangovers are exaggerated, in my opinion. The easiest way to combat a hangover is just stay drunk—works every time. No, I’m talking about the dreaded beer up-chuck. Call it what you want—call it by its proper name, vomit. Call it by its numerous slang terms: puke, barf, ralph, spew, chum, Mike Abu. Whatever you want to call it, we all know what I’m talking about.

“Like an ER doctor is to blood, I am to puke—just numb, for the most part, and not grossed out.”

I would like to start by saying that puking is a normal bodily function, and in regard to drinking beer, it can be controlled. It’s fair to say we have all barfed at one point or another in our lives. Like, if I met someone who had legit never puked, that would be akin to meeting the Virgin Mary or some shit. But yeah, I think everyone has puked—like, Beyoncé has puked, Brad Pitt, Donovan Mitchell, Madonna.

So let’s not make this subject taboo. After years of working in the service industry revolving around liquor and beer, I’ve become numb to the grossness many associate with vomit. Like an ER doctor is to blood, I am to puke—just numb, for the most part, and not grossed out.

Regarding the Beer Issue, it’s important that we address the fact that beer can make you puke. It’s a sad reality, but one that needs to be addressed. There are a couple different kinds of beer pukes. There’s the obvious one of where you just drank too much beer. Is there too much of a good thing? Yes, and the “I drank too much beer” puke is a frustrating one. I’ve done it more than once. And after sharing the embarrassment with the inanimate object that is my toilet bowl, all I really think of is the money I wasted on getting wasted.

“One gleaming positive of the beer barf is the fact that it will indeed ease your hangover the next day.”

But the other kind of beer puke isn’t so bad and can actually make you the hero of the kegger party. It’s the infamous puke-and-rally. Basically, that means you barf and just keep going, man. It will earn you endless amounts of scene points from frat boys across the land. The puke-and-rally usually happens when you just chug beer down the wrong tube. You probably won’t even be drunk when you do this—we’ve all done this with water. But somehow, the beer foam just tickles your throat wrong, and the next thing you know, you’re projecting onto the feet of that person you like.

I’d also like to address the best and worst places to empty your tummy. Best places other than the SLUG office? Hmm, let me think: I’d have to say work. First off, it means you were drinking at work, which is awesome. Second, it means you’ll probably get sent home and can take a sick day.

Other best places to puke would be off of anything tall, like the top floor of a parking garage or off of a ski lift. I also harbor a personal fantasy of barfing while doing a zip line someday. If I lived in my perfect dreamworld, I’d puke out of a hot-air balloon at least once a week. Maybe someday, Mike Brown, maybe someday …

Worst places to puke? Work. Because you might get fired, and they would know you where drinking on the clock. Anytime you puke at a Mormon family gathering is bad, too—I’ve had to use the “I have food poisoning” excuse more than once around my Mormon fam. Anywhere not near a toilet sucks, too, like in your car—that’s a bad one.

But let’s not focus too much on the negatives here. One gleaming positive of the beer barf is the fact that it will indeed ease your hangover the next day. If you get those puke demons out of your system, it can actually go a long way. Trust me: I’m a puke expert.