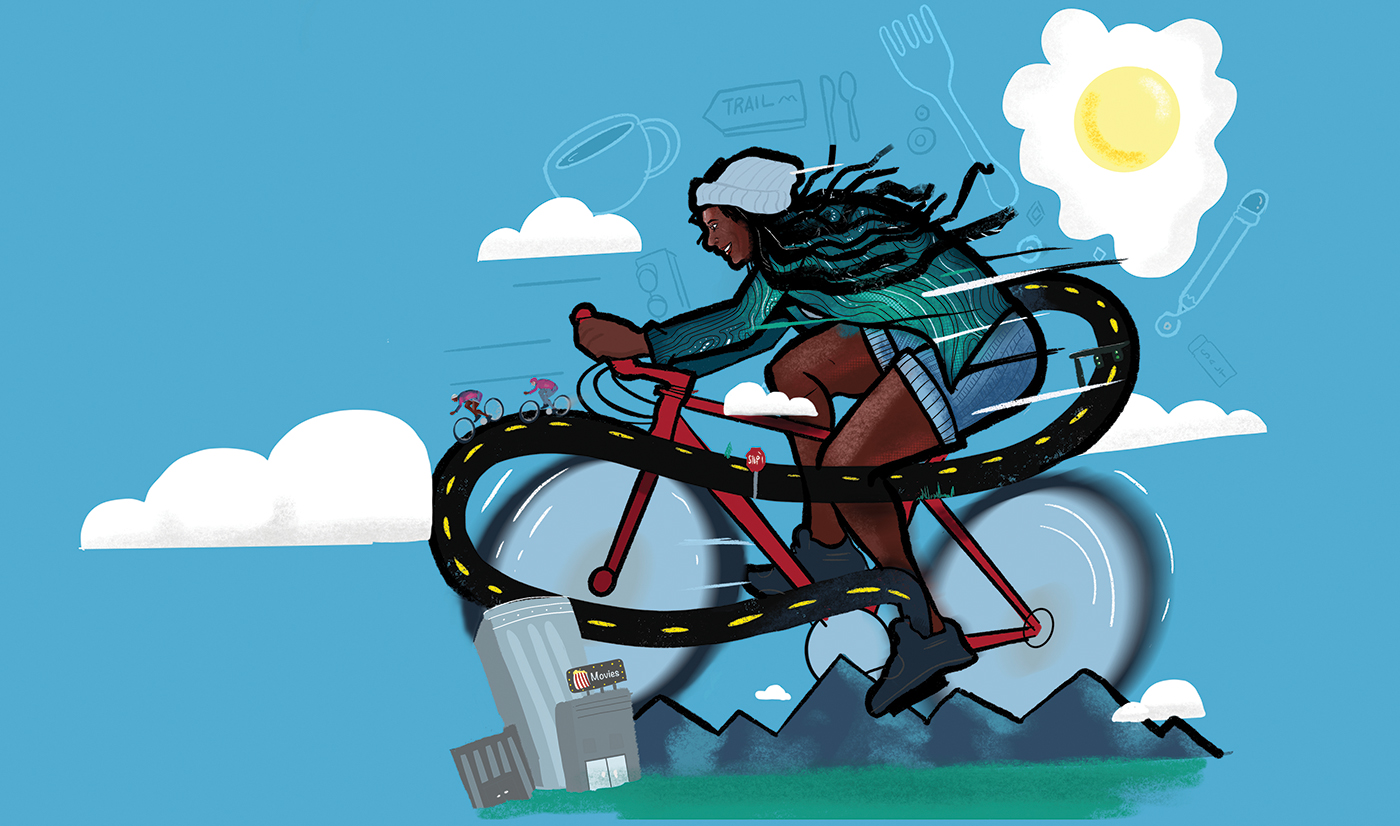 Whether you are new to city biking or depend on two wheels to get around, your cycling habits have had to shift due to social distancing. Some rides have become more about getting a little fresh air as opposed to being modes of transportation. I admittedly started this list of noteworthy, 5–10-mile rides pre-COVID-19, but have decided to keep it as is. Here’s why: 1. There’s no harm—particularly with fewer cars on the road—in testing out these routes. Go at your own pace, and if these rides are longer than you’re used to, take breaks when needed. 2. Many establishments are still open and would appreciate your patronage. You may actually prefer getting your order to go and locating a pleasant spot outside to enjoy it versus dining in. 3. As bleak as the times feel, this won’t last forever!

Here are my top five options for biking around the city:

You’ll find that the route westward from popular breakfast joint Eggs in the City on Parley’s Trail is mostly downhill. Take a breather looking eastward toward the views you’ll get when you eventually trek up to the Grandeur Peak trailhead. On your way downtown, check out Central Ninth. Blue Copper Coffee Room and Publik Coffee Roasters offer caffeinated pick-me-ups, and The Big O Doughnuts will be the right type of just dessert if you decided to do laps at Sugar House Park during the ride. Your final destination, Fisher Brewery, boasts a solid selection of beers and bike racks within eyeshot of the patio.

From 2015 to ’18, the City Library organized a 15-mile community bike ride to four of its branches, modeled after a similar event in Brooklyn. I rode with both my fixie friends and other folks I convinced to join in, some of whom hadn’t pedaled in years. My favorite segment was up the Jordan River Parkway Trail from Glendale Library to Day-Riverside Library. Both branches are less than half a mile from the trail. The International Peace Gardens at Jordan Park is an attractive pit stop along the way, and you can venture south to the Beehive Bike Hive Polo Club’s courts to see skilled cyclists at play. Teams practice Tuesday and Thursday nights, as well as Sunday afternoons.

The ride down Emigration Canyon will be a scenic and invigorating jaunt when you’re finished having breakfast for dinner at Ruth’s. I suggest riding out before sunset—you don’t want to bomb downhill blinded by the sun or in the dark. The “Gilmer Drop,” just south of 900 South from 1300 East to 1100 East, is a favorite among locals. And why not visit some of the local businesses on 9th & 9th before a film at the Tower Theatre? Coffee Garden, The Stockist, Contender and East Liberty Tap House are less than a block away.

Hello! Bulk Markets are perfect advocates for a plastic-free lifestyle. Be sure to bring your own containers to carry home food, cleaning supplies and body-care items. The ride up to the Avenues can be a tricky one. I vote for taking a safer yet slightly longer route on 200 South instead of biking North Temple. Then, head back north on 300 East and turn right to make your way onto C Street. While you’re in the neighborhood, purchase quality tea blends by the ounce at Greenthread Herbs on 4th Avenue. Pop back onto 3rd Avenue for a gradually uphill ride that’s surprisingly relaxed. Once you reach University Street, it’s downhill on Guardsman Way and 1500 East to Caputo’s. There, you can finally set your inner epicurean free by sampling fine, imported chocolates.

As the list of Gallery Stroll sites continues to grow, don’t forget that coffeehouses, such as King’s Peak and Mestizo, and small galleries like Art Access and the Eccles Gallery (located at SLCC’s South City Campus) also showcase local art. If you want to break the 10-mile mark, check out Atelier and Tailor Cooperative on Pierpont Avenue between 300 West and 400 West, which are less than two blocks off the route. The Gateway is an excellent place to end the night with its pop-up galleries each Stroll, late-night eats and plenty of spaces to chill.

This bike ride is mostly composed of bike lanes great for building confidence cycling alongside motorists. Make sure to ride safely no matter your skill level, especially if you partake in a glass of wine during the night—and always wear a helmet!