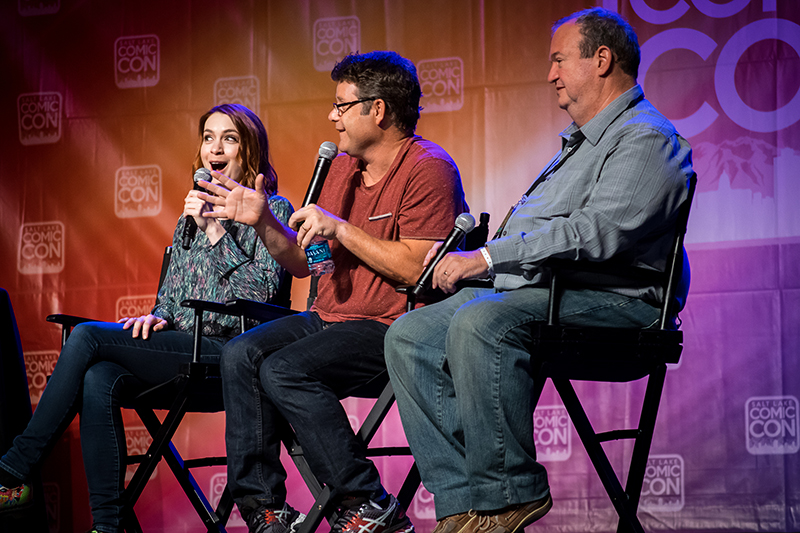 Alan Tudyk’s “Con Man” Is Full Of Stars And Laughs

Earlier this year, Alan Tudyk and Nathan Fillion set up a campaign to fund a web series called Con Man. It was ridiculously over-funded with over 3 million dollars invested and 47,000 funders because it’s by our favorite Firefly captain and pilot duo. It comes out for the funders Monday, 9/28 and the rest of the world can watch it on Vimeo Wednesday, 9/30. Our little con has gotten so big, that we got a sneak peek into the finished product with a few special guests. Sean Astin, Felicia Day, PJ Haarsma and Tudyk himself were there for questions. I love the fact that Tudyk crashed his own panel by appearing on stage after claiming he couldn’t get the pesky Skype thing to work. Standing ovation, loud cheers and it was amazing.

The two clips of Con Man they showed starred Astin and Day in their respective roles in the new show. Astin plays a version of himself that runs into Tudyk as Wray Neerly on the convention circuit. He gives Wray the advice to the just be who the fans think he is, and he’s hilarious. Day plays an assistant to Wray at a convention and she’s a huge fan. She’s so dedicated to her job that she dresses up in the exact same outfit as Wray, in case she needs to act as a decoy. It’s all very silly, and it got a lot laughs from the crowd.

After the clips, the crowd got to ask a few questions—a Tucker and Dale sequel was one of them. Tudyk doesn’t want to do it unless the script is as good as the first, but it does sound like they’re in talks for it so rejoice fellow Tucker and Dale fans! We may well get that sequel. This was one of the best panels of the con and I can’t wait to watch Con Man.