With all the panels and guests, it’s hard to decide which panels to go to. One of the first panels of Fantasy Con on Friday was with one of the memorable characters from Lord of the Rings – Gimli, the gruff, lovable Dwarf played by John Rhys-Davies. He’s a good six feet without the movie magic but he’s still got the gruff voice and he’s definitely lovable. 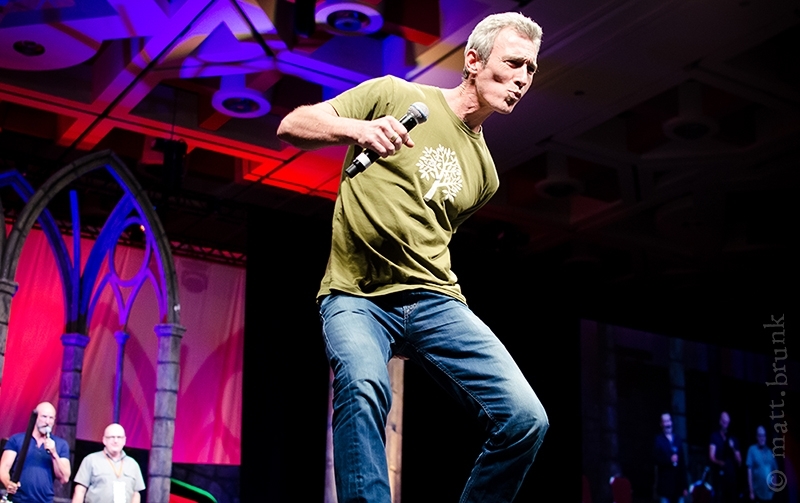 FantasyCon is kind of like a three-day fantasy camp. The exhibition hall isn’t packed with vendors—it tries to create more of an experience. There’s an archery range where you can test out how well of a sniper you are in real life (that’s how I played Skyrim). I loved taking out people from afar without being seen—It’s one of the cool, interactive things you can test out. There’s also the battleground where you can watch some people fight with foam and real swords—similar to a gladiator ring. There are a few video game outposts throughout the hall as well as the board game area where you can take a break from the Con to play a few games with your friends. The board game library is pretty expansive, and throughout the day there are giant versions of some of the more popular games—Ticket to Ride, Chess, Tsuro, etc.

It just doesn’t seem to be a big enough draw. I judge the size of a Con by how many people are in the streets surrounding the convention center. People flooded the streets for the Salt Lake Comic Con, but people only littered the streets for FantasyCon. In fairness, FantasyCon picked the wrong weekend to entice attendees: 4th of July weekend is a big vacation weekend for most Utahns and we tend to leave town altogether. Simon Pegg and Summer Glau are a big enough draw for most of geekdom, but this Con is all about the Tolkien fans. There is a huge collection of Dwarves from both The Hobbit and The Lord of the Rings. There’s even a few of the lovable Hobbits to see. They’re on a few different panels as well, not just their spotlight panels. They’re also doing a few interactive panels.

One of these interactive panels was a fun, inside look at how Dwarves were trained for Peter Jackson’s Lord of the Rings and Hobbit Trilogies. “Dwarven Boot Camp” involved four of the Dwarves from the Hobbit films: Graham McTavish (Dwalin), Peter Hambleton (Gloin), Jed Brophy (Nori) and William Kirchner (Bifur). These Dwarves know how to entertain a crowd. McTavish and Brophy have some fun chemistry as they banter on the stage. William jumps in here and there to add his own comic relief, while Hambleton was the quiet one. Brophy took the most control of the panel, being center stage and showing off the moves and adding some of his own. They’re on the schedule to do a Hobbit: Whose Line Is It Anyway panel on Saturday, which should be hilarious based off of this panel.

They invited audience members up to the stage to teach them all the aspects of being a Dwarf: walking, talking and fighting. Walking like a Dwarf sounds easy enough, but it’s harder than it looks. You have to pretend you have a cannonball in your stomach and almost half-squat. The stride is a bit tough as well—it’s in our nature to walk tall, but Dwarves kind of “walk down.” It’s a pretty interesting stride. Once you can walk like a Dwarf, you can fight like a Dwarf. The Dwarves started off with their foam weapons—they had 16 basic moves, and eight pairs of offensive and defensive strikes. It was almost like watching an exercise video, except with foam axes and swords. Brophy kept the audience laughing with his added sound effects and extra moves. It was a hilarious interlude, and you learn a little bit of the fight choreography that was in the movies.

With all the panels and guests, it’s hard to decide which panels to go to. One of the first panels of Fantasy Con on Friday was with one of the memorable characters from Lord of the Rings: Gimli, the gruff, lovable Dwarf played by John Rhys-Davies. He’s a good six feet without the movie magic, but he’s still got the gruff voice and he’s definitely lovable. He was also in the Indiana Jones films and a show from the ’90s called Sliders. He can ramble with the best of them, but at least his stories are interesting. He was asked about a whole range of things: his favorite episode of Sliders, how he felt not being in the last Indiana Jones and all sorts of Tolkien questions. My favorite one he told was one about being cast as Gimli.

Rhys-Davies didn’t believe in the project at first, Lord of the Rings was such a massive world didn’t seem like it was a book that could actually be translated to film. He auditioned thinking he would only get a bit part, he just figured it would be a bit of a vacation to New Zealand where he would only work a month or two of the slated 18 months. Instead of a small role, Jackson offered him Gimli—and Rhys-Davies wrestled with the decision. He was eventually persuaded by friends and colleagues who appealed to the actor’s desire to be recognized—the Lord of the Rings books are in every bookstore the world over. How could he possibly turn that down?

It seems like most of the panels were like this, I caught the end of another Dwarf panel and they were hilarious. All of the actors seem nice as can be, and with Simon Pegg on Saturday, I imagine it’s going to be the biggest day for the Con.