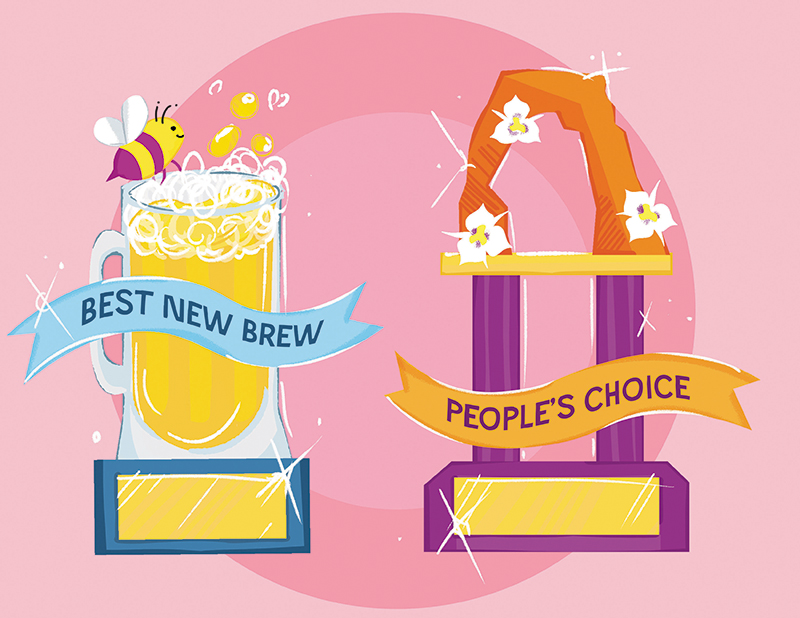 On May 12 at the Gallivan Center, SLUG Mag’s Brewstillery: A Local Beer and Spirits Festival will be SLUG’s second all-local beer festival and first-ever all-local spirits festival—all in one. Two awards will be given for exclusive brews that will be at Brewstillery. Attendees will vote for their favorite exclusive brew for the People’s Choice award, and SLUG “Beer of the Month” columnists Chris and Sylvia Hollands will be the judges for the Best New Brew award. There will also be awards given to distilleries, to be determined. Visit SLUGMag.com for more information about Brewstillery, and read up on the exclusive offerings at Brewstillery, below!

Lupulin Burst is a hazy, NE-style IPA with Cashmere and Mosaic hops. It has a fluffy mouthfeel with only a slight bitterness on the very back end. The aroma bursts with big notes of citrus and melon, a slight floral character and a hint of grass. –Matthew Allred, Communications Director

Proper Brewing has always had an appreciation for the history and tradition of beer, but we like to put our own spin on it whenever possible. Our firkin program is an excellent example: a traditional serving method with modern flavors. Tapping a firkin is a throwback to a time when all beer was served out of wooden casks, and a tap would be manually hammered into a new barrel when it was ready. The lightly carbonated beer then flows by gravity with no additional gas pressure. These days, firkins are mostly made of steel and standardized in size at 10.8 U.S. gallons, or half that and called a pin. At Proper’s Main Street brewery location, we tap a different pin every Thursday at 5 p.m., and this gives our brewers a chance to experiment. Usually, firkins are filled with a beer, and then an additional selection of ingredients is added to create unique versions of the beer. For example, we’ve done our Oatmeal Red Ale with toasted pecans, our Stumblebee Honey Lager with fresh basil, or even our Hopspital Session IPA with Sour Patch Kids. Every week is a new surprise! And as we’re always waiting for what’s new and fresh, the actual firkin we’ll be serving at Brewstillery is yet to be determined. –Rio Connelly, Head Brewer

We are very excited to participate in the 2018 Brewstillery. For the event, we will be pouring a firkin produced exclusively for this event. As Firkins are fresh for the season, the exact style and ingredients are TBD. We look for the freshest ingredients to complement the season and the style of beer. A few that we have produced in the past include a nut brown ale with candy cap mushrooms, coconut vanilla black saison and a gose with lime, lemongrass and Thai chilies. They tend to sell out before anything else, so make sure to pop over and try it early! –Shantel Stoff

Roosters will be serving a “slug beer” for Brewstillery. In support of the Utah Brewers Guild and SLUG Mag, Roosters Brewing Company will be offering a firkin. This firkin will feature Roosters’ most popular beer, Honey Wheat. We will add sour gummy worms and raspberries to give this classically sweet, light American wheat a sour, summery punch. The gummy worms are a stand-in for slugs. –Jacquie Wright King, Brewer

[Head Brewer Dusty Williams] is leaning toward an IPA, but it is not confirmed. –Joann Williams, Co Founder

We’re bringing a Kentucky Common (4-percent ABV, 15 IBUs, SRM: 18), an original American beer style, similar to a cream ale but with a deep-amber color. This session-able beer [a low-alcohol beer meant to be drunk in a sequence with other beers] features delicate aromas of caramel and sweet grain, with a low, spicy hop flavor that finishes dry. –Jeremy Worrell, Field Marketing Manager

To round out our four taps, we are planning on brewing up a batch of gose for our Brewstillery exclusive brew. We are brainstorming ideas for a delicious fruit to blend in but haven’t locked that down as of yet. Rest assured, we’ll do our best to find something that will make people smile! –Jeremy Baxter, Head Brewer

At the time of printing, Squatters and Wasatch were tentatively considering submitting firkins per brand as well.