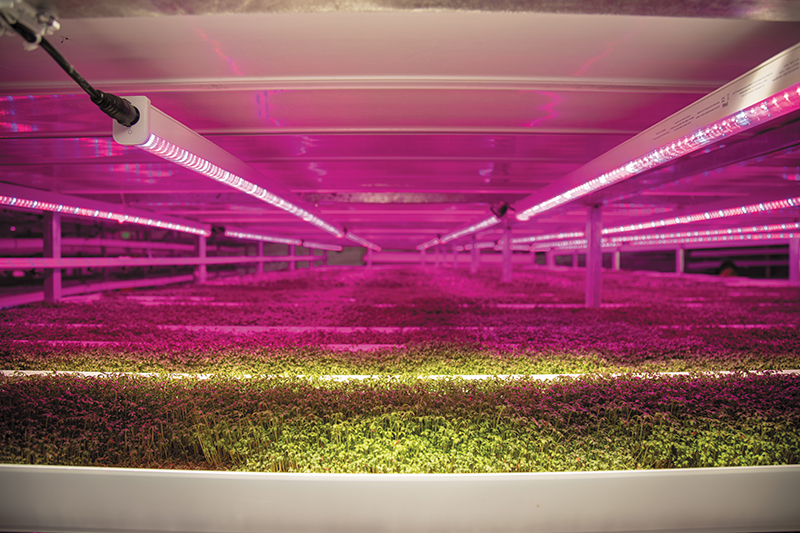 The Future is Hydroponic: Debbie Strong of Strong Vertical Gardens

Under the glow of humming, purple LED lights, a healthy assortment of microgreens grow in Debbie and Grant Strong’s hydroponic gardens. These microgreens, which include delicious produce such as mini broccoli and kale, don’t require soil to grow (though some take root on restaurant-grade burlap). The growing facility, located in Charleston, Utah, runs on a finely tuned rotation of taking full-grown microgreens out from under the LED lights to be packaged and distributed in-house. There is also a water-treatment system in place that allows Strong Vertical Gardens to recycle used water, as well as a system to sanitize the seeds and trays they grow on to ensure that their produce is high quality.

It’s an impressively efficient system that Debbie, manager and visionary behind Strong Vertical Gardens, came up with, through much experimentation and trial and error in the five years she has grown her business. “The LED lights run hardly on anything,” says Debbie, explaining how her enterprise is also environmentally friendly. “If you figure out how many times we turn a crop over in one year, we can grow about four-and-a-half acres of produce on not even half an acre,” she says. Strong Vertical Gardens—which consists of Debbie, her husband, Grant Strong and three employees—yields large quantities of a variety of microgreens in a conscientious way, using no pesticides and providing healthy, clean produce locally.

Debbie’s approach to Strong Vertical Gardens was a mixture of her passion for clean eating as well as her interest in horticulture. While Debbie had grown her own gardens before, she dove into the world of hydroponics and LED lights through her own intensive research in a spare bedroom where she once lived in Park City. After outgrowing the bedroom, then a 1,700-square-foot growing space, Strong Vertical Gardens currently operates out of a growing facility on 11,000 square feet—though their environmental footprint is minimal due to the use of LED lights and the efficiency of the production. “Everything we did, and the concept of this garden, it was trying to be as environmentally friendly as possible,” Debbie says.

Strong Vertical Gardens serves retail customers through 55 Smith’s locations and three Whole Foods locations (Sugarhouse, Park City and Trolley Square) and provides microgreens to individual chefs, such as Chef Christian Ojeda from Montage, and Chefs Chip McMullin and Rachel Wiener at St. Regis (both restaurants are located at Deer Valley Resort). For Debbie, the strongest microgreens on the retail side are the pea shoots—which are hearty as a garnish or the main ingredient of a salad; while the chefs tend to love the red vein sorrel, with visually striking red “veins” and a surprising citrus taste. “Microgreens used to be [just] eye candy for the chefs, but now it’s changing because the chefs are using them in different ways,” says Debbie. In addition to the microgreens, Debbie also has a beautiful outdoor garden of edible flowers, which chefs use to add to the color and flavor palette of their dishes. Debbie shows off a particularly vibrant marigold—whether a few petals or the whole flower is used, the effect is delicious and memorable. “The brain turns on when we see the color and the smell—it’s quirky. You put that on a cheese plate with some honey drizzled over it, and your guests [will love it],” says Debbie.

Starting Strong Vertical Gardens—which, for Grant and Debbie, meant selling their house and their yard maintenance/snow removal business in Park City to invest in the company—was a huge financial risk. However, the desire to grow nutritional, unmodified food has been worth it for Debbie, who was personally motivated to grow her own food in the interest of health and sustainability. “I really got into this because of the good food [movement],” she says. “I hated seeing stuff come out of Mexico and Costa Rica—what are we going to pass on to our kids? How are we going to be able to provide food? Heber Valley used to be all dairy cows and cattle. Down in Santaquin, there are no more apple trees. So what are we doing for sustainability and what are we eating?” she says. With a steadily growing population pushing back space for agriculture, companies like Monsanto corner the market on genetically modified foods. On the one hand, Debbie understands that the need to feed more people drives demand for genetically modified produce, though she hopes clean eating will make a push back in the opposite direction.

As we may follow his example by looking to those who rise to the challenge of growing locally and independently—in a time when the agriculture industry is becoming mass-produced—Debbie has achieved a way of growing healthy and sustainable produce, year-round in a place typically not known for year-round produce. It’s challenging the idea that produce should come from other states or other countries. “It’s fun to have people come and see real, fresh vegetables and food and know it’s just here in your backyard,” says Debbie. For more information on Debbie’s mission and the microgreens at Strong Vertical Gardens as well as recipe ideas, visit svgrecipes.com.