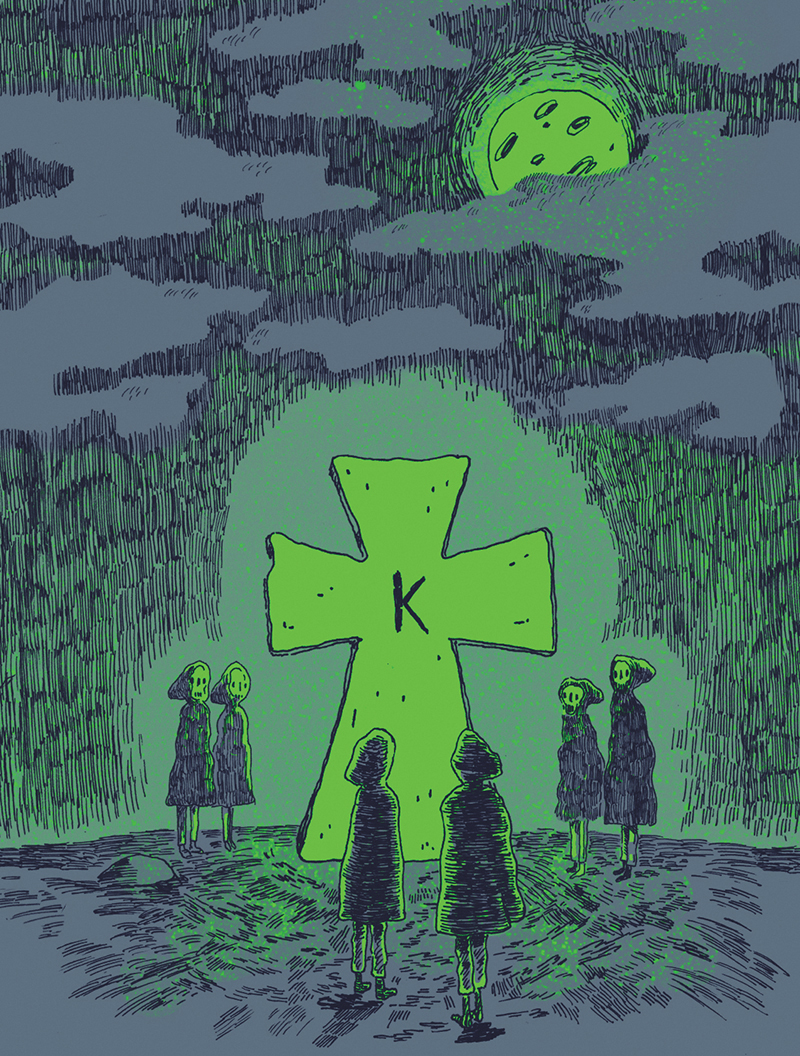 I’ve spent most my life believing in things I can’t see, and for the past 15 minutes, I’ve been telling myself that I don’t believe in the things right in front of me. I don’t believe in the animal remains, I don’t believe in sacrifice and I don’t believe in the 20-foot cement cross blown to bits all over the ground. I don’t believe in the explosion heard for miles that created this rubble. I don’t believe in spooky things of any kind. I believe in jolly winter elves and the idea that a man can live in a whale while travelling to Nineveh. That’s easy for me to believe, but evil—real, paranormal nuisances that are documented and are still being documented—that can’t possibly be real. Scary things are something I pay to see. Evil is a fiction, as fake as social media and usually less scary. I tell myself there is nothing to any of these Kay’s Cross happenings. These are just six ordinary gravestones circling a former cross that’s been blown to bits. Hundreds of people, every year for the past 60 years, come out here because hiking in Kaysville is swell. This isn’t unique. Just stay calm and move along there, Ben, and mind the crushed skull you’re about to step on. Dead, pokey things leave deep marks, and we all know blood is a bitch to get out of skinny jeans.

In 1992, an explosion happened in Kaysville, Utah, which was supposed to be the end to the evil happenings of Kay’s Cross. Kay’s Cross was a 20-foot cement monstrosity that looked as if it was assembled by eager fifth-graders in a van driving through Moab—or my dad the night before Christmas without his bicycle-assembling instructions. This cross sits in the middle of a forest, so you have to imagine that the explosion was pretty big for so many people to have heard it. This explosion is important to the Kay’s Cross lore, because it offers credibility to the hauntings. This wasn’t a place that was rumored to be haunted or the punchline to the storytelling wanderings of old men. This was something so off that in 1992, someone—whose identity is still unknown—blew it up.

Kaysville locals speak of these events so casually that you’d think they were talking about a new diet or doing the laundry. They just yawn, stretch back and say things like, “I saw the dead dogs that were left sacrificed there,” and then go back to their tea and chitchat about local sports. Some locals claim that the police or the land owners blew the cross up to stop the flow of traffic to the cross, but the Kaysville police deny this, and traffic to the cross has only increased as a result of the explosion. The reason for all the fuss: There have been witch sightings and werewolf sightings, and even now, the cross allegedly glows in the moonlight. The area exudes a tremendous sense of creepiness. Sounds of a non-forest nature are rampant, and animal sacrifices in an almost CostCo-like variety are all over. (Apparently, adding squirrel and raccoon to dog sacrifices really gives it that extra satanic kick.)

I put out a feeler to Kaysville folks via social media to see if any of these legends could be verified and received answers like these in response:

“The cross was in our backyard. The whole family has stories. Devil worship, drugs, ghosts.”

“Only went there once. My brothers ran away and tried to leave me. It was terrifying! I do remember clearly the night it was blown up. That explosion was heard miles away! That place was creepy!”

“Kay’s Cross might hold a Davis County record for distance covered while squealing, crying and running in fast motion, cartoon-roadrunner style, for at least a half mile.”

One popular theory regarding where the evilness came from is that the cross was constructed with a dead polygamist’s wife (or heart) inside, and that the graves were from six additional dead wives. Wife-killing in polygamist colonies has the potential for bulk deaths and could possibly be evil enough to haunt an entire forest. Another idea is that Kay’s Cross was constructed by a man named Krishna Venta (formerly known as Frances Pencovic). Venta was a cult leader from California, but according to familysearch.org, a genealogy website, Pencovic had a Utah military record in 1945. Another interesting fact about this idea is that Pencovic was blown up by one of his followers—the same way the cross was destroyed.

All of this adds to the lore of Kay’s Cross, but my favorite detail from all of these tales is the amount of traffic that now leads to this haunt. There are even tours led by Haunted Kay’s Cross (kayscross.com). The key to visiting haunted things is legitimacy, so arriving at a place that looks like the end of a horror movie is pretty convincing. In Utah, we run toward the danger, not away from it. So if there are werewolves, witches and bears (oh, my!), we face those bastards with grit, wit and gluten-free trail mix.

So, is Kay’s Cross really haunted? I suggest you see for yourself.