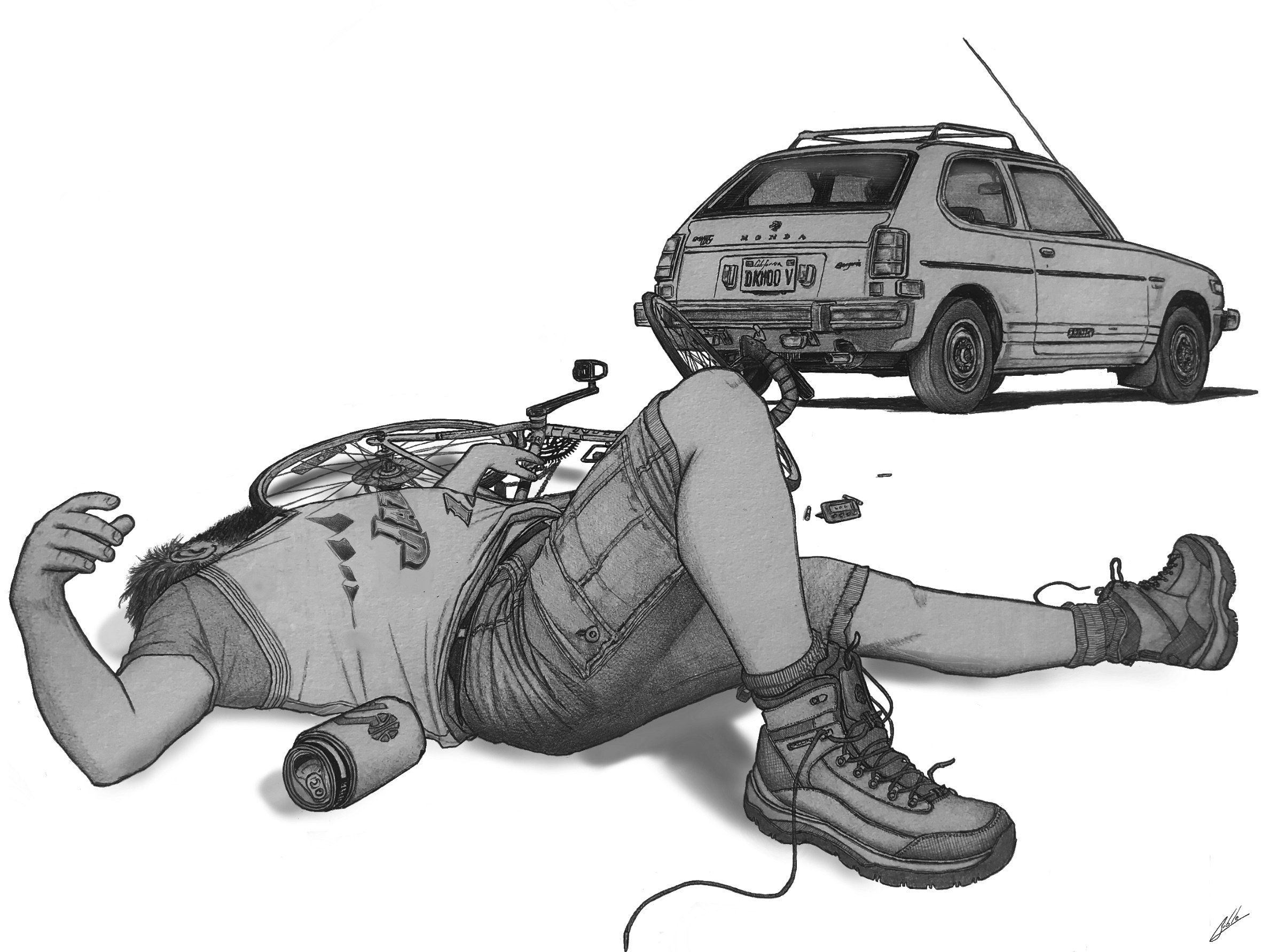 For this year’s Beer Issue, instead of writing or reviewing a tasty, frosty brew—which will be done a lot in this issue anyway—I decided to share a few stories of stupid shit I’ve done while intoxicated. I can’t possibly remember them all because, well, I was wasted for all of them. The hashtag #HoldMyBeer came to mind. So here are some of my finest #HoldMyBeer moments.

The first story that came to my booze-soaked brain was about 13 years ago when I was at a strip club on a weeknight with a friend. I’ve never had any objection to them, but strip clubs just aren’t my thing. The club was pretty dead that night, so it was just me, my buddy and one other group of guys.

For whatever reason (booze), the other group of dudes started talking shit to my buddy. He had terrible dreadlocks at the time and started talking shit back. I vaguely remember the phrase, “Fuck you, cheese dick,” exiting his mouth. And that’s when the bouncers asked us to exit.

Since we couldn’t pee before getting kicked out of the strip club, we walk behind the building and take pisses by the dumpster. And for whatever drunk reason, I start going through said dumpster. I happen to find a fresh paint roller. This is the #HoldMyBeer part—since there were only like two cars in the parking lot of the strip club, I figured one of them had to belong to the guys that tried to start shit with us.

#HoldMyBeer: “I’m going to paint that car’s windows with this paint roller!” I said to my buddy. And I sure did. We proceeded to hide in the bushes and watch the reaction. Yes, I totally painted the car of the dude who started shit with us, and the reaction was priceless. Sometimes fate leaves a fresh paint roller in a dumpster for you.

I was at a house party, drunk and being a total jackass. Me and Sammy Harper, the drummer of Spell Talk, ended up on the roof taking whiskey shots and started peeing off the roof. I don’t think we hit anyone, but we were definitely being dipshits. I don’t know how I didn’t get beat up at the party, but I was somehow politely asked to leave, so I did.

On my bike ride home at about 3 in the morning, a car circled me. Then it swung around and hit me intentionally. Luckily, I was super drunk, so my body was limber and able to absorb the blow without any serious injuries. (This wasn’t the first time I’d been hit by a car intentionally—it was a year prior when my ex-GF mowed me down, but that’s another story for another day.)

I know people in this city, so I called some dudes for backup after I got hit. It was pretty clear the guys that hit me where trying to rob me, but couldn’t when they saw me pop up. I wasn’t able to get a license plate, and I didn’t want to call the cops, based on the experience of my previous intentional mow-down. The legal system sucks on so many levels. I got home safe, and the next night, I was talking with one of my neighbors-at-the-time about the incident.

#HoldMyBeer: The next night at like 4 in the morning, me and my neighbor were talking about what happened. I told him I had no idea who hit me or why, other than it may have been someone I peed on from the roof of the house party. He told me he knew a guy who could find them. I thought he was lying.

I tell him I think he’s full of shit and he’s like, “We can call the dude right now.” I think I’m calling his bluff, so I’m like, “OK. It’s 4 in the morning—call this dude.” He pulls out his phone and makes a call. Turns out the dude exists and was an actual bounty hunter. And not one that works for the cops or any other agency.

The bounty hunter was really nice and we became friends. I don’t know if I ever got my street justice, but oh well, I made a friend. Overall, the lesson I learned is that I shouldn’t pee on people off of a roof while at house parties—or it could lead to accidentally hiring a bounty hunter.

I almost blew myself up in my kitchen over a breakup. It’s totally worth looking up. Me and Abu broke every dish in our kitchen and lit off Roman candles in front of a gas stove, and somehow didn’t get evicted. I’ll leave you with that.